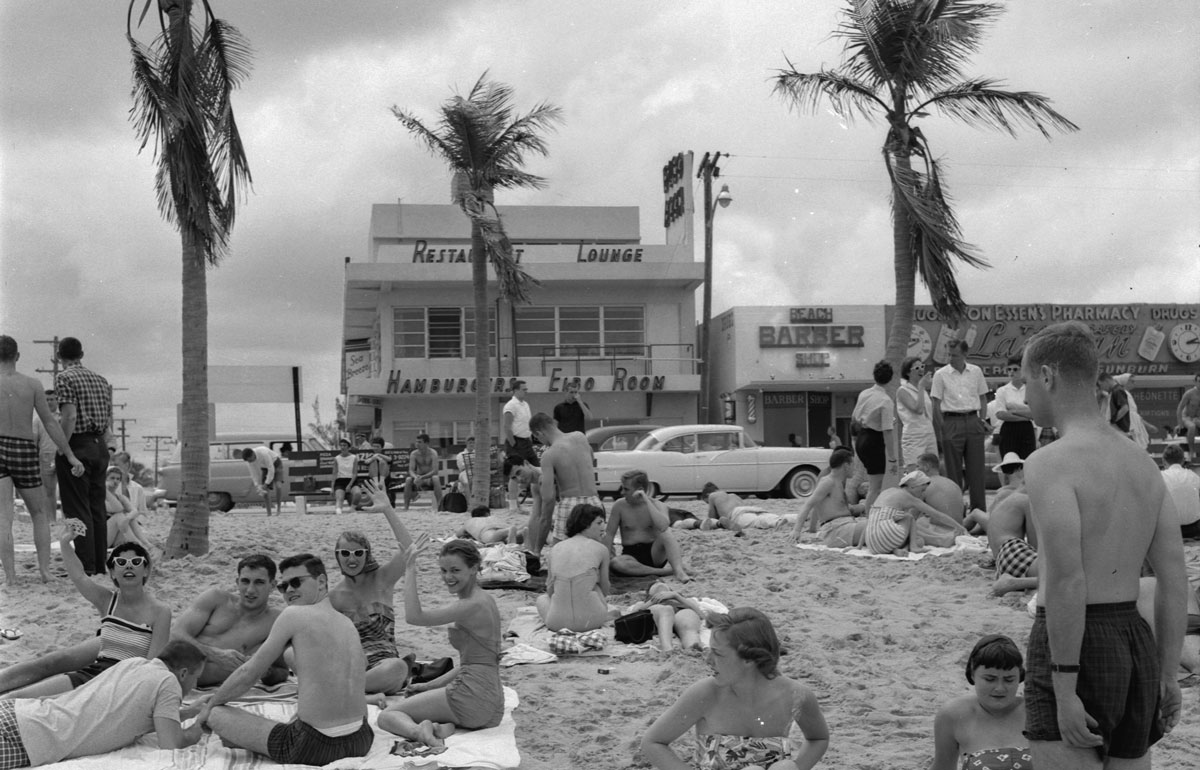 They Still Call It Home

The music is loud, and the crowd is languid on an early afternoon at the Elbo Room. Many of the regulars at the most-renowned corner bar in South Florida already have assembled. People such as Pete Wood, whose bottle of Chandon Brut Classic chills next to his barstool in a metal bucket typically used for icing beers. Wood takes swigs of sparkling wine out of a plastic foam cup as he waxes poetic about the indoor-outdoor spot forever linked to spring break on Fort Lauderdale Beach.

A regular for 11 years, he embraces the role of honorary public relations representative. About six days a week, you’ll find him in his signature cowboy hat, with medallions around his neck and a silver cuff on his wrist, drinking Brut Classic—“It’s my beer,” he explains—socializing with friends and chatting up tourists.

Wood traveled the world while enlisted in the military before he moved to Fort Lauderdale. Now an information technology consultant, his home is roughly an eight-minute walk from his favorite barstool.
“Everything in Fort Lauderdale flows into the beach, and this is the best beach bar,” says Wood, 52. “It is like a magnet—it draws you in. No matter where you start, you’re going to end up on this corner. This is South Florida’s Times Square.”

It’s here, on what is now the corner of South Fort Lauderdale Beach Boulevard and East Las Olas Boulevard, that the Elbo Room’s no-frill charms gained widespread attention as a backdrop in the 1960 film, “Where the Boys Are.” By then, it already had been around for more than two decades, having opened in 1938, but the coming-of-age exploits of Connie Francis, George Hamilton and the other “college students” in the movie turned the beach and the bar into the country’s unofficial spring break haven virtually overnight.

However, as its regulars will attest, the Elbo Room’s legacy extends beyond spring break, beyond even a tourist attraction. It’s become home to a cast of characters that serve as its guardians. They railed and rallied when construction threatened its integrity and, more recently, when rumors of a sale were rampant.

The Matriarch
Michele Penrod likes to sit in the back corner of the bar, near the beer tap, to get a view of the band, the ocean and the people. She grew up in the bar business. Her father, Jack Penrod, owned a few on this Fort Lauderdale strip in the 1970s and ’80s, including Penrod’s on the Beach, an early spring break destination. In 1981, he bought the two-story Elbo Room, with its prime corner lot overlooking the Atlantic Ocean.

For about 15 years, Michele and her two siblings have been equal owners while their father devotes his time to Nikki Beach, the global luxury lifestyle and hospitality brand he founded in 1998. As managing partner, Michele comes in four to five days a week to oversee operations—the good times are just a perk.

“My kids are all grown up now,” she says. “I sold my family home and now I live on the beach, so I can walk to work. I just love it.”

Michele is waving her favorite cocktail in one hand as she speaks. A sandy blonde in ripped white denim, a navy tie-dyed top and hoop earrings, she is a self-proclaimed margarita girl. “I’ve got a couple of boys who know how to do it the right way. I like them strong, but I like them top-shelf, like with Patron.”

Joe Wetzel is one of those “boys,” an Elbo Room bartender for the last six years and a bouncer for two years before that. On a recent Sunday afternoon, he’s busy at the bar, being called from all directions by sweaty patrons in sunglasses, flip-flops and little clothing. At first glance, the burly man is intimidating. He won’t chat with a writer—unless she takes a shot. His unamused facade then cracks into a smile and booming laugh.

“Do you know where you are?” he demands.

To the left, Janet and Briana Carrero, mother and daughter, nod with approval.

“The bartenders, they’re awesome; they’re like your friends,” says Briana, a 27-year-old who had her first of-age drink at the Elbo Room with her sister. Her mom, from Davie, was the one who called to meet up that day. They visit the bar a few times each week, which is convenient for Briana, who lives down the street. They estimate they’ll hang around all day, perhaps about seven hours.

After sharing a Mind Eraser—that’s vodka, Kahlúa and tonic water in a plastic cup—with a customer, Wetzel pushes the sunglasses off his shaved head and onto his face, and motions outside.

“Looking for drunken stories here?” he asks. “Do you have three months? We can tell novels. You ever read War and Peace—that’s what this story is. It’s about that big.”

Sunday Service
“The stories people tell about their bars—‘Eight girls in bikinis came in and danced on the bar stools’—that’s like a Tuesday here,” Wood says.

“There’s so much fun going on, you can’t point to one particular episode. It’s like having a favorite band and saying, ‘What’s your favorite song?’ You’re like, well, they’re all good.”

Wood is hanging with his “group,” a mix of men and women about 15 strong that have gotten to know one another at the Elbo Room over the past decade. They’re day drinkers, he notes, a different crowd from the late-night patrons that also frequent the bar.

For them, “the day starts around noon and ends around 6,” he says.

The group not only gathers and talks regularly, some of its members also vacation together. On this day—Sunday is “Funday” at the bar—they begin, as they often do, with pizza at Spazio (a few doors down from the Elbo Room) before settling in at their favorite watering hole.

“We used to call it church,” says Sandy Fitzgerald, one of the group, of their Sundays at the bar. “We’re all professionals, all hard-working people. And this is our meeting place.”

“I met my wife here,” adds Rick Distefano, motioning to Jackie nearby.

In addition to the bonds that have formed over the years, Wood admits that part of the bar’s allure is mingling with the out-of-towners.

“I thrive off of people,” he says. “It’s one of the most valuable resources you can have. Here, you interact with so many different people—Europeans, South Americans. A lot of them work in town, a lot of them are tourists.

Looks Are Not Deceiving
Michele Penrod glides her finger across a cluster of photos on the upstairs wall. The collages here and on the downstairs tables will be changed out every so often because of wear from sun and rain.

“This is Pops; he lives in Connecticut,” Michele says, pointing to one of the photos. “That’s his son and his son’s girlfriend. He comes here six months out of the year, and he’s here every day he’s in town. It’s like, ‘Pops will be here tomorrow! Pops is back!’ Everyone gets excited.”

Chances are the crowd upstairs doesn’t know Pops. The Red Monkey party on Sunday nights draws 20- and 30-somethings with a disc jockey spinning house music under a disco ball and flashing lights. There’s a metal pole off to the side. Downstairs is known for its daily live music, from noon to 2 a.m. It’s full of Michele’s regular crowd, which skews 40 and older. They’re the reason she works hard to keep the cash-only dive in its original, disheveled glory.

“People come because they hear it’s legendary,” says Julian Vazquez, who sings at the Elbo Room a few Sundays a month with the band Active Radio. “The roof leaks on you, but you know what you’re getting.”

Michele makes no pretenses about the look of her bar. Five years ago, during the building’s mandatory 40-year reconstruction, she had to field concerns left and right about an Elbo Room face-lift.

“Most of my regulars were worried,” she says. “ ‘Are you going to change it and make it more like South Beach?’ I’m like, ‘No, no, it’s going to stay the same, don’t worry—I’m spending half a million dollars to make it look like exactly the same crap.’ ” When it came time to redo the floors, she recalls telling the contractor, “Just throw it on the ground. I don’t want a smooth finish.”

A cleaning crew arrives every day to hose and bleach the upstairs and downstairs. “It’s always clean, even though it doesn’t particularly look it,” Michele quips. “This whole thing, it looks like a mess. I love it.”

Amid the photos on the walls, which have countless layers of paint, are license plates. Ninety percent of the plates belong to someone; most of those owners were anxious as to where their plate might move during the latest paint job.

None of that would matter, of course, if the bar were sold—which was the rumor last year that Michele had to squash. The ground under the Elbo Room is owned by a trust, and when her father took over, he took on the 100-year lease. The Penrod family has every intention of holding onto the bar until at least 2038.

“All these stories of, ‘Oh, they’re selling it,’ well, no, we’re not selling it,” she says. “There’s no reason to. Hopefully, when that time comes, we can strike a deal with that family. For now, no.”

A Family Affair
On top of the downstairs bar is a stack of computer paper, 255 crayons and a laptop with a slideshow of photos and videos on repeat. Wood is taping up photos of a man with tousled gray hair, square-framed glasses and his tongue poking out of his mouth.

It doesn’t take a special occasion to prompt a trip to the Elbo Room—when people ask Wood what he’s celebrating with Champagne (which long ago he convinced Michele to stock), he replies with a shrug: “Wednesday.” But on a warm winter afternoon, a crowd has gathered to pay respects to a friend who had been a regular for so long that no one can pinpoint the span.

Mickey Clean, a Fort Lauderdale punk rocker and caricature artist, has died of a heart attack. He was a local legend, many say after the band stops and the microphone is passed around the room.

“In this day and age, you have a life celebration,” Wood says. “We’ve had many. We usually go out to the beach, but with Mickey, he wanted us to just have fun and have some drinks and remember him that way.”

People make use of the art supplies and try their hand at drawing Mickey, who is “looking down at how terrible we are,” Wood quips. There are tears and there is laughter—remember the time the group decided to make a movie called “Walking Wood,” playing off AMC’s “Walking Dead”? Mickey made a convincing zombie. In the slideshow is the wiry man in gothic makeup and ripped clothes, writhing about the Elbo Room.

Michele remembers when Mickey was convinced aliens were coming; the only way to stay safe, he felt, was to wear foil on his head like a hat. “It was so funny,” she says. “Everyone did that.”

Sometimes it’s bizarre, but it’s home. “Most of the customers really feel like this is their family,” Michele says.

The band begins to play “Wonderwall” by the English rock band Oasis. Wood nods along and looks at the writer.

“You’ll have your own stories before long.”