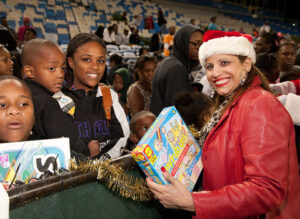 Since starting the John and Elizabeth’s Toy Drive in the home of Dr. Elizabeth King and her late husband, John Weaver, 20 years ago, the John & Elizabeth’s Toy Drive & Fundraiser has distributed over 65,000 toys to underprivileged children. The toy drive began at Dr. King and her husband’s home in West Broward after Weaver suggested their friends bring toys to donate to disadvantaged children instead of providing a gift to King and Weaver. While he lost his battle against cancer in 2018, Dr. King remains committed to continuing his legacy.

When the toy drive began, Dr. King and Weaver would collect and distribute the donations themselves. In 2007, the couple moved near the Las Olas Beach Club in Fort Lauderdale and the club’s influence allowed the drive to expand, which now collects thousands of toys annually.

The 20th Annual John & Elizabeth’s Toy Drive & Fundraiser will last from 6 p.m. to 9 p.m. on Dec. 8 on the first floor of the Atlantic Ballroom at the Pelican Grand Beach Resort in Fort Lauderdale. The event will feature a cocktail reception (guests receive one drink ticket), a cash bar and light refreshments.

For more information or to purchase tickets, visit https://sslwomen.org/event/20th-annual-john-elizabeths-toy-drive/