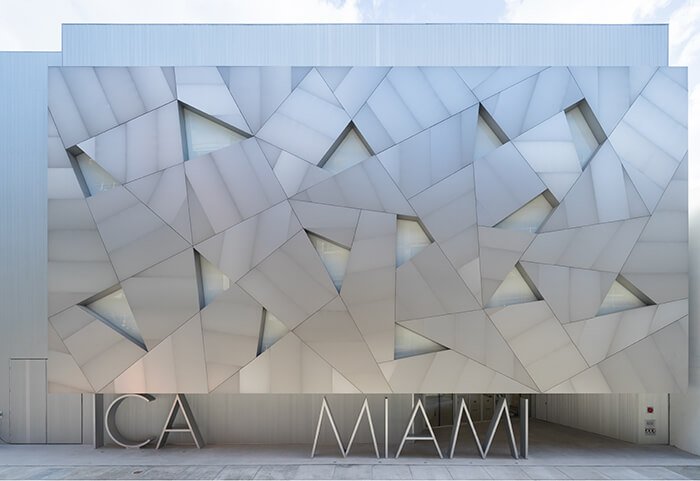 The Miami Design District is a destination for luxury shopping and celebrity chef-driven restaurants, but with the Dec. 1 opening of the three-level Institute of Contemporary Art Miami, the northeast Miami neighborhood got a hefty boost as an arts district, too.

Craig Robins, president and CEO of Miami-based real estate company Dacra, and the developer of the flourishing district, says culture always was part of his plan when he began acquiring and redeveloping properties in the historic Buena Vista neighborhood two decades ago. Before it was the Design District, the area between 36th and 41st streets, between Miami Avenue and Biscayne Boulevard, was home to furniture factories and showrooms and known as Decorators Row. (Years before that, it was a pineapple plantation.)

“Art and design are integral to the historic identity of the Miami Design District and to our vision,” Robins said.

A contemporary art museum in the Design District began three years ago when ICA Miami set up shop in a temporary space that Robins offered rent-free in his Moore Building, a former furniture showroom, built in 1921. It was a few months after the former board of trustees of the Museum of Contemporary Art in North Miami split from the city-run institution and began creating what would be known as ICA. Irma Braman, former MOCA board chair, is now co-chair of the board of trustees for ICA Miami.

The timing couldn’t have been more perfect. Just ahead of Miami Art Week 2017, the privately funded ICA opened at 61 NE 41st St. Braman and her husband, Norman, who are local philanthropists and art collectors, funded the design and construction of the new ICA. Miami Design District Associates, a partnership between Robins’ company and L Real Estate, a private-equity fund dedicated to luxury retail developments, donated the land on which the 37,500-square-foot art museum was built. The space includes a 15,000-square-foot outdoor sculpture garden. One of ICA Miami’s missions is to offer its exhibitions to the public at no charge. Many of its educational programs will be provided free, too.

“One of the barriers to access to a cultural institution is admission. I think this tears down at least one of those barriers,” says Ellen Salpeter, who was named ICA Miami’s director in 2015, after serving as director of external affairs of the Jewish Museum in New York since 2012.

“We made a real commitment to have open access so that when you visit the Design District, whether ICA Miami is your destination or you come to do something else, you can come into the museum at no charge,” she says.

Salpeter says the building’s location works with the shopping district’s pedestrian traffic. Already, there are plans for the next phase of the museum, which include a visitor store in the lobby, with grab-and-go foods, cold-brew coffee and Champagne. There also will be partnerships with nearby businesses—“perhaps a dinner in the sculpture garden with one of the restaurants here, for example,” Salpeter says.

Yet the art remains essential. Salpeter is excited about the inaugural program as she talks about “The Everywhere Studio,” which brings together more than 50 artists from the past five decades.

One inclusion is a work by Edward and Nancy Kieholz, which is part of ICA Miami’s permanent collection and what she considers an example of what the museum’s holdings will mean to visitors. The significant sculpture by the couple, “The Soup Course at the She-She Café” (1982), will be on display as part of the exhibition.

The museum has borrowed from collectors other works by the couple for the exhibit. “This will help tell a story to visitors, so that they may gain more insight as to why this work is in our collection, and offer a broader perspective of our collection as a whole,” says Salpeter, adding that ICA Miami’s contemporary collection has a specific time period—from the early 1960s to present. “If you know nothing about contemporary art or if you’re a savvy art connoisseur, we want you to discover something, take a look at what we’re doing, and be excited by whatever attracts you.”

Robins believes art should be shared and experienced. “We want to make art accessible to everyone,” he says.

To that end, the district holds public art tours, led by Arts Encounters founder Margery Gordon. Participants may reserve a spot online, but walk-ups are welcome. The free tours are held during the the monthly Sunday Family Day and on the last Wednesday of every month during The Market #atMDD. Check miamidesigndistrict.net/art-tours for dates.

The district also unveiled several installations during ICA Miami’s grand opening in December, including a new public sculpture initiative, in collaboration with the museum. The annual rotation began with the installation of two monumental sculptures by artist Sol LeWitt.

Also, a 1988 outdoor sculpture by artist Kenny Scharf, once part of Robins’ personal collection, was moved from his Miami Beach home to Rooftop Garden (175 NE 40th St.) to join the district’s permanent collection.