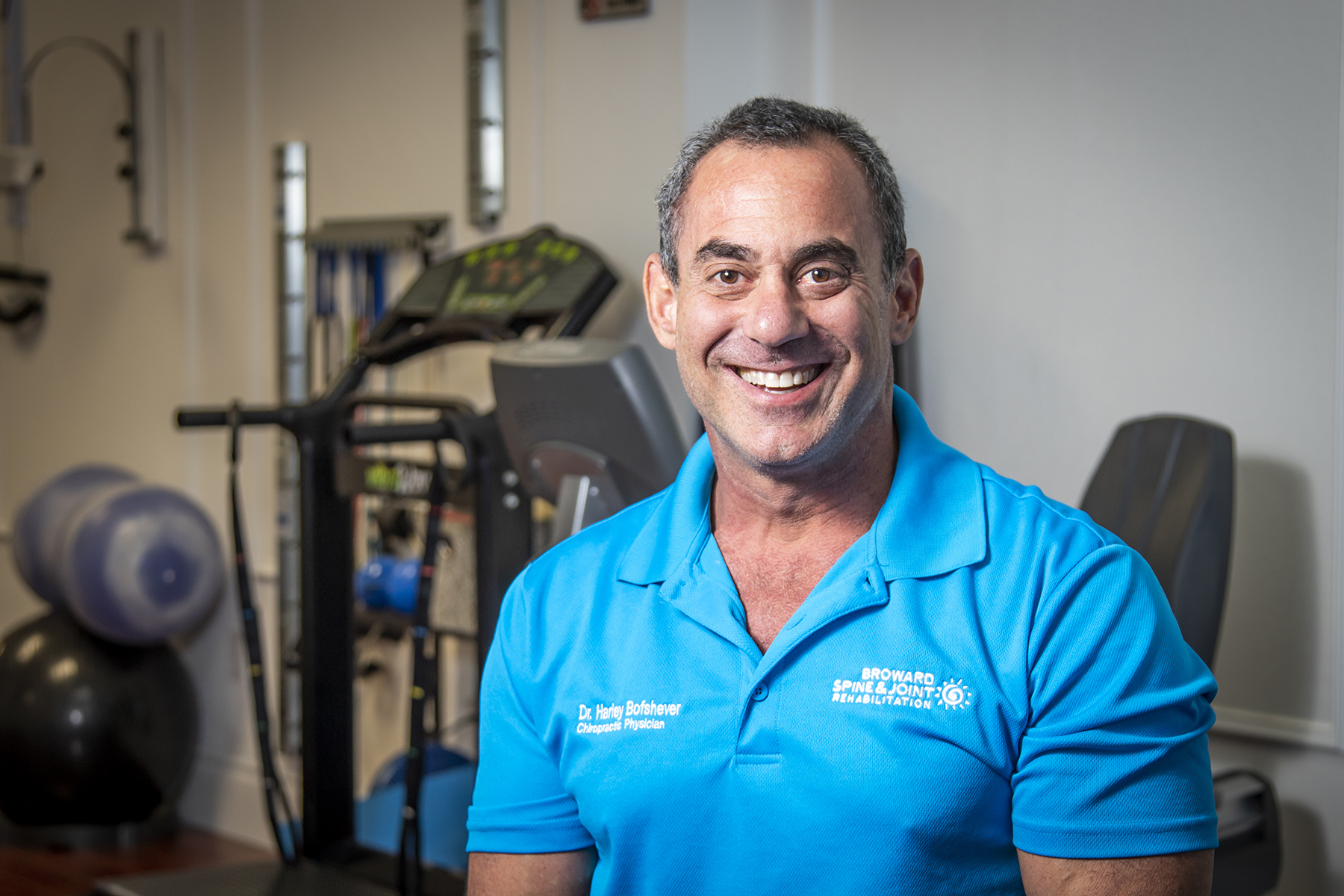 Not Much of a Stretch

Harley Bofshever has spent most of his life paying forward the help he received as a teenager. While a high schooler in Coral Springs, he hurt his shoulder playing baseball and tried therapy and injections to stop the pain. It wasn’t until he went to a chiropractor that he found relief.

The experience led him to start a career as a chiropractor. He studied nutrition and sports medicine at the University of Alabama and attended Life Chiropractic College in Marietta, Georgia, where he earned his doctor of chiropractic degree.

“I’ve always just wanted to give back to other people and help as much as I can,” he says.

When he returned home in 1994, he opened a practice with his brother in a Coral Springs. But his own injury changed the way he approached his career and patients. In 2005, he fell 15 feet off his roof while making repairs after Hurricane Wilma, resulting in years of therapy.

“I think it really humbled me a lot,” he says of his injuries. “It really made me have a lot of empathy toward people … When somebody comes in here and they’re in tears, saying, ‘You don’t understand.’—No, I do. I’ve been there. Every back pain is different, but I get back pain. I live with it 24/7.”

Seven years ago, he returned to full-time work, opening Bofshever Wellness Center in Coconut Creek, where he lives. Over the years, Bofshever realized the importance of the synergy of chiropractic care and physical therapy, leading him to rebrand his practice this year. At the renamed Broward Spine & Joint Rehabilitation, Bofshever works with a physical therapist, massage therapists and a medical doctor to help patients.

“[With chiropractic care], we are restructuring the spinal cord, making sure all the bones are back where they belong, and with physical therapy, we’re able to strengthen the musculature to hold everything in place so they can prevent injuries in the future and make chiropractic [treatments] last,” he says.

Go for the long haul. Seeing a chiropractor and physical therapist isn’t about finding short-term solutions. It’s about learning how to exercise properly to prevent injuries and stay healthy. “I can adjust you all day long,” he says, “but if we don’t strengthen and train the musculature, we’re not making structural changes.”

Sweat the small stuff. Bofshever often sees patients who ignored “little aches and pains,” and regretted it later; having pains checked out may lead to catching a problem early and possibly preventing future surgery. “If you have a decrease in range of motion, if you’re getting less flexible—these are all signs [that something is wrong], ” he says.

Follow through. When patients do seek proper treatment for an injury, they are tempted to discontinue once the pain stops. But the effects of an injury can linger, so Bofshever advises patients finish their care plans. “The injury still has to heal after the pain is gone, and muscles and tendons take weeks to heal,” he says. “If you’re not going to do therapy to get it stronger while it’s healing, it’s going to heal weak, and it’s more likely to tear in the future.”

Get moving. While many of Bofshever’s patients seek treatment following accidents, he also sees people whose neck and back pains stem from repetitive microtrauma, sometimes caused by sedentary lifestyles. “I’m getting that 25- to 30-year-old patient who says, ‘My neck’s just been getting stiffer for the last couple of years and I don’t know why,’ ” he says.

To counteract these problems, Bofshever recommends regular movement. At work, get up and stretch, take a lap around the office or lean back in your chair. “Do the opposite of what you’ve been doing,” he says. “You’re leaning forward with your arms in front of you? Spend two minutes with your arms behind your back and stretch your chest out.”

Also, be aware of posture while using technology. Position your computer screens so you don’t have to bend to see it, and keep your hands up when using a phone.

“The further down you look, the worse it is on your neck because the human body is designed to be looking up,” he says.

Stay healthy. At the end of the day, staying healthy should be a natural part of an active lifestyle that includes exercising for 30 minutes at least four times a week, and counteracting sedentarism. “The more sedentary we get as a culture, the worse and worse our health is getting,” Bofshever says. “We’re living longer but we’re not living healthier.”