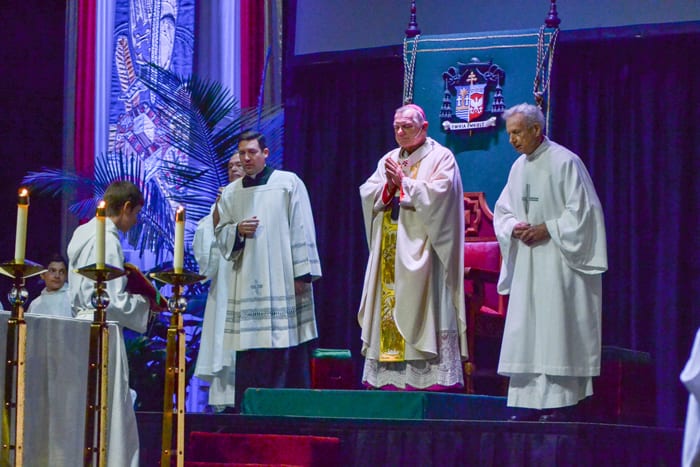 A Church with Open Doors

When St. Louis Catholic Church marked its 50-year Jubilee this past November 23, it celebrated with more than 4,000 parishioners in the cavernous Bank United Center on the University of Miami campus. Some of those in attendance had been parishioners a half century earlier, when the church conducted its first masses in the non-air conditioned Palmetto High School auditorium.

A permanent church building was dedicated two years later and, as a sign of the times, then-Archbishop Coleman Carroll told his flock about the wave of change coming in the wake of Vatican II. Those changes, he said, would make sure the Church would “have greater vigor, greater spirit and a greater attraction to those who are our separated brethren.”

The Second Vatican Council, as it’s officially known, was a three-year religious conference that set the stage for a more open church, attuned to the needs of the community rather than the formal rules of Catholicism. The new St. Louis Church was determined to pick up the baton and become what parish historian Irene Tomonto describes as “a truly post-Vatican II family-oriented parish.”

That sense of openness and community outreach has been a hallmark of St. Louis ever since then. Father John Nevins, who became pastor in 1972, continued to promote the message that the church ought to be concerned with things beyond parish boundaries, “including the surrounding area and the needs of the people who live there.”

Extending the mission of ecumenism – the idea that the church should embrace all Christians and not just Catholics – came the interfaith movement. The parish became involved in 1971 when Pinecrest’s Temple Beth Am began an annual Interfaith Musical. The St. Louis choir and women’s club participated. An Interfaith Day was later established, jointly sponsored by the Synagogue Women of Dade County, Church Women United of Greater Miami and the Miami Archdiocesan Council of Catholic Women.

St. Louis went through physical changes as well. Under the stewardship of Father David Russell, who came to the parish in 1974, the mortgages on existing buildings were paid off and plans were developed for a new building. As Father Russell quipped at the time, “You didn’t think we weren’t going to use that land for something more?”

The result was the huge dome structure of today’s church, dedicated in 1980. Its size belied the fact that Father Russell purposely wanted the space to have less seating than the original church, to make sure people sat closer together. The semi-circle arrangement of the pews also meant parishioners could see each other at mass.

Father James Fetscher, who replaced Russell, himself secured high marks for his relationship with the Jewish community. In February 1988, Temple Bet Shira – located just west of St. Louis on 120th street – was vandalized. As a sign of solidarity, St. Louis erected a Star of David in front of the church worship space viewable from 120th street.

It remained up through Lent and was there during Holy Week and Easter. On Easter weekend, a visitor drove in and asked if this was a Catholic church. She was assured it was, but said it couldn’t be with the Star of David in front. The policeman helping to handle traffic confirmed the denomination. “Lady it’s Catholic,” he told her. “That’s what it says on the checks they pay me.”

Father Fetscher became such close friends with Rabbi David Auerbach that the rabbi had Father Fetscher deliver a homily at a Friday night service at Bet Shira. Afterward Rabbi Auerbach said his congregation was greatly moved because, as he put it, “Jews often feel alone.” Later Temple Bet Shira made Fetscher “Man of the Year,” the first non-Jew to get the honor.

But nothing has been as important to St. Louis as remaining open to those beyond its parish. Its New Life program for troubled teenagers is so popular that it’s frequented by kids who don’t attend the parish. The Festival for the Poor is an annual event in the spring that raises money for the needy in the community. The parish also supports an impoverished diocese in Port-de-Paix in Haiti.

Within the St. Louis Church there is a worship space called the Adoration Room for the Blessed Sacrament. That room, as well as the main church doors, remains open 24 hours a day. It is open for spiritual comfort to members of any faith. The practice was started by Father Fetscher, and has been continued by the current pastor, Father Paul Vuturo. “As far as I know, St. Louis is the only church in South Florida where the doors are never locked,” he says.