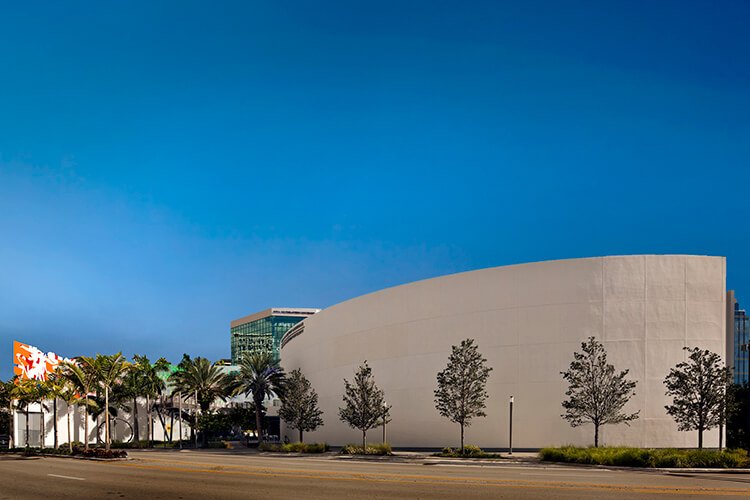 When Bonnie Clearwater left North Miami’s Museum of Contemporary Art in 2013 to join Nova Southeastern University Art Museum Fort Lauderdale, she knew in due time that she’d be running an art institution that would hold its own against any other city’s museum.

At the time, Clearwater was quoted as saying that Fort Lauderdale was “almost where Miami was 15, 16 years ago, pre-Basel,” referring to Art Basel, the international art showcase held annually in Miami Beach.

Five years into her NSU tenure, the museum’s director and chief curator says the art world is taking notice of an institution celebrating 60 years. It began in 1958 as the Fort Lauderdale Art Center, a project of the Junior League and housed in a former hardware store.

“There’s a renaissance going on in Fort Lauderdale, and a good deal of that shift is to our end of Las Olas,” Clearwater says. “Here you have a museum in the center of all of this new [downtown] development.”

It’s not just locals who are flocking to the 75,000-square-foot modernist building at 1 E. Las Olas Blvd. South Florida’s new express commuter rail service, Brightline, the privately funded train line that runs from downtown West Palm Beach to downtown Fort Lauderdale (it was scheduled to add service to downtown Miami in May), is bringing a whole new audience to the museum doors, about a half-mile from Brightline’s Fort Lauderdale station.

“We are getting trainloads of visitors from Palm Beach,” Clearwater says. Local artist Bruce Helander brought a group from Palm Beach to the museum on a special “art train” trip soon after Brightline debuted in January, and Clearwater says Helander hopes to continue the trips. Helander told the Palm Beach Post he started the trips because “people don’t seem to realize that the Fort Lauderdale museum is one of the greatest museums in America.”

Clearwater remembers the day she decided to take the job after being courted by the Fort Lauderdale museum for a few years. She replaced Irvin Lippman, who retired in 2012 (but who went on to become executive director at the Boca Raton Museum of Art). “When I left Miami to come here, one of the things I expressed to the public was that I had not left Miami, but that I was expanding the South Florida arts scene northward, so we would have a continuous art coast from Palm Beach to Miami with Fort Lauderdale in between.”

One of the museum’s most impressive assets, but not widely known, is its collection of 7,000 works, which Clearwater says “puts us in a position to become one of the strongest research museum in the country.”

Collectors started giving to the museum in the 1970s, the first being a gift from Fort Lauderdale resident Lenore Hartt, who offered her extensive Native American collection. “At the time, there really weren’t any museums in South Florida other than the Norton [in West Palm Beach] and the Lowe [at the University of Miami] that were collecting,” Clearwater says. “My predecessors made the core of the collection—the traditional arts, such as pre-Colombian works, African-American, oceanic tribal arts and Native American—to have resonance with the multicultural nature of South Florida, and from that collection they built on an interlocking narrative.”

Fort Lauderdale had—and still has—some serious art collectors willing to donate, lend or bequeath their collections to the museum. In 1978, Meyer and Golda Marks made their first donation from their prized collection of CoBrA art. The Markses were major collectors of CoBrA works, an acronym for the artists from Copenhagen, Brussels and Amsterdam who started the movement. In 1991, upon Meyer’s death, the collection was donated in whole, giving the museum the distinction of having the largest CoBrA collection in the Western Hemisphere.

Stanley and Pearl Goodman began collecting Mexican and Latin American art in 1991, when many of the artists were underappreciated by the international art world. In 2012, they promised 75 works from their collection in a bequest to the museum, including pieces from Frida Kahlo, Diego Rivera, Rufino Tamayo, Wilfredo Lam and others. The Goodman Latin American Art Study Center in the museum, initiated in 2016, houses books and archival materials collected by the couple.

Also in 2016, the museum received a significant promised gift of 100 works from the contemporary art collection of David Horvitz and Francie Bishop Good, who have amassed works of multicultural and female artists.

Other art in the NSU museum collection includes works by Frank Stella, which is on display through July in an exhibit curated by Clearwater; “Frank Stella: Experiment and Change” kicked off the museum’s 60th anniversary celebration when it opened in November. Clearwater says she’s the only curator other than the late William Rubin of New York’s Museum of Modern Art to organize two major Stella exhibitions.

There’s also the Glackens Art Collection, the world’s largest collection of the American realist painter, bequeathed to the museum in 1991 by Ira Glackens, the artist’s son. The museum’s senior curator, Barbara Buhler Lynes, curated the exhibition, an idea sparked because of yet another donation.

Clearwater explains: “Drs. Walter and Mildred Padow of Plantation, who have one of the most remarkable collections of historical prints, gave us three major Alphonse Mucha posters from the late 19th century, early 20th century.” The Padows’ collection was featured at the museum in 2016 in an exhibition titled “Five Centuries of Prints from Rembrandt to Picasso.”

With the newly donated posters, and the extensive work of Glackens, Clearwater knew there was another exhibit to be mounted: “Midnight in Paris and New York: Scenes from the 1890s-1930s, William Glackens and His Contemporaries,” shows many of the works in the museum’s collection, including a new donation, Glackens’ 1907 “Patriots in the Making.”

“We continue to attract collectors locally, but we now have people reaching out from New York and Palm Beach who want to give major works to this museum,” Clearwater says.

With an eye on getting noticed outside of South Florida, Clearwater says the museum is in the process of launching an online research center devoted to its Glackens and CoBrA collections.

“With the digitizing of these collections, the access to NSU Art Museum Fort Lauderdale will be worldwide,” she says.

1958: Stephen Bowen of the Marie Harriman Gallery in New York City initiates the idea of an art museum in Fort Lauderdale. The local Junior League takes on the project, creating the Fort Lauderdale Art Center. It opens at 625 E. Las Olas Blvd.

1967: A fire breaks out and forces the museum to search for a new home.

1969: Art Center president Mary McCahill and board member James Farquhar (who also served on the board of what then was Nova University) relocate it to the Nova annex (426 E. Las Olas Blvd.).

1971: Nova gives the building to the museum, and its trustees purchase the land. The name is changed to Fort Lauderdale Museum of Art.

1986: Some 4,000 visitors attend the Jan. 18 opening of the new building. Its $7.5 million price tag is funded privately by 500 corporations and thousands of citizens. The state designates it as a major cultural institution, and it becomes part of the city of Fort Lauderdale.

2008: Nova Southeastern University enters into a partnership with the museum, bringing the museum and the university together again. As NSU works to become a top research university, adding the museum helps the effort, because it allows scholars to access its collection.