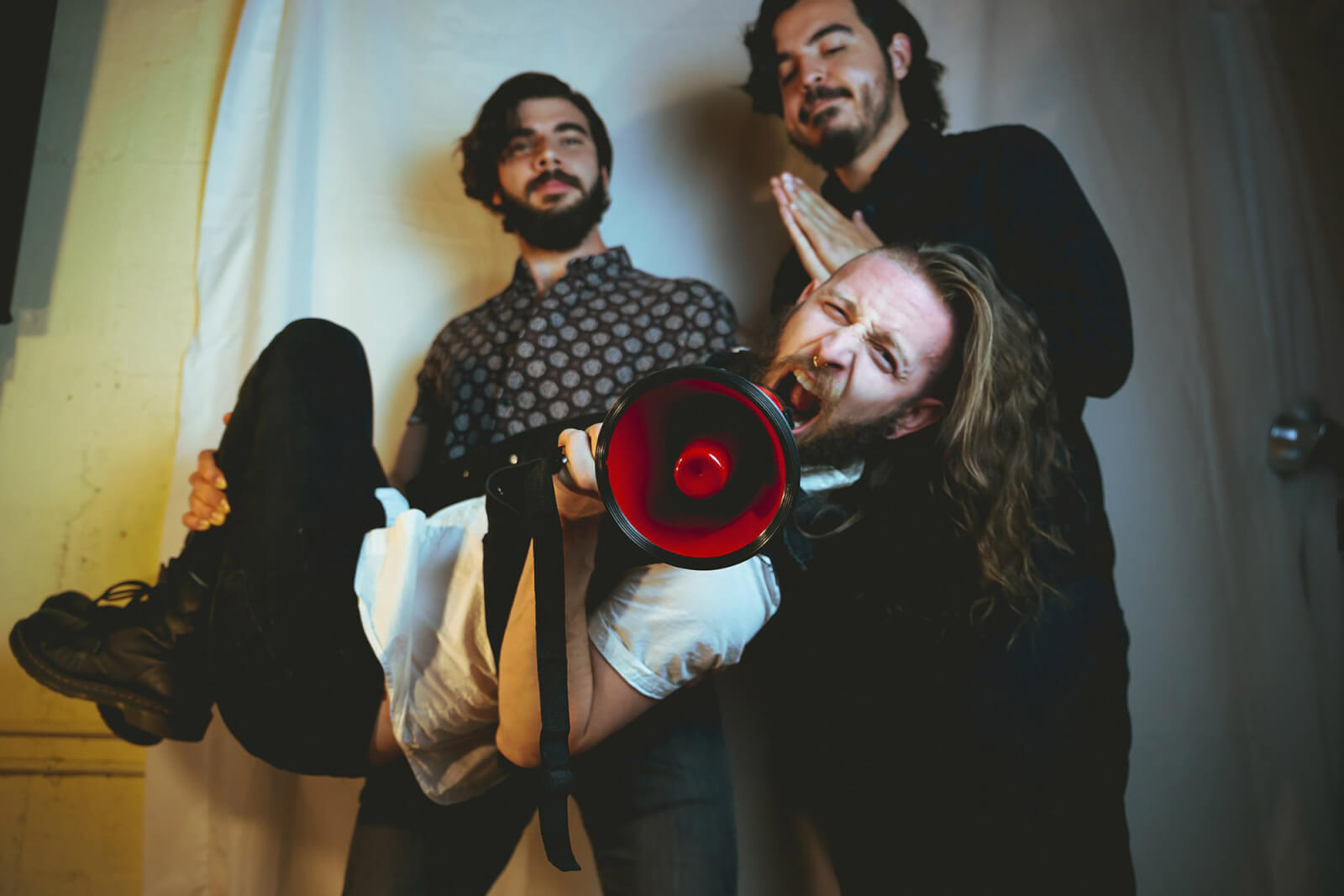 Jared Steingold, bassist for the Miami-based SunGhosts, looks like the dictionary definition of bliss when he’s performing with his band. A smile never leaves his face, even as he closes his eyes to revel in passages of a song. The carefree, focused energy of the band’s shows is constantly stoked by SunGhosts’ charismatic frontman, lead singer and guitarist Nik Olas—and rounded out by Louie Estopiñan’s powerful drum beats.

It’s a collaboration that never fails to produce compelling live music. Despite changes to its lineup, the consistent strength of its performances has allowed SunGhosts to rise through the ranks of Miami’s underground rock music scene. It’s also a big reason readers of Miami New Times called the once-four-man group the “best band in Miami”—and why that tag still resonates with their current three-man incarnation.

Olas says the band’s background is a bit like how “the Avengers came together, little by little.” He first connected with Steingold at a house party in 2013, though the pair’s bond wasn’t cemented until they jammed at Olas’ house for two hours. Guitarist Arminio Rivero (no longer with the band) then brought in his childhood friend, Estopiñan, to play drums. Estopiñan believed in the band so much that he quit his gig with a Top 40 cover band that played at Blue Martini.

After building considerable local buzz for a few years playing live at clubs in and around Miami, SunGhosts signed a two-year deal with Orchard House Music, leading to their self-titled 2016 album—and a 30-day tour in 2016 that went from West Palm Beach to as far as Chicago.

The band’s debut release featured a mix of influences to complement an indie-rock foundation. Some songs, like “Hydro Pump” and “Sweet Water Girl,” conjure images of relaxing on a towel under an umbrella on a sunny beach. The band calls these types of songs “sun-drenched.” Other songs, like “II” and “My Shining Phantom,” bring in the heavier guitars, drums and deep bass that are sonically the opposite of the aforementioned songs. Somehow it all makes sense on the album.

The name SunGhosts comes from a line in a song by one of Olas’ old bands: “a carousel waltz with sunlight specters.” Says Olas, “I liked the imagery it evoked—so mysterious, yet embodying this duality that seemed ever-present underneath all layers of existence. I shortened it to SunGhosts and it just clicked.”

In late June, SunGhosts released “Oathkeeper” at a party at the Open Stage Club in Coral Gables. The EP is its first without Orchard House; the band self-released its third album. Asked whether the group feels pressure to push beyond best-band-in-Miami status and make an invested run at reaching a larger audience, Estopiñan takes a when-it-happens-it-happens approach.

“No pressure at all,” he says. “Titles and labels can only go so far with explaining things. ‘Best band’ is a cool thing to have in our career, but we definitely don’t stand by it. We stand by creating music that moves us, and [we stand by] everyone that digs it, and the live experience.”

“Oathkeeper” represents a darker turn for SunGhosts’ music, with titles like “Broken Mirror” and “Cold Rituals”—the videos for which were shot by Rivero, who left the band to pursue a film career. “Broken Mirror” is a “heartbreak song” about how pursuing true love can be painful. The latter was written during a deep depression Olas experienced in 2017. They’re both slower songs musically, though the instrumentation and whistle on “Cold Rituals” make it a song that listeners will want to leave on repeat. It’s also Olas and Estopiñan’s favorite song to play live.

Fans of the sun-drenched sound shouldn’t worry too much, though. Says Olas, “there is still the high energy and sun-drenched rock-n-roll flavor that SunGhosts once basked in. It’s present there, but it’s much more.”

The connective tissue for the members of SunGhosts is their love of music: Estopiñan’s love of Circa Survive and Rascal Flatts’ harmonies on “I’ll Be Home for Christmas,” Olas’ love of videogame music, such as Kingdom Hearts, and Steingold’s love of metal. That tissue has allowed them to build a bond that begs to be witnessed.