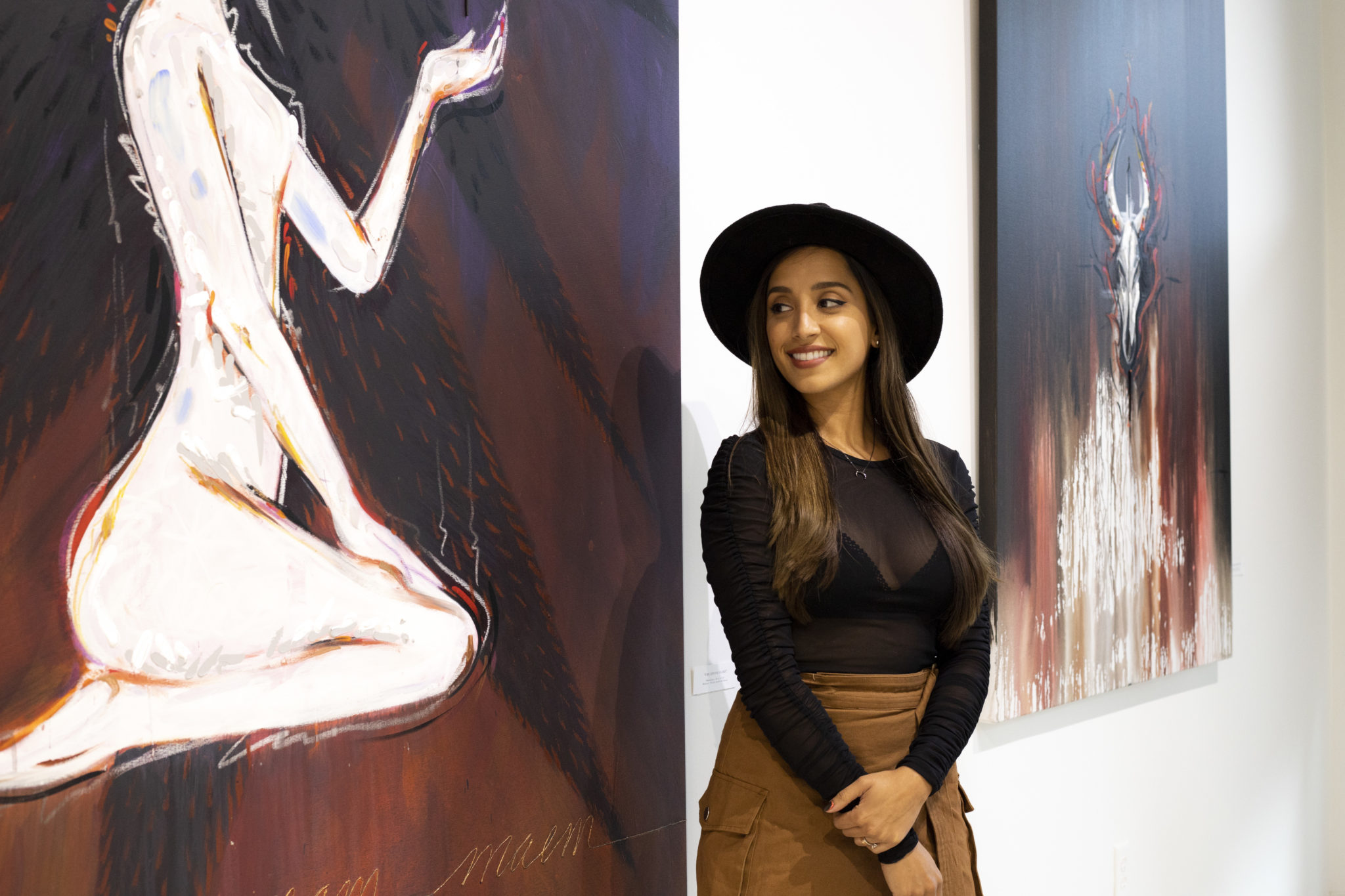 Artist Gloria Hernando has plenty of reason to bullish

Gloria Hernando is steadfast in her belief that everybody has a bull inside them. But as the emerging Miami-based artist’s own journey suggests, it’s one thing to recognize the symbolism and another to take that spirit by the horns—and run with it.

Before the 28-year-old debuted her first solo exhibition this spring at Paradise Plaza in Miami’s Design District, a pop-up series of mostly large-scale paintings titled “Seven Fires” that captures the male bovine head in striking incarnations, Hernando was still wrestling with the bull inside her. 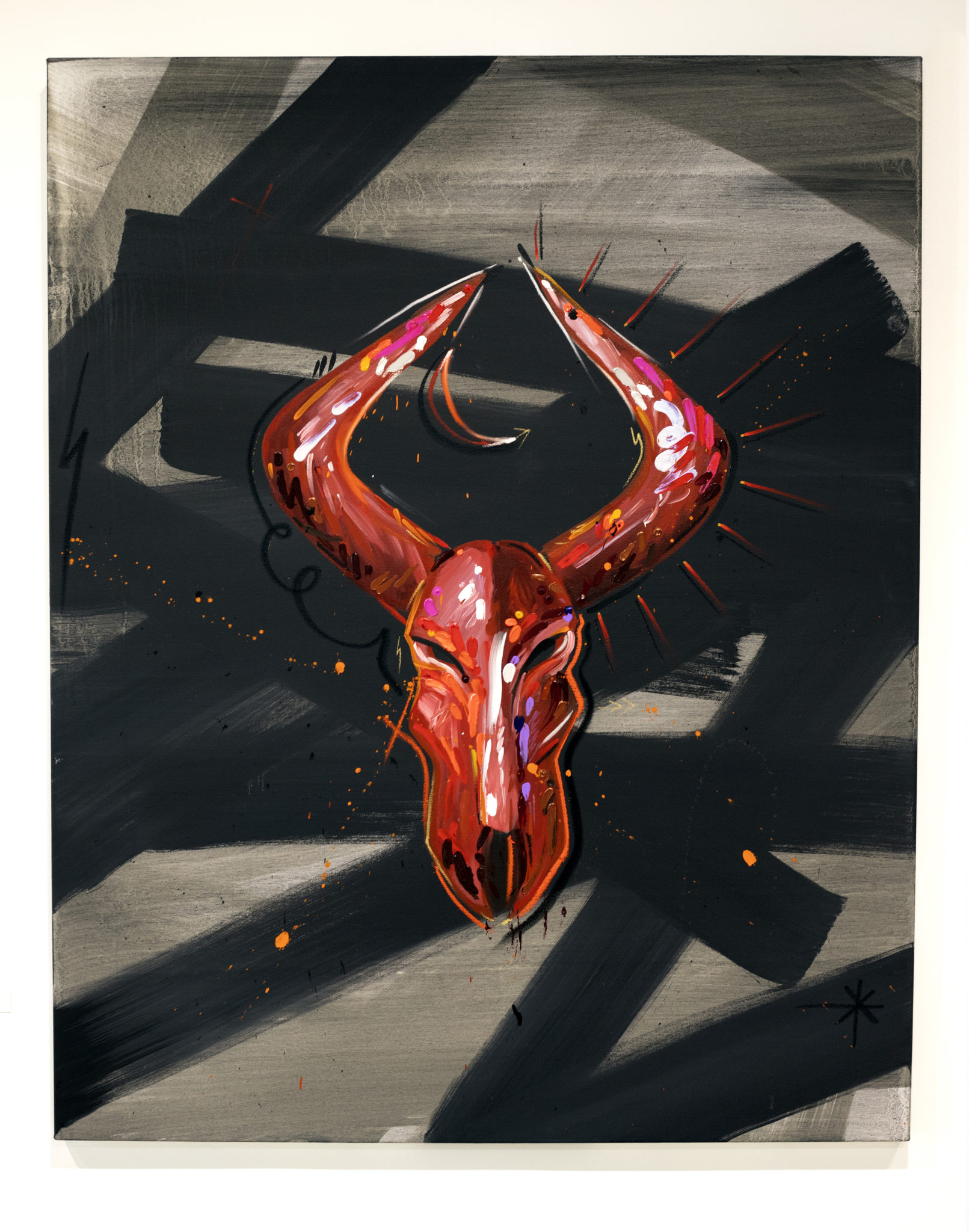 Heat of the Moment by Gloria Hernando

Born of parents from the Dominican Republic, Hernando took to colored-pencil drawings at a young age; she has sketch books dating to when she was 4. But that talent manifested itself in technical terms at first. A trip to Paris at 15 left Hernando obsessed with the scale and structure of buildings, an interest that led her to briefly pursue architecture at the University of Miami.

When professors questioned why she had to place furniture inside all of her floor plans, she realized that perhaps her true passion lay in how people interacted with space; she promptly transferred to the University of Florida, where she graduated in 2013 with an interior design degree.

By this time, Hernando already had created her multidisciplinary brand, Latin for Glory. Her illustrations and pencil drawings resulted in freelance creative collaborations with fashion and shoe designers, but looking back, she admits that the years after college were more about hedging her bets rather than going all in as an artist.

“I was scared of pursuing my dream,” says Hernando, whose day jobs in recent years included working at an interior design firm in Miami, and as a press coordinator/design assistant for a luxury Italian shoe brand. “There’s a lot of security in something like interior design—and a big demand for it in Miami. How could I leave that security and do something as elusive as artwork?”

It took a series of episodes in her 20s for Hernando to finally answer that question—and discover her inner bull. The first, the divorce of her parents while she was at UF, produced a revelation.

“It was a sequence of three years where the nucleus split; even our family dog died,” she says. “Everything about my childhood was crumbling. And I was very much in love with my childhood.

“My outside world was insecure, but it made me become more secure internally. I turned inward to find my power. That’s when the bull really became my symbol—the courage, the strength, the perseverance. Finding that animal inside me got me through that period.”

It didn’t hurt that, a few years after college, Hernando bought a one-way ticket to Spain, a country that not only celebrates the bull but that embraces the arts. The year she spent there freelancing, traveling, and touring museums and galleries, “planted a seed for me,” she says. “I didn’t realize it then, but it started creating my vision to be an artist.”

“Miami hasn’t always been supportive of emerging artists. It’s been supportive of the arts, and international artists and major events like `{`Art`}` Basel. But now, finally, they’re starting to realize that there is emerging talent that wants to make a difference and has something to offer.”

That seed took root last November, when Hernando quit her marketing job (for an interior design firm) and committed fully to the artist’s life. She was overcome by a sense of 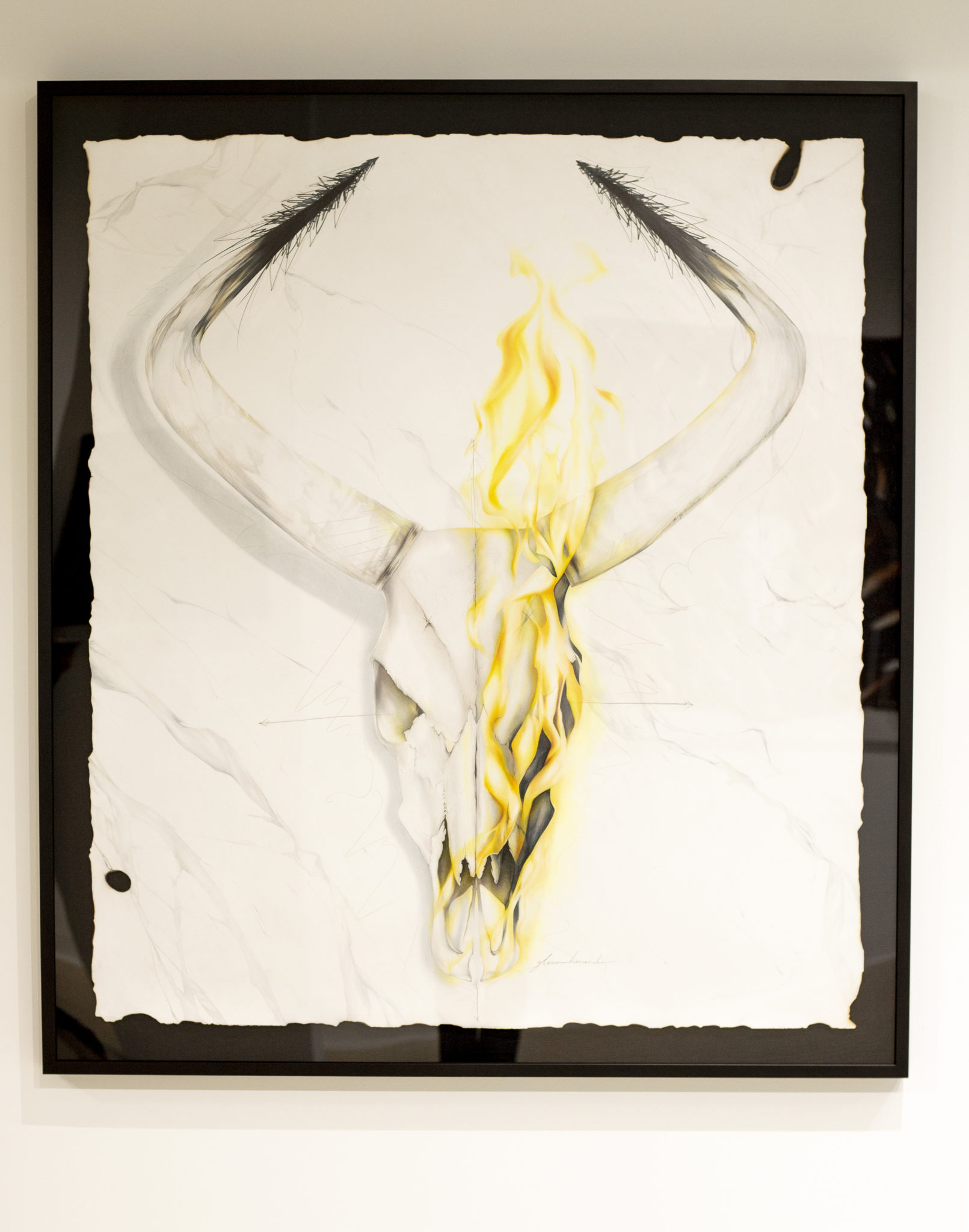 peace and purpose. The next morning, she went to her studio and worked all day on “Spellbound,” which would become part of the “Seven Fires” series. Its red-to-orange, sunset-like gradient signified a new beginning. She soon completed “Ignis,” the only colored-pencil drawing among the pieces in “Seven Fires” and a project, started months earlier, that ultimately consumed 250-plus hours.

“To do something that takes 250 hours? Halfway through, it’s like, ‘Why did I start this?’ But it’s about pushing through,” says Hernando, who married her longtime boyfriend two years ago. “So, yes, the [bull] in my work has taken over who I am.

“I opened the door to my potential by quitting the part of my life that was making me unhappy.”

Though the bull was prominent in “Seven Fires,” the underlying thematic thread spoke to the first of six elements that she’ll explore in an ongoing series, “Elementa.” The next collection, set around the concept of light, will debut this fall.

With its symbolic connection to transformation, however, fire proved an appropriate springboard for the series; it marked Hernando’s first serious foray into acrylic painting (with some use of oil paints for detail work).

“The whole collection is about taking the dark moments in life and making something good of it,” she says. “Fire is passion and inspiration, but it’s also destruction and fear. So, it’s about being real with tougher moments in life and using that to become a more powerful human being.

“I feel [that empowerment] when I push a boundary. Change is comfortable now, where it wasn’t in the past. There’s a lot of growth on a personal level that happens when I paint something I haven’t painted before. Each time I push myself, I think I’m getting closer to who I really am.”