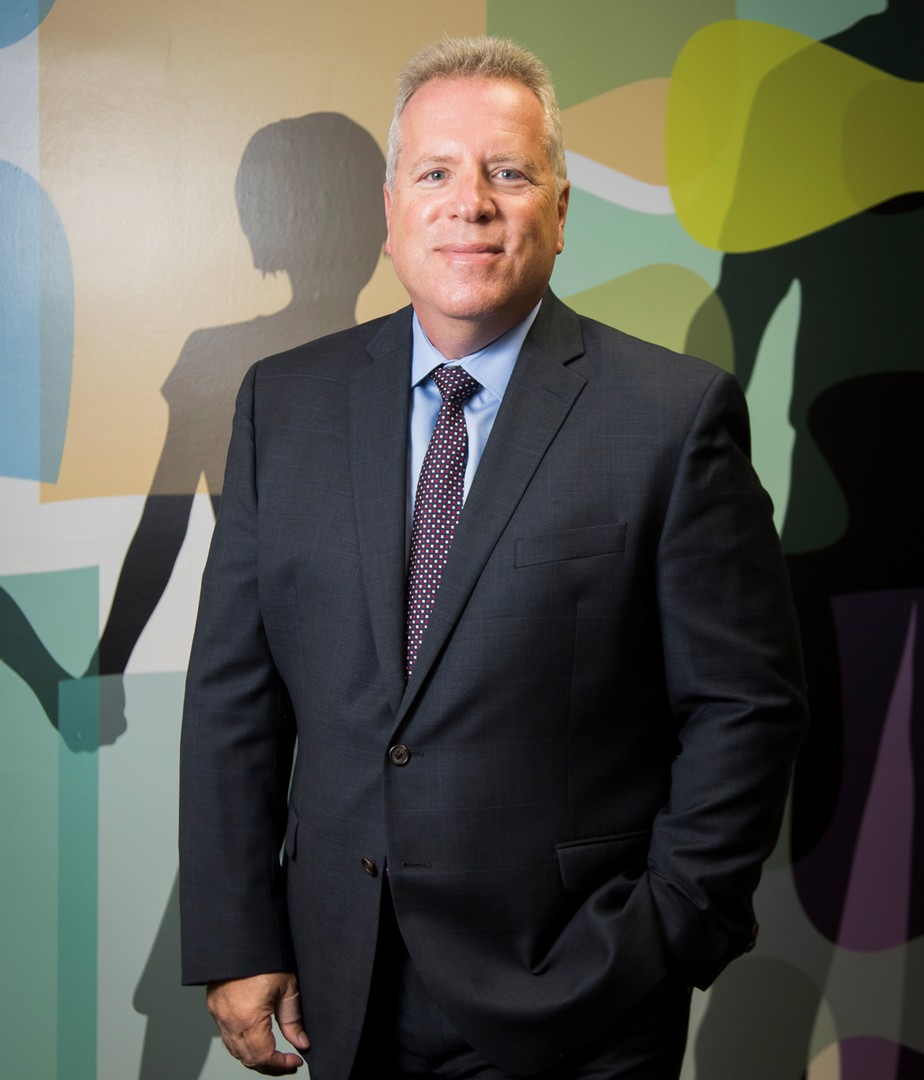 After 21 years as CEO at Henderson Behavioral Health, Steven Ronik knows all about the give and take that comes with providing care, housing, and crisis and recovery services for people with mental illnesses and substance abuse disorders.

Especially when it comes to funding.

When Henderson outbid 12 competitors for a multimillion-dollar state grant last year, it gave the largest behavioral health care system in South Florida an opportunity to launch a new program in Fort Lauderdale, one that provides local law enforcement with an option when dealing with people in the throes of a mental health crisis. Instead of putting that individual behind bars for a victimless offense—“A mental health condition is not a crime,” Ronik says—the officer can take that person to a centralized receiving facility for immediate evaluation, housing (up to 23 hours) and medication. The center has been busy every day since opening in April.

But before Henderson could celebrate its latest in a long line of cutting-edge achievements, the state legislature took nearly half of the funding away.

“It’s shocking,” Ronik says. “No one understands how that happened in the legislative session. So, for next year, our grant—initially a little more than $4 million a year for five years—will be cut by $1.7 million per year. It’s supposed to be cut another 14 percent after that.”

Unfortunately, when you oversee a health care system with 20 locations in South Florida, one that will provide 600,000 services and assist more than 30,000 individuals this year, there’s no time to dwell on the past.

Ronik shared some of Henderson’s successes and challenges with Lifestyle.

One in four Americans has a diagnosable mental health condition. Are we a nation in crisis when it comes to mental health—or just better at identifying such disorders?

The numbers, in terms of prevalence, have been relatively stable over the years. It’s just that access and care continue to get better. You also have more and more champions around mental health. Celebrities, for example, will self-disclose that they have mental health conditions. You want as much exposure as possible, and it’s now a big part of the American conversation.

In a mass shooting, yes, those are too often connected to someone with an untreated or undertreated condition—and that’s why access to mental health care is so important. You want to build systems of care that are easy to use and easy to access.

Over your two decades, what are the biggest advances that you’ve seen in behavioral health?

In the past five years, we’ve been involved in research called RAISE [Recovery After an Initial Schizophrenic Episode]. There were 35 sites around the country that looked at a package of care to deal with first-episode psychosis. The idea was that if you could get the right package of care after someone had their first psychotic episode, you could positively influence the trajectory of an illness like schizophrenia in a dramatic way.

Out of the RAISE research came a package of care called Navigate; we have a team trained in this. It’s a system of care that works with people after that first episode to stop the relapse cycle. Why is that important? Each time someone comes out of a schizophrenic episode, they tend to come out a little worse—psychiatrically and cognitively. If you can stop that cycle, you can change the trajectory.
There are two first-episode psychosis teams in Florida; Henderson is so proud to have one of them in Fort Lauderdale.

Are there issues you confront that haven’t improved over the years?

The main one is lack of support. Florida is just about the lowest per-capita spend on mental health services in the nation. We move between 49th and 50th in terms of spending.

It’s not just that the spending is low—it’s horrifically low. For example, we spend $39 per person on mental health services. The mean is more like $150.

Why? Priorities. Hopefully, there’s going to be more of a legislative commitment to directing revenue toward mental health.

How does that lack of funding translate in human terms?

Take Medicaid rates. Medicaid is a big payer for mental health services in Florida. We have two challenges relative to that. One, Florida is one of the states that did not expand Medicaid, which is troubling as a health care provider; with expansion, we could help thousands more people just here at Henderson. Also, the reimbursement rates for Medicaid services are very low; they typically cover only about 60 percent of the costs.

Combine the depressed rates and low per-capita funding, and you have a supply and demand issue. We have more people who demand mental health services than we can [treat].

At Henderson, we try and mitigate that through an Urgent Care mental health walk-in center that’s open until about 10 p.m., six days a week. We also have a mobile crisis team for children and adults that operates all year, 24/7, where teams of mental health professionals respond in 30 minutes or less to any kind of community mobile crisis call.

Does it go without saying that opioid addiction continues to be the biggest challenge for your team when it comes to substance abuse issues?

Florida had almost 4,000 [opioid-related] deaths in 2015; that accounts for about 12 percent of the 33,000 opioid deaths nationwide. [Editor’s note: According to the Centers for Disease Control and Prevention, opioid deaths have increased 200 percent since 2000.]

It accelerated, to a big degree, after the pill mills closed. People with opiate addictions were going to look for their drug one way or another. If they can’t get it from pills, they’re going to get it from heroin or synthetic opiates. Heroin is relatively cheap on the street right now; we’ve had hundreds of overdoses in Palm Beach County and Broward County.

The governor recently sanctioned it as a health care crisis in Florida, which is a good thing.

If some version of a repeal-and-replace health care bill eventually passes, what might that mean to Henderson?

Florida signed more people on the exchanges after the Affordable Care Act passed than any state in the country. When that happened, Henderson quickly moved to getting on most of the commercial insurance panels so we could help folks who suddenly had insurance.

That’s why we were so concerned about the Senate’s version of the American Health Care Act. We knew millions of Americans would have lost their health insurance, and it would have been a gutting of Medicaid.

For us, the big focus is Medicaid and this drumbeat to remove it as an entitlement program. In simple terms, that means that instead of entitlement funding, there would be block-grant funding to the states—and then the states would have to make up the cost difference. Most states are not going to make up that difference. Florida certainly is not going to be in a position to do so.

When you move from an entitlement program to block grants, you typically have to cut eligibility, benefits—or both—to make up the difference. One in five Americans is covered by Medicaid, so the move to eliminate it as an entitlement is very scary.

The current system isn’t perfect, of course. Deductibles and copays have been high on some of the plans. But it certainly has given people more access.