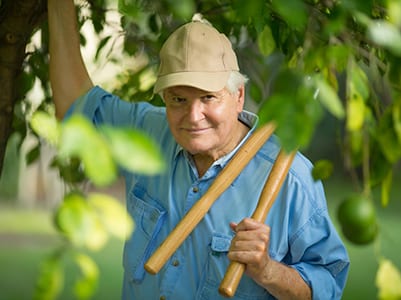 1 How did your journalism career get started?

It was in the Army. I was a young second lieutenant infantry officer in Germany and somehow wound up being assigned as a public affairs officer for a major command in Stuttgart that was of interest to American TV networks and publications. I had no experience or training as a journalist, but soon, I was escorting star reporters from ABC, CBS and NBC to various military operations in Europe, learning what they did and how they did it. I also began writing newspaper articles and had a radio show on American Forces Network. The network guys thought I had talent and encouraged me. When I was discharged, I returned to Miami (where, before enlisting in the Army, I was treasurer of a real estate investment firm), boldly walked into WTVJ Channel 4 News and asked for a job. On a “hunch,” the legendary Ralph Renick hired me as a correspondent. That was the start of my 40-year news career with WTVJ, NBC News and as a newspaper columnist.

2 You attended law school at the University of Chicago. Did you ever practice?

No. I only spent one year at the University of Chicago Law School, which had awarded me a full scholarship. I quickly learned that law was not for me and felt I’d be happier doing something else, though I had no clue what that might be.

3 Which of your news stories has had the most impact on South Florida?

There are several, but the most important was in 1998 when I discovered massive security problems and breaches at Miami International Airport (three years before the 9/11 attacks). With a hidden camera, dressed in normal civilian clothes, making no attempt to pretend I worked at the airport and with no airport ID, I walked unchallenged through unlocked doors onto the tarmac, boarded planes, entered “secure” baggage areas, smuggled fake bombs through passenger security checkpoints, etc. – all with the camera rolling. The reports were a sensation, which resulted in the dismissal of MIA’s security director as well as the expenditure of hundreds of thousands of dollars to improve airport security. I stressed in my reports that airports everywhere were wide open for terrorist attacks. Naysayers claimed such attacks could never occur in the United States…

4 Where was your favorite post as a foreign correspondent and why?

I’ve reported from more than 100 countries; for NBC News, I was based in Miami (as Latin/Central America correspondent), Rome, Moscow and Tel Aviv, the latter two as bureau chief. All were significant postings, but Israel was – and is – the most important, intriguing and exciting place for a journalist because of its strategic and vital location in the world’s most dangerous, unstable region and its close connection to the United States. Plus, I reveled in the Holy Land’s diverse cultures and incredible history.

5 Now that you’ve retired from the news business, you have a second career as an actor and model. What are some of your favorite moments from this part of your life?

When I retired in 2007, I had no plans. But Pinecrest resident Peter Miller, a nationally known professional fisherman, TV fishing show host and prominent model/actor, convinced me to “take advantage” of my TV background. So I did! I’ve appeared in many national commercials; been in countless magazine, newspaper and website advertisements all over the world; and acted in TV shows such as “Magic City” and “America’s Most Wanted.” My biggest thrill was playing opposite Robert Downey Jr. in a major international TV commercial and getting an email from him saying, “You were the best thing in the commercial.”

6 Tell us something that no one knows about you?

I am an open book. I have no secrets. I’ve told stories about me – good, bad, embarrassing – a zillion times to anyone who would listen. Is there something you’d like to know about me? Just ask.

7 What’s the best part of living in Pinecrest?