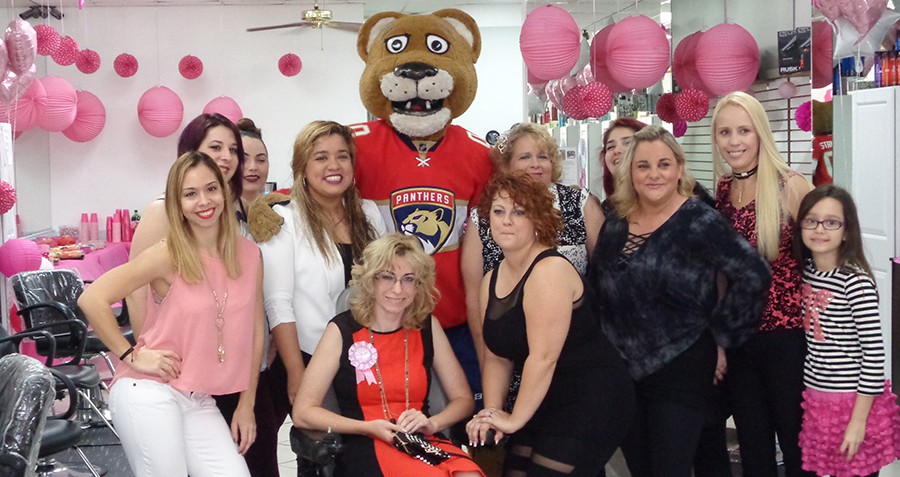 Almost every week, Rebecca Gastineau and her golden retriever, Quaker, would stop at Blast Salon on Lyons Road. When it was time to pay for her services, Quaker, holding a credit card between his teeth, would offer the payment to the salon’s owner, Kathie Tate.

The dog wasn’t performing a trick. It was part of his training as a service companion for Gastineau. Disabled after a stroke at age 17, the 27-year-old Township resident found Quaker through New Horizons Service Dogs, a Central Florida nonprofit organization that pairs trained dogs with those who need them.

Quaker, who had been with Gastineau for two years, later died after being diagnosed with canine cancer. While New Horizons would replace the 4-year-old dog, Gastineau still would have to pay for the costs of spending two weeks in Orange City, north of Orlando, to train with her new dog, Maui. It was an unexpected expense.

“Rebecca felt so secure when the dog was with her,” Tate says. “The dog gave her independence. I wanted to help her however I could.”

Tate decided the salon would host a fundraiser for Gastineau and Maui. On a Sunday in February, Tate opened the doors to Blast Salon to host a seven-hour cut-a-thon. For a donation to Gastineau’s cause, the salon stylists offered a free shampoo and haircut.

Tate also put together a silent auction that included a pair of Miami Heat tickets and designer purses (which she had in her closet and decided she could live without). They sold hot dogs and hamburgers and set up a candy bar (for “whatever anybody wanted to give”) with proceeds going to the fundraiser. The Florida Panthers’ mascot, Stanley C. Panther, and former NFL player Stockar McDougle, a Pompano Beach resident who spent one season with the Miami Dolphins, also made appearances.

Tate says Blast Salon performed about 40 haircuts that day, but “some people just came into the salon to donate money.”

“My staff worked on their day off,” Tate says, adding that any tips they received went to the fundraiser. “They wanted to do that.”

Gastineau attended the two-week training, and she says Maui is still learning. “The dog has to get familiar with their new owner’s voice,” Gastineau says. The golden retriever hasn’t mastered paying with a credit card yet, but she says he will.

“I was without a dog for a month and a half and it was more difficult,” she says. “It is definitely easier with Maui here.”