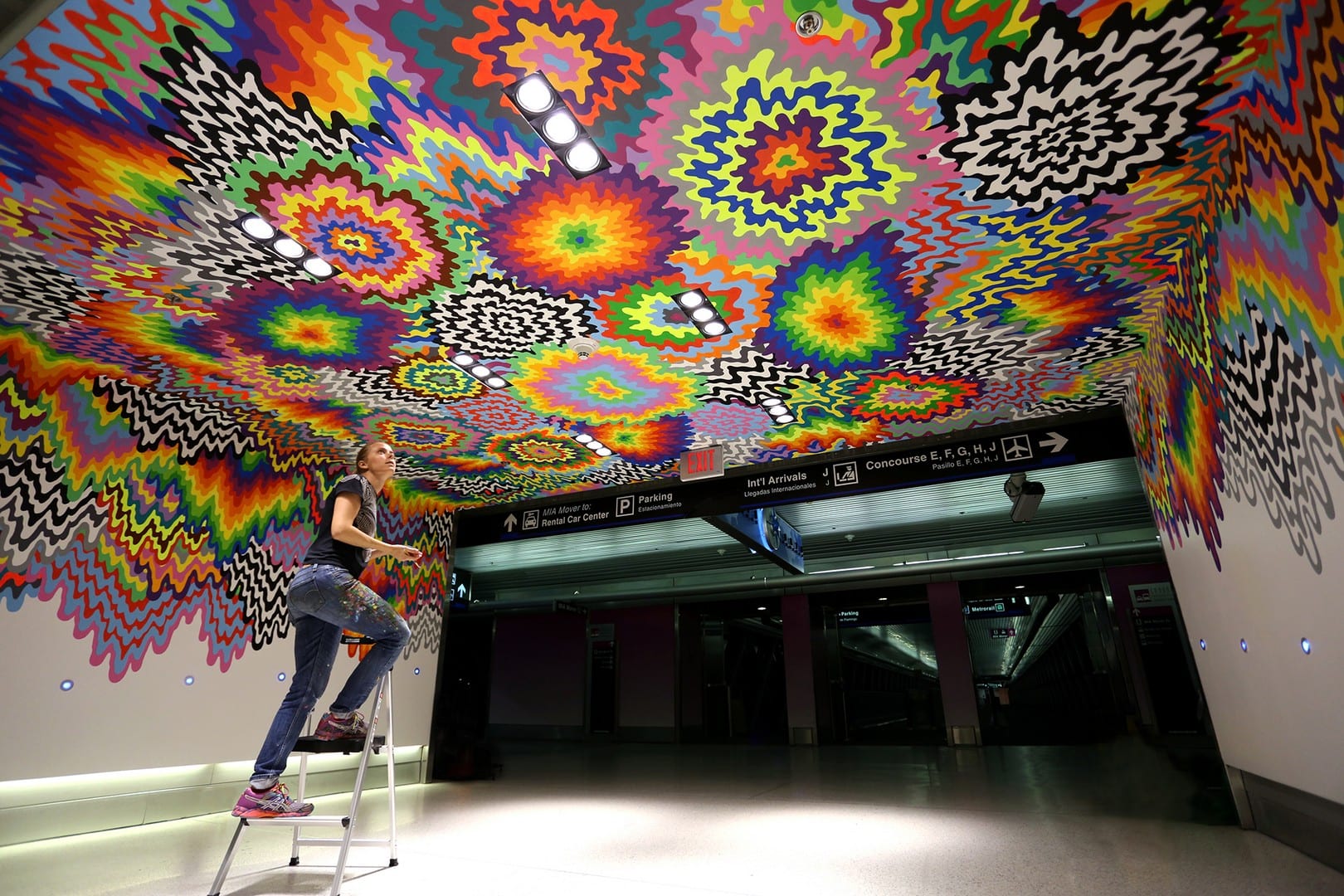 Psychedelic. Colorful. Trippy. Describe it however you want, Jen Stark?s art certainly turns heads. Earlier this year, the Miami native?s hypnotizing creations grabbed the attention of tongue-baring Miley Cyrus, leading to the biggest creation of Stark?s career yet: the rainbow wormhole tunnel that Cyrus slid through to make a dramatic entrance at this summer?s MTV Video Music Awards.

?It was surreal to see my work in front of millions of people and celebrities,? Starks says. ?I went to Miley?s after-party and got to hang with all of them. She was so ecstatic after the show.?

Stark credits another exciting project, a special artwork cover she did for Cosmopolitan magazine?s July ?Love Issue,? for initially getting her work noticed by Cyrus and MTV. But it was a chance invitation from the Flaming Lips? Wayne Coyne to Cyrus? home in Los Angeles (where Stark lives now) that helped seal the deal. ?Miley told me that she liked my artwork. She is really into color and psychedelia, so it was a perfect fit.?

A few days after Stark met Cyrus, the singer texted her a mock-up that MTV had done using her artwork for a billboard promoting the VMAs. ?It was this weird cosmic coincidence,? recalls Stark. ?It was strange that I had just met her and that MTV was pitching me to her as well.? While MTV wanted her to do promotional artwork for the show, it was Cyrus who catapulted it to another level. ?Miley was pushing for more of my art to be included in the actual show. She was the one who made that happen.?

Stark started painting watercolors as a child with her grandfather, who was a photographer and reporter for the Miami Herald and worked as an artist in his free time. She attended several art schools in Miami before earning her BFA at Maryland Institute College of Art in Baltimore, but Stark credits construction paper for her now-distinct colorful, two-dimensional style.

?I was studying abroad in the south of France in 2004, and I was a college student on a budget,? Stark says. ?I needed to get art supplies that were affordable, so I decided to get a cheap stack of construction paper. I brought it back to the studio and started experimenting, and it?s grown from there.?

Stark says the defining moment of her career came in 2011, when she was asked to do a mural for NSU Art Museum Fort Lauderdale. She painted a dripping rainbow of colors down the side of the museum. ?I titled it ?Acid Free,? playing off a psychedelia theme and making a joke about the art world, which is always very concerned about making sure materials are acid-free so they are not ruined 30 years later,? Stark says. ?Painting the museum gave me much more of presence. It?s become a landmark in Fort Lauderdale.?

Last December, Stark finished a permanent installation called ?Meltdown? on the third floor of Miami International Airport between Terminals D and E. Since this is a busy part of the airport, Stark and her team had to work seven days straight from 10 p.m. until 4 a.m. to complete the mural. Stark says it?s one of her most meaningful pieces because of her strong family ties to the site. ?Both my grandparents and great-grandparents owned a dairy farm in the late 1940s on the site which is now Miami International Airport. They were sort of pioneers taking over the land. Now, 75 years later, my mural is kind of bringing that full-circle.?

While the 32-year-old moved to Los Angeles three years ago to pursue bigger opportunities, Stark?s mother still lives in the same house off of Bird and Ludlam roads where she grew up. Stark will return to Miami for Art Basel, where she?ll be part of a group booth at the ?Untitled? satellite art fair. In early March, Stark has a solo show at Eric Firestone Gallery in New York?s NoHo neighborhood, where famous artists like Andy Warhol worked in the ?60s and ?70s.

?I was in New York last week, and I stayed at the gallery because there is a little apartment in the back,? Stark says. ?There are photos of Basquiat and Haring hanging in the gallery apartment, and it’s so crazy to be on the same street that they lived and died, and to feel the energy from their ghosts. It’s amazing to think of all the artwork they created and how many people they touched. Now in my own way I’m carrying on their legacy and continuing to spread art.?

As for her new bond with Cyrus, Stark says, ?She just texted me a few days and told me ?I have an idea for a new project!? So there are going to be things brewing.? ###