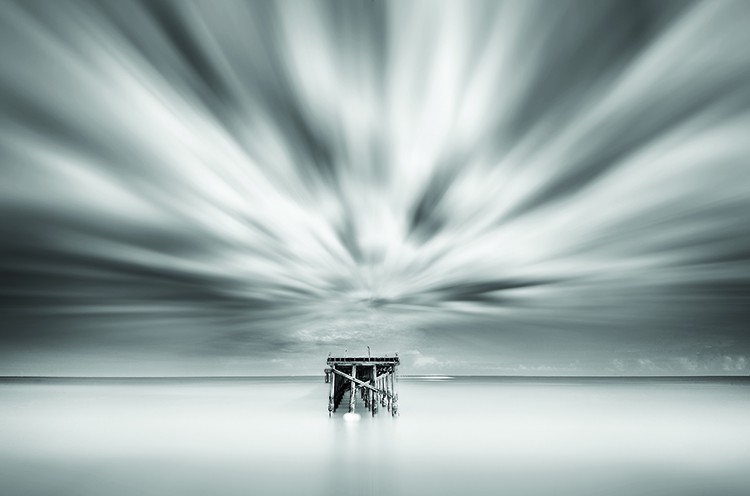 When Sandra Canning goes too long without taking photographs, she doesn’t feel like herself. If she isn’t exploring her ideas through the camera lens, she grows miserable—even though doing so sometimes hurts just as much as keeping it inside.

“So much of my creative process is inquiry—myself and my subject—but so many people don’t do that. They want it to be easy,” Canning says. “Sometimes, creating is painful and it should be.”

Canning turned to photography, in part, to diffuse some pain of her own. When she moved to South Florida from Los Angeles about 14 years ago, she struggled to adjust to her new surroundings.

“I was going through a rough patch,” Canning says. “Part of it was just adjusting to Florida because I was leaving a life of world travel and all the glitz. … It was so different from what I was used to.”

The “glitz” was the modeling life that Canning says found her by accident at her home of St. Thomas in the U.S. Virgin Islands. When she was walking home from school, French photographer Guy Bourdin noticed her, and she landed her first modeling job for the French edition of Vogue. After graduating from high school, she decided to continue modeling in Los Angeles and started acting as well. She had a role in “Days of Our Lives” and appeared in the films “Dragnet” and “Marked for Death.” She also played featured roles in music videos for Jeffrey Osborne’s “You Should Be Mine (The Woo Woo Song)” and Gregory Abbott’s “Shake You Down.”

“I never really put the time or energy into exploring other talents and abilities,” Canning says, “so I probably did that way longer than I should have.”

After a few years, Canning’s career wasn’t satisfying her, so she attended Santa Monica College in California, discovered a knack for sales (she works as a real estate agent) and moved to Coconut Creek to be close to her mother, a Coral Springs resident.

To help her through her conflicting feelings about leaving Los Angeles, Canning started taking photos on her iPhone. Her friends and family took notice of her natural talent and urged her to invest in becoming a professional. One friend told her, “People would die to do what you can do.”

“I spent so many years in front of the camera that it never occurred to me to go behind the camera,” Canning says with a laugh. “But I worked with some of the best photographers in world [as a model]; I really do think some of that could have rubbed off on me.”

“My goal is to make the viewer think, feel, get involved with the picture,” she says. “When it’s black and white, you reduce the subject to its purest forms—the shapes, the lines, the shadows—and then the viewer begins to put the color in their own imaginations.”

“I’ll explore color because there’s some emotion I’m trying to convey more effectively,” she says. “Getting Facebook and Instagram likes—although they’re nice—will never be the motivator for why I’m creating something.”

That said, she’s not a purist when it comes to creative exploration. Using software that puts her photos on clothing, Canning sells leggings and other pieces that feature her photographs, with plans to launch a full clothing line. Canning also has created 3-D printed lithophanes using 3-D printing and 3-D scanning, technologies she considers “the future.”

“Photography’s changing. It’s a lot more technology-driven than talent-driven than it ever has been,” Canning says. “It’s important for creative people to embrace any and all forms of expression, so that is probably the direction I see my work going.”

In all her work, Canning seeks not to document but to make the viewer feel. To accomplish this, she uses long-exposure techniques, using a tight aperture and a dark lens filter to slowly capture the light, giving her photos a meditative and ethereal quality.

Once, when a woman bought one of Canning’s photos, she started crying and told Canning that the photo helped her connect to feelings she had forgotten.

“I started crying, too,” Canning says, tearing up at the memory. “I’d rather you pay me in tears than money any day if a picture can help you to connect with something important. As creative people—whether you’re a writer or a photographer or an artist—we have a duty to serve the people who receive our work.”

As part of her Neighborhood Beautification Project, Canning donates art to nonprofit organizations that don’t have the funds to buy art for their offices the way for-profit corporations do.

“It’s not fair that because you’re a nonprofit or you don’t have a huge budget that you can’t have great art,” Canning says. “When you go to nonprofits, you’ll see they don’t have art on the walls; they barely have enough money to pay the bills.”

To learn more about the project and to view more of Canning’s art, visit sandracanning.com.

Get Ready for ArtsFest

ArtsFest, Coconut Creek’s art extravaganza, returns with a family-fun day of art, entertainment and more. Creek artists will display their work, including Canning, coffee watercolor artist Steven Mikel and Marvin Keith, who works with acrylic and oil. Others include Glenda Ramos, a Brazilian artist from North Miami Beach.

The free event supports the Coconut Creek Multicultural Circle’s funds toward college scholarships for students in Coconut Creek schools and local organizations such as the Police Explorers. The organization will sell raffle tickets and other goods at ArtsFest. A nonprofit organization founded in 2009 by Commissioner Mikkie Belvedere, the Multicultural Circle unites the community by sharing ideas and appreciating and celebrating the community’s cultures and customs. Meetings are held the first Tuesday of each month at the Community Center.