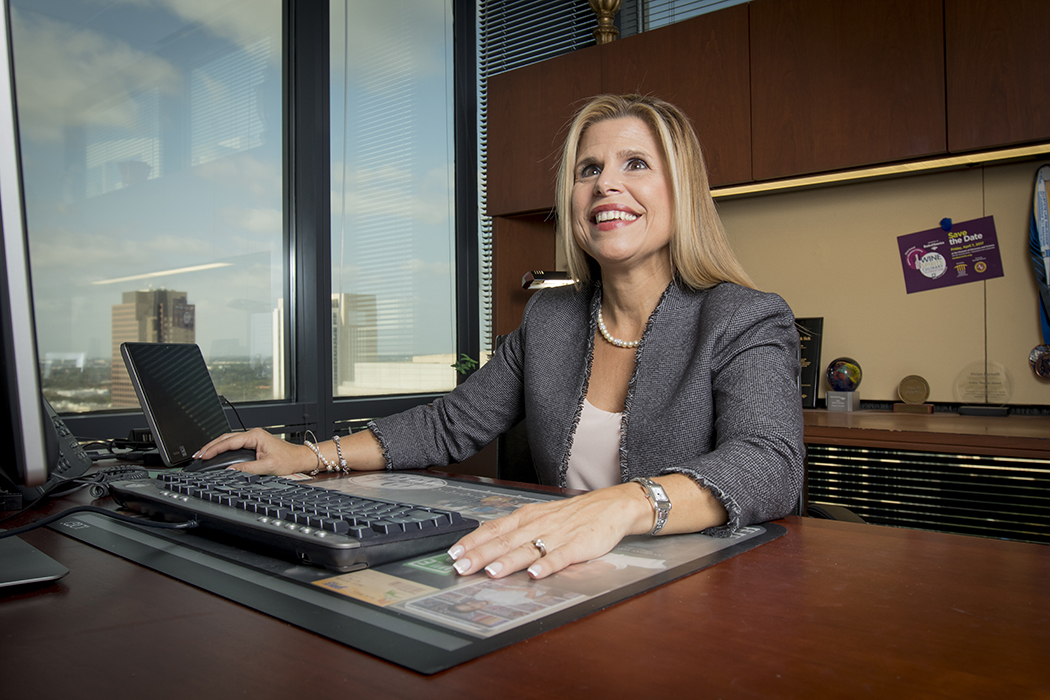 When Vivian Porcelli has issues at work, or when her 12-year-old son Anthony tells her of a difficulty at school, Porcelli asks herself, “What would Shihan say?”

“Shihan” is a Japanese word that roughly means “master instructor.” In this case, Shihan is Vivian and Anthony’s master karate instructor, Frank Scaccia, a sixth-degree black belt and owner of Team Creek Martial Arts and Fitness Academy in Coconut Creek. Most likely, Shihan would remind her of Team Creek’s creed, something she says has become ingrained in her.

“Modesty, courage and integrity,” Porcelli says. “Once you’ve said these principles three times a week for 15 years, it seeps into your everyday fabric.”

The regional senior vice president and small-business banking manager for Bank of America, and a Coconut Creek resident, earned her second-degree black belt, and will start training in January for a third degree, which she expects to wrap around her waist in November 2018. When asked if the training is taxing, she says martial arts is something she now can’t live without.

“Even if my day is so busy and then I’m stuck in traffic, I will get through it to get here,” she says. “It’s more than just the physical [workout]—I can go to a gym to workout. What I get here is positive messaging.”

DOING IT HER WAY

She recites another phrase culled from karate: “The goals we set are the goals we get.”

Porcelli didn’t set her sights on becoming the oldest female member of Team Creek, or that by the time she was 51 she’d be a second-degree black belt. “It sometimes makes me uncomfortable that I can’t do what these kids are doing. I’ve become OK with the fact that I am going to do it my way. I say to Shihan, ‘What’s the senior version of that flying sidekick?’ We joke about it.”

When her oldest son, Joey, now 22, was 7 years old, a colleague at the bank suggested Porcelli get her young boys involved in martial arts. “She had her black belt and mentioned that they had a kids program. She was telling me everything that it teaches kids, that it was the best thing for them because of its character building, how it helps them to set goals, builds confidence and instills in them a sense of being nice to people. She told me that I should check it out, and I did.”

She enrolled her son, Vinnie, then 5, too. For many years, Porcelli says she was a bystander—a karate mom. Joey stuck with martial arts until he was 18, but Vinnie took a break soon after he joined. “When he was 12 or 13, he came to me and said he wanted to go back,” she recalls.

Porcelli decided to give it a try, too. While her husband, Joe, a financial adviser, was supportive of the karate kids and their mom, he didn’t have a personal interest, so it created a special bond for Porcelli and her sons.

“We’d train together and we would talk about it,” she says.

Now that the older boys have moved on from karate, she and her youngest son, Anthony, a sixth-grader at Mary Help of Christians Catholic School in Parkland, share the love of martial arts. “When Anthony went through his training, I actually knew everything and I could help him,” she recalls. “We would practice at night together.” Today, Anthony is a first-degree black belt.

She started weight training when her oldest son, Joey, began his interest in weights. “I can only get to [weight training] twice a week,” she says. Porcelli is also gearing up to run a 5K race with her middle son, 20-year-old Vinnie. “I’ve run a 5K with Joey and Anthony, but never Vinnie.”

The coaching she uses to motivate her Bank of America team, she says, comes directly from her own experiences—and many of them from her martial arts training.

Weekly wisdoms from classes at Team Creek are used on agendas she shares at the staff’s weekly meetings. “If I can apply it to my work, I take a picture of it with my phone to talk to my team about it.”

“Get comfortable with being uncomfortable,” reads one. “The power of repetition” is another. And then there’s one of Porcelli’s personal favorites—“T.I.A.,” an abbreviation for “Truth in Advance.”

The company recognized these coaching skills when it appointed her to Vital Voices, a volunteer American Global Ambassadors program. Porcelli was partnered with Velma Saric, who founded the Post-Conflict Research Center, a nonprofit, peace-building organization in Sarajevo, in Bosnia and Herzegovina. Despite the distance, the two would speak on the phone. She inspired Velma to create an international advisory board, with which Porcelli has become involved.

She also is active in the auxiliary board at the Fort Lauderdale Museum of Science and Discovery, and MetroBroward, the only community development financial institution in Broward County.

The self-proclaimed goal setter recalls a story about part of black-belt training. “There are people around you in a circle and you have to be prepared because you don’t know what they are going to do when they come at you,” she says. “You have to get to a point that the minute they touch you that you know what you are going to do.”

Porcelli likes the feeling of being curiously prepared. “What’s the end result?” she constantly asks herself, her banking team and her family. At the end of her day, she realizes her professional and personal life share the same fundamentals.

“It’s really about understanding what makes people tick,” she says.