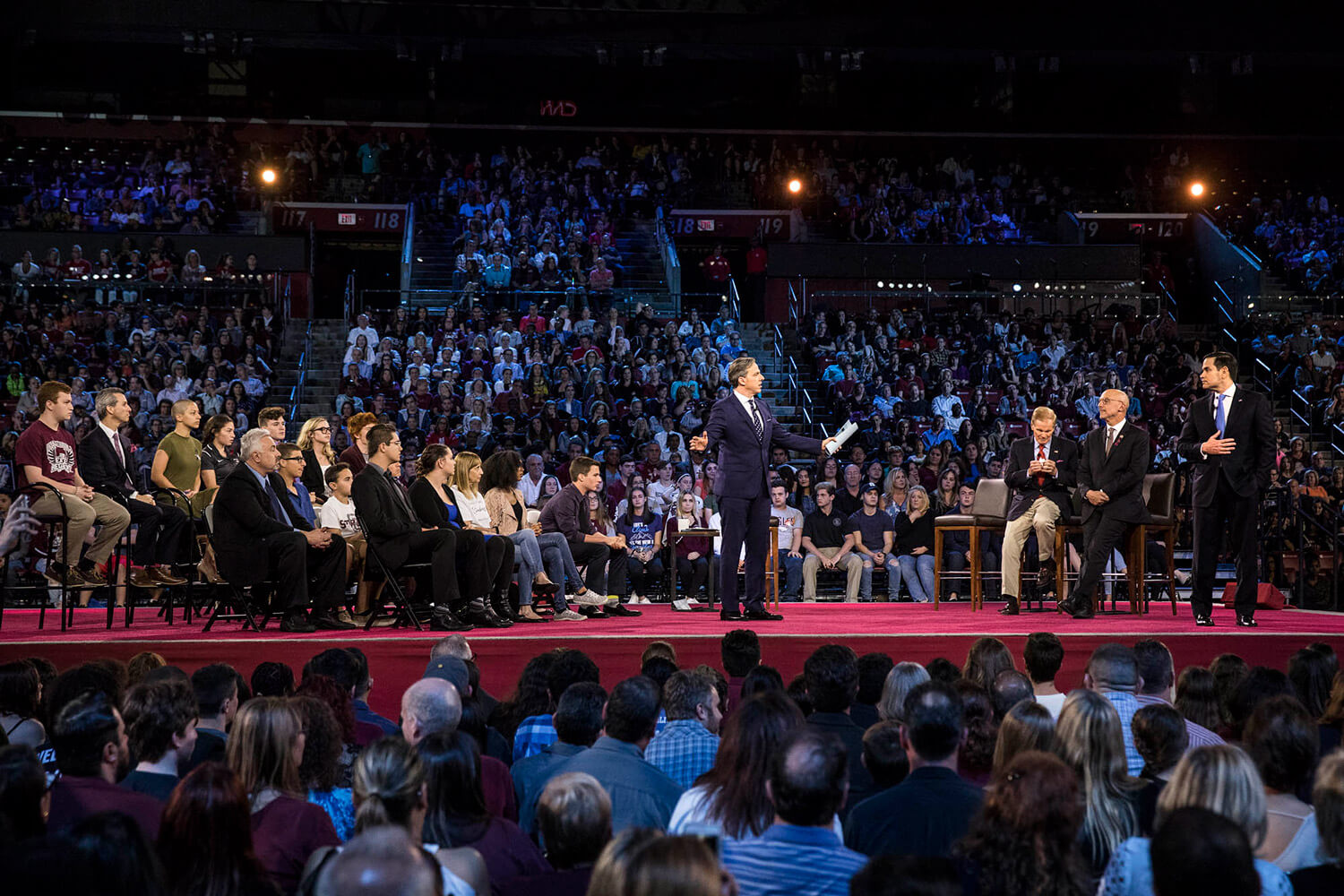 It had been exactly one week since a gunman had shot and killed 17 students and teachers (and wounded 17 others) at Marjory Stoneman Douglas High School. But this wasn’t the night to grieve.
This was the night to vent.

The survivors and parents who took the stage at BB&T Center in Sunrise—as well as the thousands of residents, Parkland supporters and MSD faithful who filled the arena for CNN’s special town hall—were there to hold their representatives, on both sides of the aisle, accountable. And, later, to ask pointed questions of Dana Loesch, spokesperson for the National Rifle Association.

It made for captivating television. The two-hour live broadcast drew 2.91 million TV viewers and another 1.9 million visits to various online platforms, a CNN record for digital viewings of a town hall format.

But, at times, what the cameras didn’t capture proved equally compelling.

Earlier in the evening—on the heels of an emotional video featuring clips of MSD graduates from all over the country offering their support—Broward County Sheriff Scott Israel fired up the crowd with comments that included a call to ban assault weapons. He closed with a surprisingly candid admission about changes in gun legislation. “My generation, we didn’t get it done,” Israel said. “You will get it done.”

The anger and frustration expressed by so many students, teachers and parents during the broadcast was echoed off camera, as well. Minutes before host Jake Tapper welcomed the live audience, student activist Cameron Kasky cracked wise from his seat on the main stage about the absence of Florida Gov. Rick Scott and President Donald Trump, neither of whom accepted CNN’s invitation to join the discussion, either in person or via satellite.

As Marco Rubio took his seat prior to the start of the town hall, a woman eight rows from the stage shouted, “Shame, shame, shame!” She would repeat that mantra several more times. During a commercial break, a man yelled, “Give the money back, Marco!” at the Republican senator from Florida, a reference to the more than $3 million that the NRA has contributed to Rubio during his political career.

It came as no surprise to observers that Rubio—who took the stage with fellow U.S. Sen. Bill Nelson and Rep. Ted Deutch, both Democrats from Florida—and Loesch, who was paired with Israel, participated in some of the evening’s most heated exchanges.

From left: Max Schachter, father of 14-year-old Alex (who died in the shooting), and MSD senior Emma González react to comments during the town hall.

Kasky stood directly in front of Rubio and asked several times, “Can you tell me right now that you will not accept a single donation from the NRA in the future?” Rubio avoided a direct answer, instead noting that “people buy into my agenda, and I do support the Second Amendment.”

Fred Guttenberg, father of one of the student victims, 14-year-old Jaime, told Rubio that he wanted to like him. He also wanted him to acknowledge that guns were the factor in “the hunting of our kids.”
Rubio said he supported banning bump stocks and changing the background check system, but he “did not believe an assault weapons ban would prevent the Parkland shooting from happening.”
“Sen. Rubio, my daughter … was shot in the back with an assault weapon,” Guttenberg said. “The weapon of choice. It’s too easy to get; it is a weapon of war.

“The fact that you can’t stand with everybody in this building and say that? I’m sorry.”

Before senior Emma González pressed the NRA’s Loesch on the school shooter’s ability to purchase a semiautomatic weapon with such ease, she told her, “I want you to know that we’ll support your two children in a way that you will not.”

“This individual was nuts,” Loesch said, referring to the confessed shooter in response to a González question. “Neither I nor the millions of people that I represent as part of [the NRA] support people who are crazy, who are a danger to others, getting their hands on a firearm. … I’m not just fighting for my kids, I’m fighting for all of you. I don’t want anyone to ever be in this position again.”

Loesch had a different take on her town hall experience the next day at the Conservative Political Action Conference in Maryland. She told a far-more receptive audience that people at BB&T Center were “rushing the stage and screaming, ‘Burn her!’ ” She also insisted that “many in the legacy media love mass shootings” and that “crying white mothers are ratings gold.”