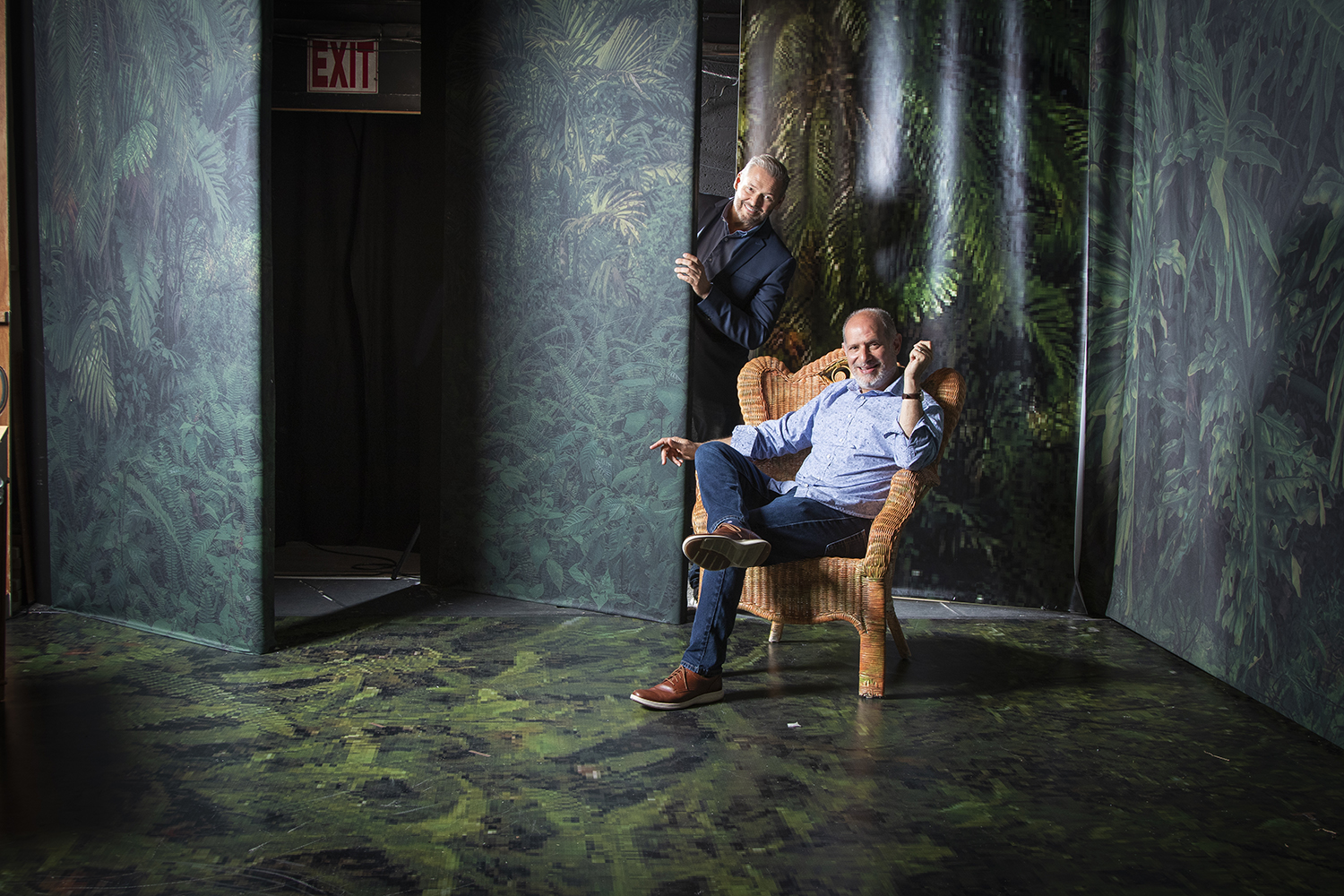 Island City Stage, celebrating 10 years of award-winning theater that resonate with the gay community, looks to the future

It has been nearly a full decade since Island City Stage debuted with The Twentieth Century Way, on Aug. 9, 2012. Back then, the company was created to focus on works by, about and for the LGBT+ community that didn’t have its own space. Island City partnered with Empire Stage, co-producing its first show in that company’s theater on North Flagler Drive in Fort Lauderdale.

It didn’t take long for founder and artistic director Andy Rogow’s passion project to gather steam. A year later, Island City Stage took home six Carbonell Awards (South Florida’s version of the Tony’s) for its production of The Timekeepers, further establishing it as an important presence in local cultural circles. By 2015, the theater had its own home in Wilton Manors and more Carbonell honors. Today, as part of its 10th anniversary season, Island City Stage holds “Behind the Red Curtain” forums, allowing the public to explore issues addressed by each play.

“No theater company [in 2012] was doing gay plays consistently,” Rogow recalls. “[Island City Stage] came from community members who wanted to see a reflection of themselves on stage” and not just in New York but where they lived in South Florida.

But after 10 years of growth and acceptance for the theater—and significant victories for the gay community, like the legalization of same-sex marriage across the United States in 2015—Rogow wonders what the future holds in light of the anti-LGBT+ sentiment reflected in many conservative political agendas. He mentions the Parental Rights in Education bill recently signed into law here in Florida, legislation also being considered in other states that critics have dubbed “Don’t Say Gay.”

“A few years ago, I thought we were headed toward more family plays, more plays about gay people having kids,” Rogow says. “Now, I think we’re heading back to figuring out how gay people fit into American society.”

Rogow adds that it will be interesting to see what “stories” will emerge from gay playwrights in the wake of current rhetoric.

Rest assured that Island City Stage will be looking for those stories.

To open its 2021-22 anniversary season back in October, Island City Stage brought back The Twentieth Century Way, a play by Tom Jacobson about two actors hired in 1914 to entrap homosexuals for social vagrancy in the public restrooms of Southern California. The company’s associate artistic director Michael Leeds directed the original production and the revival. “It was the play that put us on the map,” Rogow says.

It also underscored the company’s mission to create theatrical experiences focused on the LGBT+ community—but for a universal audience.

“The plays we stage have very little to do with the act of sex, so they are much more about universal themes that happen to feature gay characters,” Rogow says. “I like to find plays about what’s happening today, current events and current issues.” 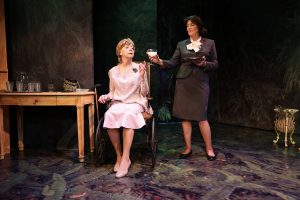 Rogow decided from the beginning that Island City Stage also would bring new works to its audience. “I had a commitment to do new plays; things that had just been published or had just been in New York.”

And he wanted his company to produce these new works wholly. “It’s about working with a playwright directly, to have a say in how the play gets shaped, to be able to be the one that’s the first to put it on its feet.”

One of those new plays by prolific South Florida playwright Michael McKeever, Daniel’s Husband, had its premiere in June 2015 as part of Island City Stage’s third season at Empire Stage. The show went on to capture Carbonell Awards for Best Production of a Play, Best Actor and Best New Play.

Daniel’s Husband went on to a New York premiere at the Cherry Lane Theater where it ran in 2017 before moving to the Westside Theatre for an off-Broadway run until December 2018. “We were listed in the programs for both New York productions that Island City Stage originated the play,” Rogow says.

Before its Big Apple splash, the success of Daniel’s Husband had ripple effects of a different kind on Island City Stage.

“It was a complete sellout. We had grown tremendously fast”—too big, Rogow says, for Empire Stage’s 50-seat theater. Fellow theater founder Erynn Dalton had just signed a lease for a space to accommodate her Fort Lauderdale immersive horror theater company, Infinite Abyss. It was inside a former drapery cleaning service building on North Dixie Highway in Wilton Manors.

In 2015, Island City Stage joined Dalton in leasing the building. By doing that, the company increased its seating capacity by 25 percent. “She had found movie theater seats that she got for a buck a piece from a cinema that had closed,” Rogow recalls.

Infinite Abyss now has its own 55-seat, black-box theater next door to Island City Stage, which is called The Foundry (where Dalton’s theater company still performs and LGBT playwright and director Ronnie Larsen produces a slate of gay-themed live plays and shows).

As Island City Stage continued to grow, so did the workload. Rogow says he was doing everything from running the box office to handling public relations and marketing.

Rogow, who has a master’s degree in acting from the University of Nevada at Las Vegas, was working his mortgage brokering business at the same time. It’s a skill he picked up while serving as artistic director (1997 to 2002) at the Hollywood Playhouse. While he says most of his time is now spent running Island City Stage, he still dabbles in brokerage.

“I told the [Island City] board that if we were going to continue to grow, we had to get someone to run the business and start bringing in money,” says Rogow, who grew up in a northern suburb of Chicago.

They agreed and they put out a national search for a managing director. 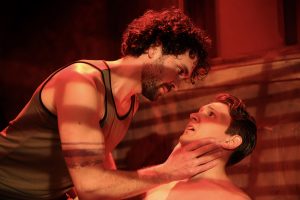 The company was rehearsing its first show in its new space. It was a play titled Angry Fags, which Rogow directed and which the playwright Topher Payne describes as a “a dark and dystopian revenge tragedy in two acts that pushes every button.”

Martin Childers, who had been working for 15 years as executive director at one of Kentucky’s longest-running professional theaters, applied for the job. “I was thinking I needed to do something different,” he says. About two days after Childers applied, he was invited to visit the theater where they were rehearsing.

“The play was controversial, but I loved watching their rehearsal process,” Childers says. “I met the board, and I was made an offer.” He joined Island City stage on Jan. 4, 2016, becoming the company’s managing director.

Childers focused on getting more donors and grants. He updated the box office system and got the company’s financial affairs in order. Even though the building is leased to the theater company, Childers says there were some things that had to be done to the space, so upgrades were made in 2017.

“We added all new seating, and everyone sponsored a seat,” he says. Patrons paid $600 each to have their name affixed to one of the 69 chairs. Childers says they sold quickly.

Island City also has remodeled the dressing room area, fixed up the courtyard in the back of the space, replaced the air-conditioning system and made the theater more accessible for guests with disabilities that require a wheelchair.

With its three-year renewing lease up in September, questions loom.

“We’ve invested a lot in here, so we aren’t going to jump,” Childers says of upgrades to the tune of between $150,000 and $200,000 during the past five years. “We’ve done so much to make this building better, but we still don’t own it. Someday, someone could tell us that they are selling the building for development, and we could be … well.”

So, as part of strategic planning, there are ongoing conversations about Island City Stage having its own space. “It brings you total control of what you can do with your presentation, but we can’t do anything unless we ask our audience if they are willing to go along with that,” Childers says. “Are they open to following us somewhere like Oakland Park, that wouldn’t be smack in the middle of Wilton Manors?”

The company also says it’s at a crossroads when it comes to attracting new audiences. “With our board of directors, we are redefining what our mission is and how to expand it a little to include more allies. Finding plays that have interest to LGBT+ but also to non-gay people,” according to Rogow.

Childers says the typical Island City Stage audience member is a 60- to 65-year-old gay white male. “That is 75 percent of who’s attending our shows, but we want to see a mix of people,” he says.

Island City Stage recently started women’s nights at the theater, and it plans to have other shows in the space on “dark nights” when a play isn’t in performance. “We’ll be making the space available to artists for free to do whatever they want to do,” Rogow says. “It’s part of a whole diversity program. You can’t have diversity if people don’t even know you exist.”

While Rogow and Childers want Island City Stage to remain a place that is reflective of South Florida’s gay community, they don’t want the theater to be viewed as exclusionary.

“If we want to expand our audience, and we do, you have to do things to open that door, to let people see that you are open to everyone,” Childers says.

“It takes a little while to get there, but we’re doing it.” 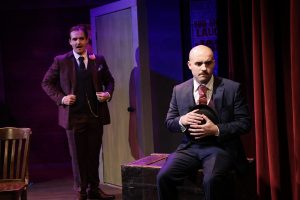 Island City Stage presents The Mystery of Irma Vep through July 10, by Charles Ludlam, a legend in LGBT+ theater, elevating camp to an art form and paving the way for companies like Island City Stage to exist.The theater company closes its season with One in Two (Aug. 4 to Sept. 4) in what’s described as an unforgiving story of a Black man diagnosed with HIV. For more information, visit islandcitystage.org or call 954.928.9800.