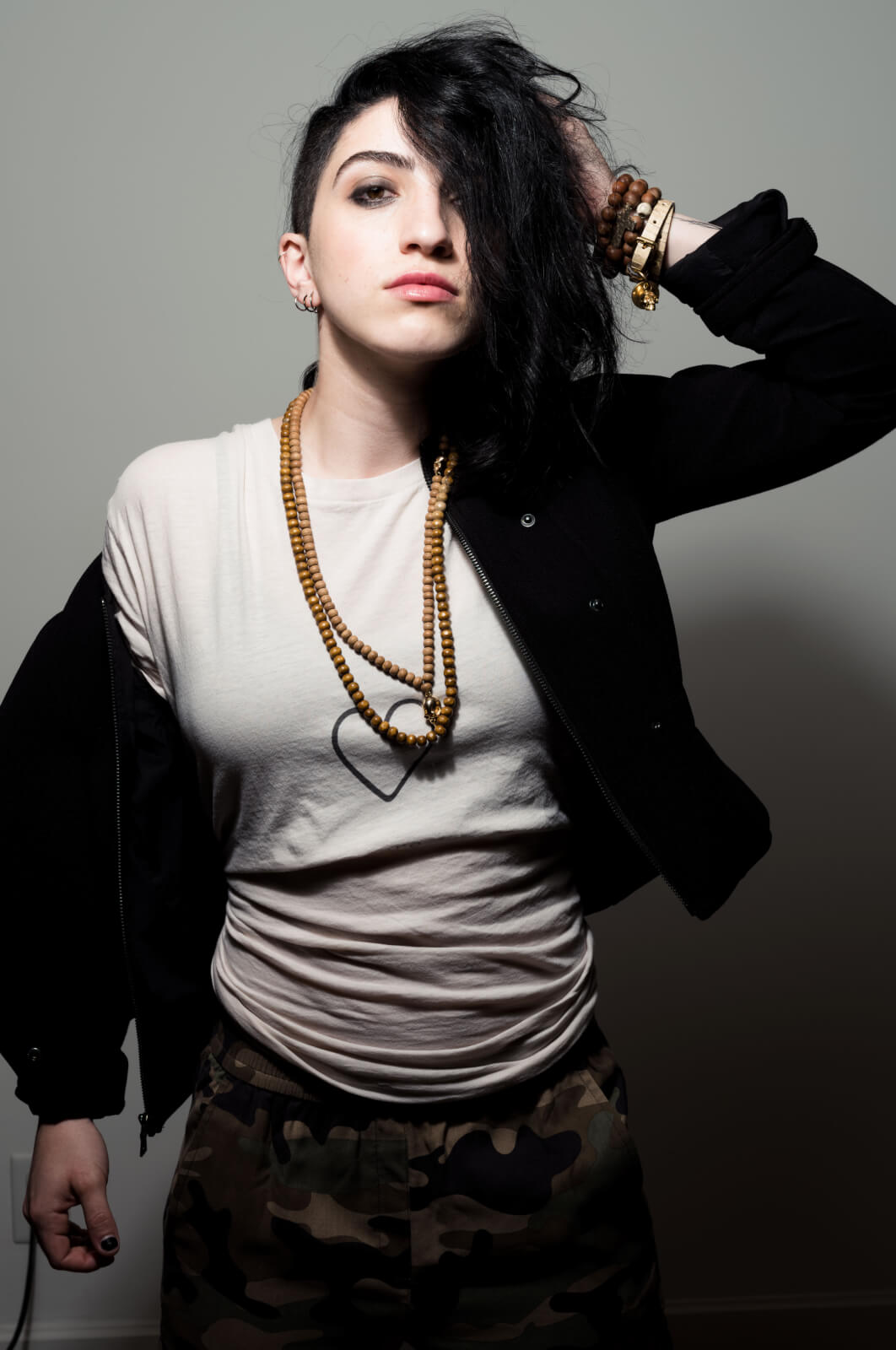 Doing It Her Way

Emily Estefan saunters in to an office inside a deep-blue building on the corner of Jefferson Avenue in Miami Beach, clearly comfortable in her own skin. The building houses Estefan Enterprises, the hub for parents Gloria and Emilio’s multimedia company. Awards, letters of commendation to the Gloria Estefan charitable foundation, and tributes to the couple line the walls. It’s a timeline, of sorts, for this royal music family, and Emily is a big part of it.

At 22, she has the looks and, she says, the traits of both parents. There’s no doubt, Emily quips, that she’s their “kid.”

Her conversation recalls the friendliness and approachability of her mother, the seven-time Grammy Award winner. She also reveals a business side that speaks to her father, Emilio, a music producer and songwriter, who met the former Gloria Fajardo in the 1970s and recruited her to join his band. They became Miami Sound Machine, the couple got married, and Gloria became the most successful Latin crossover performer in the history of pop music.

However, Emily is forging her own musical path. With a last name that she acknowledges opens doors but does “present obstacles, too,” she’s been performing at jazz festivals around the country, playing cuts from her debut album, “Take Whatever You Want.” It’s a collection of 13 songs, written and produced while she was a sophomore at Boston’s Berklee College of Music.

When it was done, professionals at her parents’ Crescent Moon Studios mixed and mastered the record, “then it sat on a shelf for 2½ years” until she finished school.

While the album is a huge accomplishment, there’s more to it, Emily confides. “This is where I literally found my voice,” she says.

Until she was 18, the daughter of one of the world’s most famous singers “had a fear inside of me. It was asphyxiating me,” she says. Emily never wanted to sing. She played drums and guitar, but singing was out of the question. “I wouldn’t even sing to myself. It was such a huge measuring stick. I was deathly shy because I was afraid I would sound exactly like her.

“You know, it’s tough your whole life to have people meet you and say, ‘Sing, sing, sing.’ ”

After leaving Miami and living on her own in Boston, she decided to face her fears. She would sing for her mother the next time they were together at their vacation home in Vero Beach. “It was 2 a.m., and I told her, ‘You can’t cry, you can’t look at me.’ ” She sang an Esperanza Spalding song, another “old soul,” a bassist and singer who has introduced jazz to a younger audience and who has a sound similar to Emily’s.

Gloria did cry and did look at Emily, by the way. But the breakout moment with her mother set her free. “I realized I had this tool!” she says. “And then there were words, finally words. It felt like being born and taking a first breath.”

She wrote every day after that. She’d send the compositions to her mother and father to listen to, and excitedly say, “Check this out.”

She recorded the entire album over the course of a month-and-a-half in her apartment, where she wrote, sang and played every instrument, except horns, which were added later. “When I listen to it now, I can feel this energy that I don’t think I could re-create.” She considered redoing the album at her parents’ professional studio in Miami, but “it didn’t feel the same when I tried to re-sing it.”

Her biggest fans are her parents. They have been in the audience, “front and center,” for every one of her shows, as long as she can remember.

“When I perform, my mother sits in the front row and, when things are going well, she’ll put her hand out, palm facing up, and draw a circle with her other finger,” Emily says. “It means, ‘You have them.’ Sometimes, it has nothing to do with the music, it’s about making the audience feel something.”

Emily has been musically inclined all along. She says it was in her DNA. She began playing drums as a child, creating her own percussion kit when she was 8.

“I would get buckets, pots and pans, and I’d turn a punching bag upside down and I would build this percussion area. I would do this at the house, and then we’d take off on a four-month leg of a tour with my mom. I would sit on the side of the stage, and I would play bongos. I had this view of everything,” she recalls, thinking of the sea of people who would come to stadiums to see Miami Sound Machine.

Emily says she would be mesmerized by how “everything just came together. The horns, the percussion, the other instruments, everything would just become part of the next.”

Her album is uniquely hers, and part of the vibe is that, although in her early 20s, she’s drawn to a different era of music, where, she says the “intimacy of everything that makes up the song is apparent.”

It’s hard to put a finger on the genre with which she most identifies, and she acknowledges she is difficult to categorize. There are shades of legendary torch singers such as Billie Holliday and Ella Fitzgerald, the nostalgic-yet-modern sound of Amy Winehouse, and the defiance of punk poet Patti Smith. “I did play guitar in a punk band when I was a teenager,” she notes.

Her teenage years, however, were not steeped in music. High school at Miami Country Day was sports, day in and day out, as a point guard on the basketball team.

“Music was my soul, but basketball was my day job,” she says. “But I realized my first couple of years that I really didn’t want to play basketball at that level. High school sports is really serious, and it gets you geared up for college sports, which is really, really serious. I wanted to play because I was passionate about it, but I didn’t want that level of intensity.”

She received a partial scholarship, based on her drum skills, to Berklee, the performing arts and music conservatory in Boston that counts John Mayer, Quincy Jones, Diana Krall and the aforementioned Spalding among its alumni. Drum performance was her major until she realized it wasn’t going to be a good career fit. “I switched my major to composition—writing, arranging and production. Then I could do a little bit of everything.”

Had she not gone to school to major in music, she would have pursued her dreams of being a pediatric surgeon. “But then I realized what that entailed,” she says with a laugh.

Back in South Florida, only a year out of school and living in Miami Beach, she says she feels blessed that she is able to do what she loves to do—make music—at such a young age.

“My parents and I have lots of conversations about having the kind of influence and power that fame affords you, that you need to think about what you are saying and what you are doing,” she says. “My parents’ goals, and they have had an impact on me, are that they have their feet connected to the ground. They are steeped in passion, love, culture and tradition, and they have pure intentions when it comes to how they want to use their life’s work.

“People can do whatever they want with their fame. I like to think of it as influence, having people’s ear and earning their respect.”