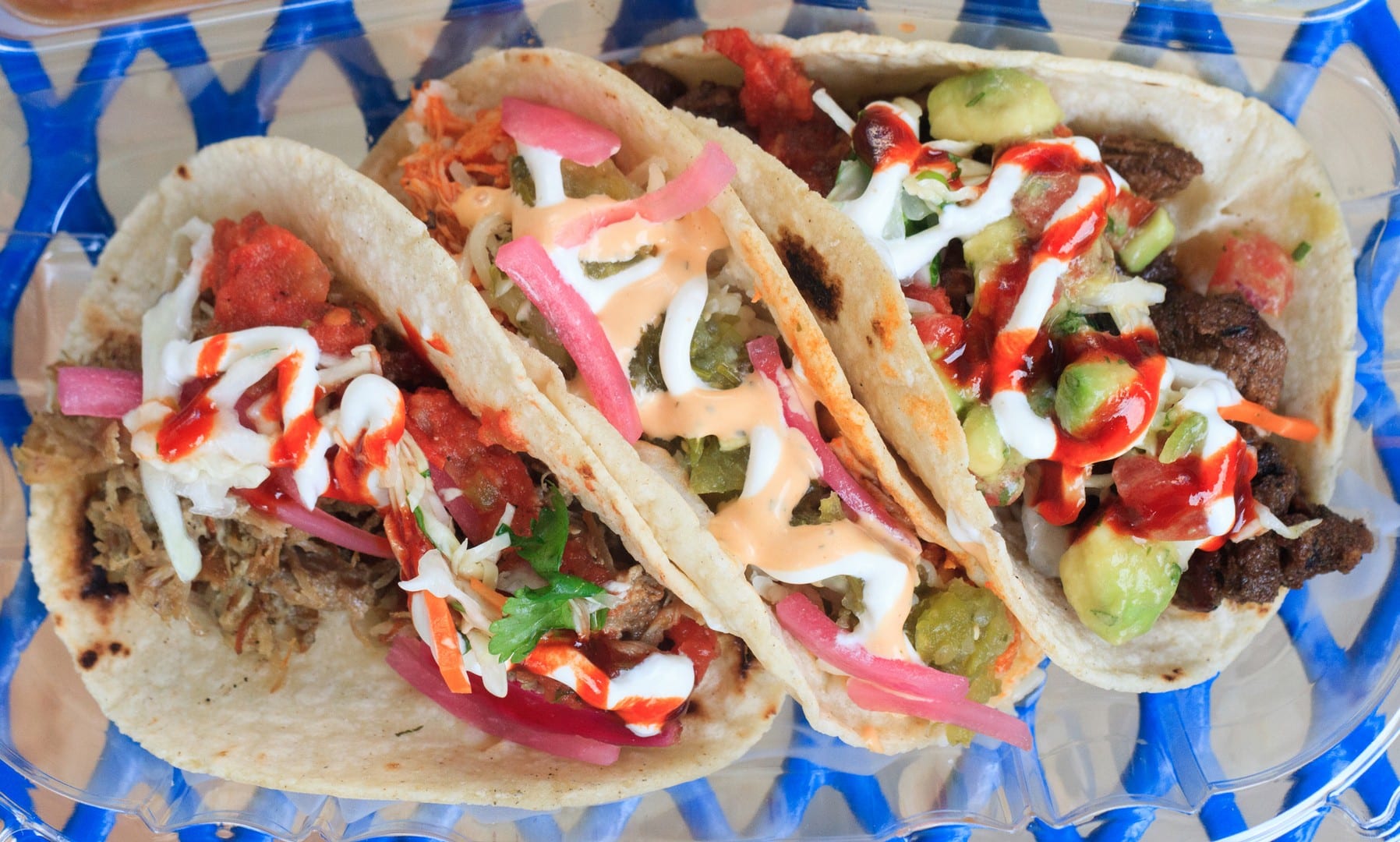 Inside a Chevron convenience store on the northwest corner of State Road 7 and Hillsboro Boulevard, there’s a line of people waiting to order tacos.

Executive chef Anthony Hoff of Boca Raton’s City Fish Market and longtime friend and local chef Robby Bushman are challenging the less-than-stellar reputation of gas station food at Los Bocados, the Parkland restaurant serving up refined tacos and other Mexican cuisine.
“It’s eclectic,” says Bushman of the concept that opened in October. “That’s a good way to describe our business and our clientele.”

They meet local business people stopping in for a quick lunch. A group of moms come in for dinner with their children. On a blind date, a man and woman eat at one of the blue picnic tables outside.
The idea for Los Bocados—which translates to “snacks,” “a bite,” or “mouth” in Spanish—was healthy, fast-casual, order-and-go. Half of its customers do that while the other half stay—and take their time. (One night, a group of 10 sat at the high-top table for three hours.) Pleasantly surprised, the chefs recently ordered more tables.

“In our eyes, we’ve always known this was going to be successful—we’re putting out a good product,” Hoff says. “If you put out good food, they will come. But we [also assumed] it was going to take some time; we didn’t expect it to escalate this quickly.”

In the 427-square-foot kitchen, the five-person staff makes everything “as healthy as possible, with the best ingredients as possible and with the most-sound cooking techniques as possible,” Bushman explains. From meats to sauces, it’s all made to order and handcrafted with the exception of the 4-inch masa tortillas made by a local artisan. The narrow menu features tacos served three at a time, a toasted carne asada burrito, a build-your-own Bocado bowl, and hongolitas: two mini quesadillas made with roasted wild mushrooms, Monterey Jack cheese, pickled red onion, smoky aioli and crema between two masa tortillas. The most common order is the off-menu taco combo, allowing customers to try chicken, pork and carne asada tacos. Every order comes with chips and salsa.

“Our big thing is every bite,” Hoff says. “When you bite into it, everything that you’re looking for is in there. You’ll get heat from the salsa, a little bit of crunch and a little bit of acid from the pickled red onions. Then the sauces on top … ,” Hoff trails off, closing his eyes and smiling.

Los Bocados, which recently began opening on Sundays, also has been taking catering gigs, from corporate parties to weddings. Next up is expansion—a second location in Boca is in the works.

The popular Wawa convenience store chain is on its way to becoming a South Florida staple. Out of the 50 stores it plans to build in South Florida, 10 are expected to open in Broward and Palm Beach counties this spring and into early summer.

The first locations will be at Sample Road and Federal Highway in Pompano Beach and at Belvedere Road and Australian Avenue in West Palm Beach, with Davie, Fort Lauderdale, Sunrise and Lake Worth to follow.

In business since 1964, the Pennsylvania-based company is known for its custom-made salads and sandwiches, fresh-baked cookies and free Wi-Fi.