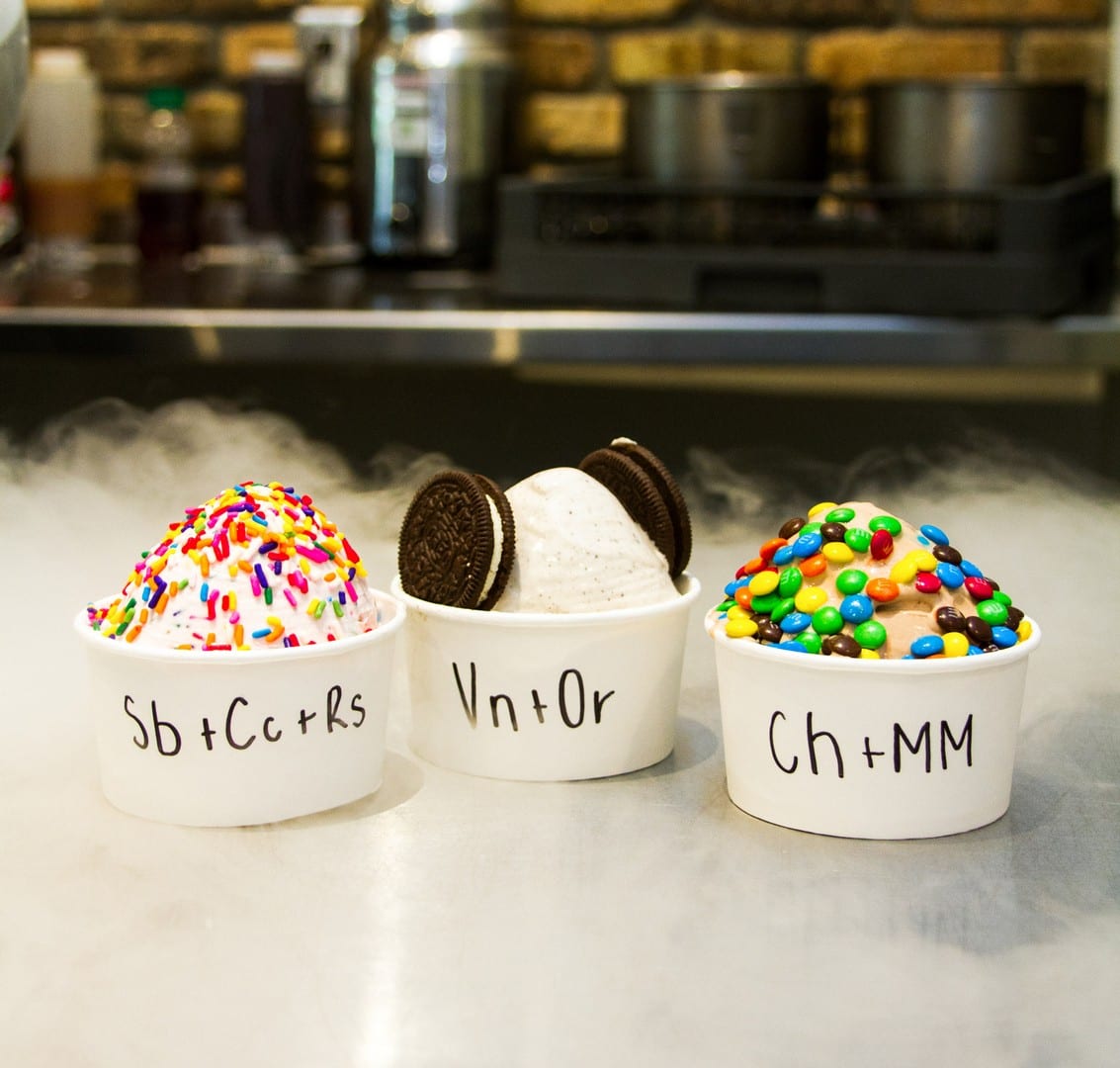 The little girl in the red polka-dot dress and matching bow gasped—the mixer churning her ice cream had started to smoke. She put her hands over her mouth, looked at her mother and giggled.

“Even the adults videotape it,” adds his wife and co-owner, Lori.

Dessert trends come and go, but when the Behrens walked into Chill-N’s first location two years ago, near their home in Pinecrest, they were confident this one would stick. Self-described ice cream lovers, they fell for the soft, smooth consistency created when nitrogen meets a liquid base. The line winding out the door proved they weren’t the only ones.

Chill-N was started by Danny Golik, a South Florida resident who, while taking a gap year before medical school, started experimenting with liquid nitrogen and cream in his garage with friends. He perfected his equation and opened a store five years ago in lieu of becoming a doctor. There are currently five locations from Miami to Coral Springs.

Looking to partner with Golik, the Behrens searched for a location to which he might want to expand. They landed on Weston. “There’s a lot of young people,” they said almost in unison. The unit they found was on a lake in a shopping center near Cypress Bay High School. Golik was in, and they opened their store, at 2238 Weston Road, in May 2016.

Chill-N’s theme is rooted in science. The ice cream bar looks like a lab, with a 2,000-liter tank of nitrogen that is refilled every week, a line of smoking mixers and a periodic table menu on the exposed-brick wall. Customers create their own formula: a base (ice cream, yogurt or coconut milk), a flavor (from nine, plus some that rotate seasonally) and mix-ins (which includes various types of chocolate, sprinkles, candy and other sweets). The 6-ounce batch is all theirs—unless they care to share, as the Behrens do every day.

All About That Base
None of the ice cream flavors are artificial, Lori says. Chill-N uses raw ingredients to create the flavors on demand. Real Nutella hazelnut spread, real peanut butter and real dulce de leche are scooped into a mixing bowl with the liquid base.

In a Flash
The mixing bowl is placed under one of the five mixers, which are connected to the nitrogen tank through tubes. At 320 degrees below zero, the nitrogen flash-freezes the liquid base into a solid in less than a minute.

Flavor in Every Bite
When the consistency begins to change from frosting-like to that of typical ice cream, the mix-ins are added to become part of the foundation. If you prefer your sprinkles dusted on top, just ask. “It’s special for you,” Lori says. “Your special creation.”

Crystal Clear
“The reason that is tastes so different is because the quicker you freeze the ice cream, the less ice crystals there are,” Bruce says. “There are essentially no ice crystals [in the ice cream]. When you taste it, you’re getting all smooth, freshly made ice cream.”

Get the Facts
A graphic chart hanging on Chill-N’s wall explains that nitrogen is safe to eat. More than 75 percent of the air we breathe is nitrogen. It’s odorless, tasteless and nontoxic.

The Lifestyle Formula
We couldn’t choose just one. Pictured: strawberry with rainbow sprinkles, vanilla with Oreo cookies, and chocolate with M&Ms.

Did you know?
In 1984, President Ronald Reagan designated July as National Ice Cream Month and the third Sunday of the month as National Ice Cream Day, according to the International Dairy Foods Association. He recognized ice cream as a “fun and nutritious food” enjoyed by about 90 percent of people.