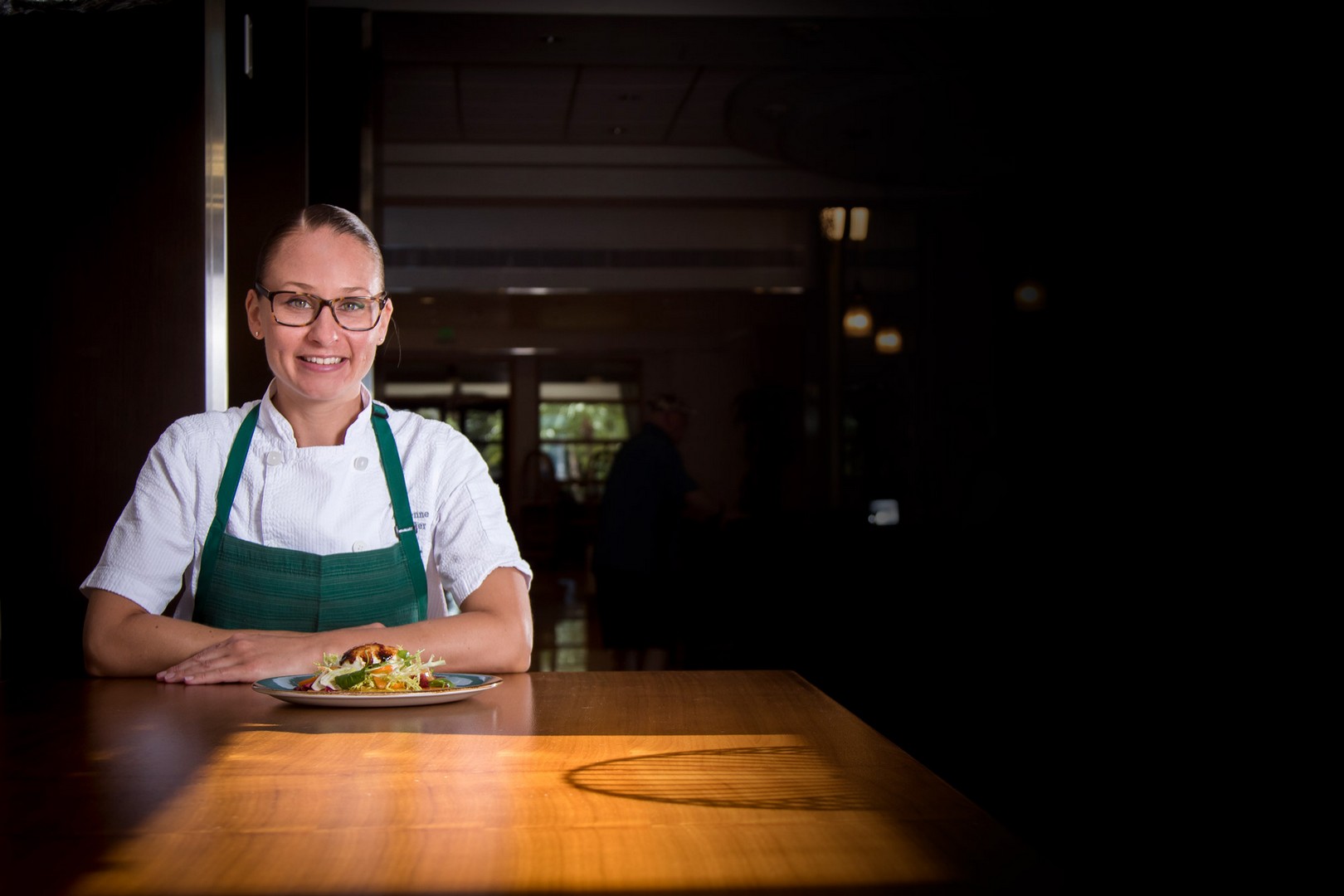 Adrienne Grenier commands the 3030 Ocean kitchen with the same vision that crowned her Food Network’s “Chopped” champion in 2012. Understated, yet bold, is the executive chef’s style, with no order too tall for the diminutive culinary star.

That doesn’t mean her job is without its challenges. For starters, she has to placate the palates of out-of-town hotel guests at Fort Lauderdale Marriott Harbor Beach Resort & Spa, while at the same time appealing to locals in search of a fine-dining experience.

Grenier walks that fine line by following her rule of green thumb—ingredients must be fresh. Nothing canned, processed or preserved. She’s accustomed to constantly changing trends in the restaurant business, but Grenier believes that a “respect for the ingredients” never goes out of style. That’s why she warns against any chef that “over-manipulates” foods, charging that dishes laden in heavy sauces and creams are used to make poor-quality ingredients taste better.

Her own fresh-to-table menu isn’t built entirely around calorie-conscious decisions, but it’s a healthy approach nonetheless. “My personal nutrition philosophy is moderation and making sure that everything is made of high-quality ingredients,” Grenier says. She especially enjoys it when guests order multiple courses of smaller dishes or sample a tasting menu. “When I personally think of fine dining, it should be an opportunity for a guest to try a lot of different things without being overwhelmed.”

The ever-evolving offerings at 3030 Ocean always include fresh seafood sourced from sustainable fisheries, where foods are harvested in a way that doesn’t harm the environment. Gulf shrimp, Florida grouper, local swordfish and snapper are staples of Grenier’s menu. Another constant, and one of the most requested entrées on the menu for repeat diners, is the restaurant’s hickory-rubbed Palmetto Creek Farms pork chop, a generous portion that comes directly from a family farm in Avon Park.

As much as she enjoys surprising her customers, Grenier says it’s important to pay attention to concerns and requests. For example, gluten-free is all the rage right now. Grenier, who studied food science and nutrition at Florida State University (and culinary arts at the Art Institute of Fort Lauderdale), dug deep to make sure 3030 Ocean’s menu was as gluten-free as possible. “We started using gluten-free soy sauce, and I discovered that even Worcestershire sauce has gluten,” she says. “So I found one that doesn’t.”

Grenier started her career at 3030 Ocean more than a decade ago, working as a sous chef under executive chef Paula DaSilva and its former executive chef Dean James Max. At 33, she’s taken what she’s learned from both professionals and incorporated it into her own style during this second go-round at the restaurant. Even the 70-hour work weeks don’t seem to curb her enthusiasm for what the next day might bring.

“I remember 12 years ago when I first started working at 3030 Ocean; I walked into the refrigerator and found these little, miniature oranges that you could eat whole, skin and all,” Grenier says about her discovery of a kumquat. “I thought, ‘What else can I find that I have never heard of or tried before?’ It was just about the coolest thing—to work at a place that would let me discover something new every day.”

1) Be adventurous: Don’t be afraid to try new things. Steer away from the simple or something you would cook at home. “This is the time to try something more interesting,” Grenier says. “What’s the worst that can happen?”
2) Ask questions: Servers in good restaurants should have tried most of the dishes on the menu. Grenier says her staff spends time in the kitchen as part of their training, so they should know the menu well. If a waiter or waitress at a restaurant doesn’t know the answer, request that he/she ask the chef.
3) Indulge without leaving stuffed: “Order pasta as an appetizer and then have a piece of fish with vegetables as the main course,” she says. “This way you can still have a little bit of what you crave, but you’re not making a full meal of it.” There always are at least two pasta appetizers on the 3030 Ocean menu.