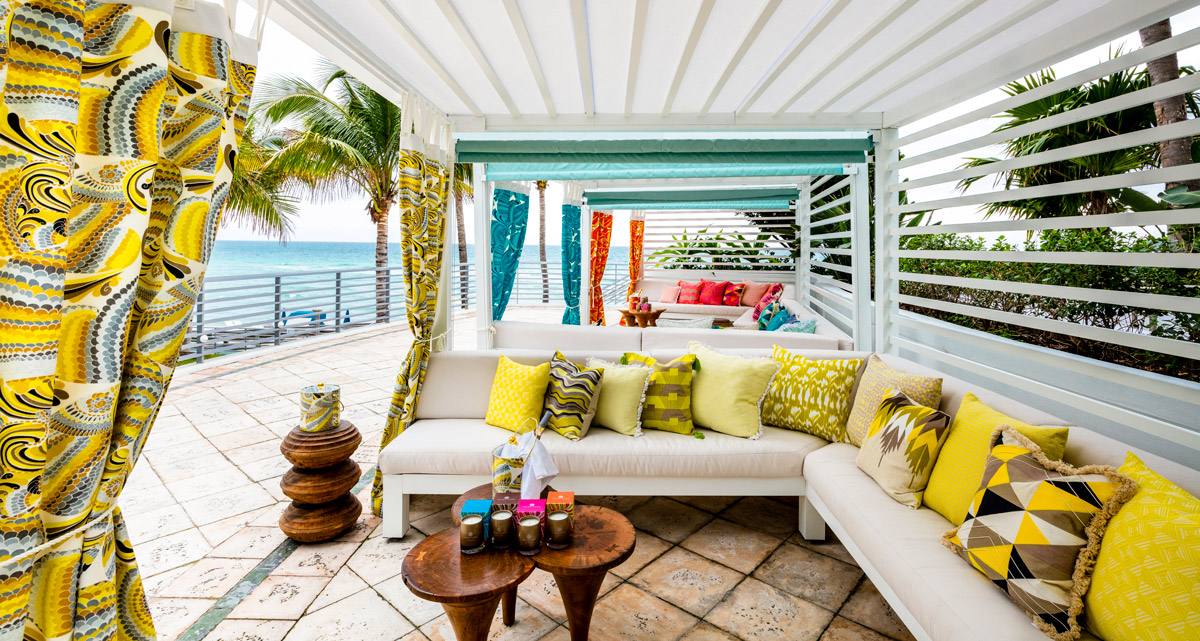 In the Spotlight: Great Escapes

The buzz: What does $100 million buy you these days in the resort industry? If you’re The Diplomat, a mainstay on Hollywood Beach since 1958, it’s a return to glory thanks to a jaw-dropping transformation that manages to find the sweet spot between sophistication and coastal comfort. The face-lift, which started in 2015, reimagined sightlines in the lobby and pool areas, capitalized on natural light and brought a casual elegance to the 1,000 rooms. Part of the Curio Collection by Hilton, The Diplomat now offers 10 culinary spots, including destination restaurants Point Royal from chef Geoffrey Zakarian, Monkitail from Michael Schulson and the iconic Diplomat Prime steak house. The cascading waterfalls and dramatic beachfront pools, including a Dip & Slide area for children, are among the many reasons to venture outside—as is access to the Great White Catamaran, sailing/yacht charters, water recreation activities and the nearby 18-hole golf course.
Summer specials: Fashion icon Trina Turk has partnered with The Diplomat for a cabana experience (pictured) unlike any other in South Florida. Along with a personal butler, the experience (starting at $1,500) features a create-your-own mimosa station, a mini massage, a Trina Turk ice bucket, and a $150 gift card to the Trina Turk boutique in Miami.
Contact: 3555 S. Ocean Drive, Hollywood; 954.602.6000; diplomatresort.com

The buzz: Jimmy Buffett is the inspiration behind this 17-story destination resort on the Hollywood Beach Broadwalk, but if you think the property named after the singer’s highest-charting solo single is about nothing more than watchin’ the sun bake, think again. For all its laid-back charms, Margaritaville also knows how to provide an adrenaline rush—thanks, in part, to the FlowRider Double surfing simulator, as well as access to stand-up paddleboarding and kayaking. Live entertainment is another staple of the property, with everything from acoustic guitarists and reggae to rock bands and rollicking party music that, on weekends, can go deep into the night. Still searchin’ for that lost shaker of salt? No worries. Bartenders gladly will salt your margarita glass at cocktail venues throughout the AAA Four Diamond-rated resort—such as the License to Chill rooftop terrace and the 5 O’Clock Somewhere Bar & Grill. JWB Prime Steak and Seafood gives guests an upscale dining option, while the two-story Jimmy Buffett’s Margaritaville provides more casual fare.
Summer specials: The Great American Summer Fun package, ideal for families, features free breakfast for children 12 and under, along with $25 per night in “summer bucks” for on-site recreational activities (rates start at $259 for a two-night stay). For those interested in a more intimate experience, the Summer Love Stories We Could Tell package promises a 50-minute Swedish couples massage at the St. Somewhere Spa, paddleboarding for two and a $100 nightly resort credit (starting at $399).
Contact: 1111 N. Ocean Drive, Hollywood; 954.874.4444; margaritavillehollywoodbeachresort.com

The buzz: Given the dearth of resorts right on the sand in Fort Lauderdale, having South Florida’s largest private beach in its backyard isn’t a bad selling point for this 16-acre property. But that’s just an appetizer when it comes to Marriott Harbor Beach and its 650 recently renovated rooms. The culinary roster is led by executive chef Adrienne Grenier’s inventive seasonal menu at 3030 Ocean; equally impressive is the indoor/outdoor dining at Sea Level, and the breakfast buffet and Sunday brunch at Riva. Family-friendly activities and perks include beach soccer, basketball, tennis, watersports, dive-in movies on Fridays and Saturdays—and poolside cookies and lemonade every afternoon at 2:30. Looking for a little revitalization? The 22,000-square-foot Spa at Harbor Beach Resort features 17 private treatment rooms, a separate spa pool and a fitness center with state-of-the-art equipment.
Summer specials: The Vacation Like a VIP package, good through Oct. 15, includes complimentary room upgrades, $100 in resort credit, valet parking, a $25 American Express gift card—and deals at participating museums, restaurants, spas, fishing/boating outlets and other destinations in Greater Fort Lauderdale, courtesy of the Convention & Visitors Bureau’s two-for-one summer savings program. Rates range from $309 to $539 a night.
Contact: 3030 Holiday Drive, Fort Lauderdale; 954.525.4000; marriottharborbeach.com

A hospitality revolution is playing out along Fort Lauderdale Beach, where developers such as Pawel Plata and his wife, Marta Gzella-Plata, are providing vacationers with lodging options beyond the high rise.

The Platas are at the forefront of a boutique boom, along with other hotel developers seeking to recreate what the Art Deco District did for Miami Beach.

“The boutique hotel movement is stronger than ever,” Pawel says. “Unlike many overdesigned and generic hotels, we want to stand out for preserving the historical authenticity of Fort Lauderdale.”

Plata and his wife, originally from Poland, moved to Fort Lauderdale in 2013, and soon bought a group of 1950s-era, mom-and-pop motels that sat steps away from Fort Lauderdale Beach. Instead of tearing them down, the Platas made multimillion-dollar renovations.

They already have introduced three of their properties as part of the Gzella Collection, each with a different personality, but all with the same appeal—cozy, no-frills rooms intended to create an intimate and personalized experience for travelers, while embracing the prime location near State Road A1A.

A staycation at the Gzella Collection’s Ikona, Fortuna or newly opened Fala provides an escape that doesn’t feel touristy. The properties are built to give the impression that you’ve checked into your own private paradise.

The jewel of the collection is the three-story Ikona, reimagined from the iconic Shell motel at 3030 Bayshore Drive and across the street from the behemoth W Hotel and Residences. There’s not much to rekindle memories of the Shell at Ikona except for the location, although Pawel notes that despite the motel’s ultra-modern sophistication, the “integrity of the original architecture of all of the original motels was kept intact.”

Ikona’s interior was designed by Blanche Garcia, a designer featured on Travel Channel’s “Hotel Impossible.” Pawel and Marta were fans of the show, so he decided to contact her.

Gzella also has Fortuna, formerly the Seaside Motel, at 350 N. Birch Road, which opened in 2016 and was built with families and affordability in mind. Two blocks from Ikona and Fortuna, the developers turned the former Seville Hotel & Apartments into a beachside retreat, Fala Hotel, at 3020 Seville St. The closest Gzella to the beach, there’s a third-floor penthouse with a private balcony and surrounding views of the Atlantic Ocean and Intracoastal. The developers are introducing Mirra Hotel in 2018, nestled between the Ikona and Fortuna hotels.