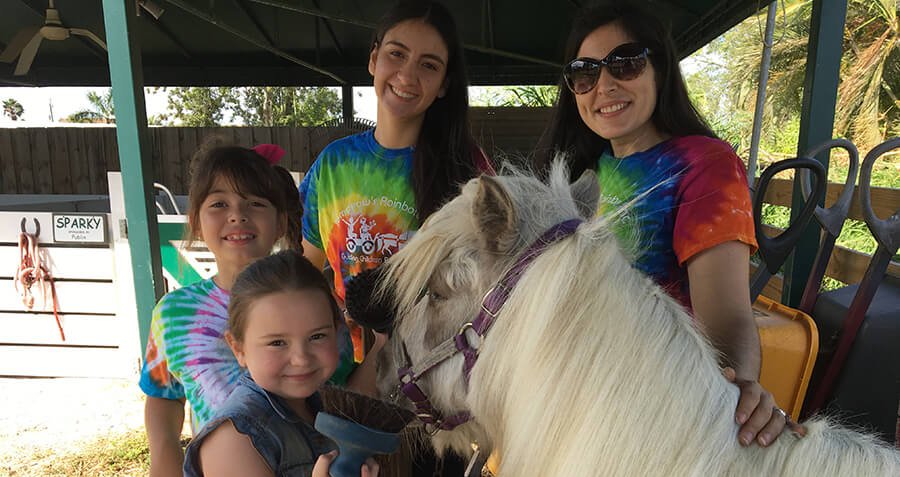 Hope Over the Rainbow

A personal grief journey leads to restoration for children

After her husband, Paul, was killed in an auto accident in Texas that also left her and her son, Dustin, hospitalized, Abby Mosher was confident that she and Dustin would return home to Broward County to resources to help them process their grief.

Mosher, who was then working with the Coconut Creek Elementary PTA, was surprised to find none. She used her late husband’s insurance to put Dustin in therapy, but the lack of assistance continued to gnaw at her. When other friends told her about the negative impact unprocessed grief had on their lives, Mosher felt compelled to act.

“Every Friday afternoon, I’d sit in the waiting room and wonder, ‘What do all the other children do in Broward County?’ The ones who don’t have the insurance benefits I had or $150 an hour for therapy,” Mosher says.

Mosher decided she was going to be there for grieving children. She bought a farm in Coconut Creek to create an oasis for children, which she called Tomorrow’s Rainbow. Soon after, she learned of the therapeutic effects of horses and integrated equine therapy and peer support groups. Since it opened in 2005, thousands of children have visited.

“Kids feel so much better in the outdoors and nature than being in four walls,” Mosher says. “And, truthfully, most people who’ve had a loved one die don’t need therapy. They benefit from the support of their peers.”

Today, there are more than a dozen animals at Tomorrow’s Rainbow, including miniature donkeys, miniature horses, Shetland ponies, a goat and a pig, Flloyd. Mosher says working with horses gives children much-needed routine and also helps them tell their stories.

“While they’re grooming the horses, I can say to them, ‘What do you think is going on with Sparky today?’ And they’ll tell me how he had a bad day. He started crying in the cafeteria, and the kids made fun of him and he doesn’t have any friends and he misses his dad,” Mosher says. “What they’re doing is telling their story through the horse until they feel safe enough to tell it in first person.”

Recently, the organization has become more needed than ever. From the day of the Parkland shooting (Feb. 14) to early March, the farm opened nightly to the public. Marjory Stoneman Douglas High approached Tomorrow’s Rainbow about helping students. They currently have a support group for students who knew victims as well as groups for teachers and siblings of students.

“There’s going to be some long-term effects, so we’re here to support for the long haul in whatever way we need to,” Mosher says. “We know that this is certainly a marathon, not a sprint.”

Helping the children of MSD is just one way Tomorrow’s Rainbow has influenced children in South Florida. About a dozen groups of children regularly meet at Tomorrow’s Rainbow, reducing the need for clinical intervention and, ultimately, Mosher says, saving their lives.

“… Here, they feel so at peace, so at home,” Mosher says. “They leave here, they’re skipping, they’re happy, they’re joyful. They got it all out and they don’t have to carry it around inside.”