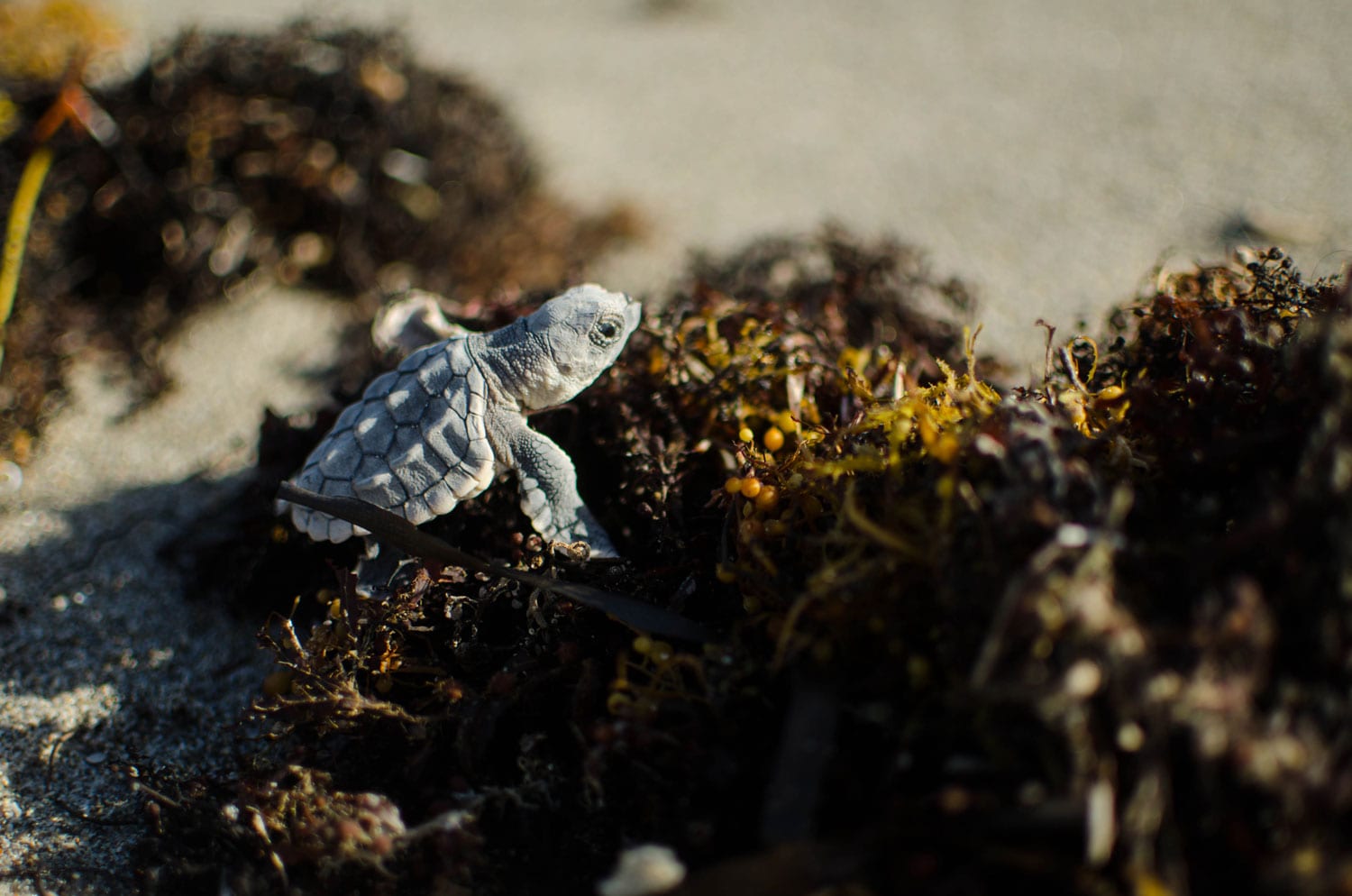 ‘Hopefully In 15 Years They Come Back’

Park Ranger Dave Jackson is about to dig up baby turtles and count shells. He looks up to see if everyone’s paying attention.

Jackson’s accent is heavily Caribbean; he chuckles and explains that he’s from Georgia. He has just removed a grid of metal wiring and the spokes that held it down, the cover for a sea turtle nest laid months earlier—park rangers scan the beaches at night for turtles nesting and set up barricades around the nests to protect them. When they hatch it’s time for Jackson—who’s been doing this for 25 years—to take a closer look.

“Here we go,” says Jackson, his boots sinking into the sands of Dania Beach’s John U. Lloyd State Park. He locks his hand into the shape of a tractor shovel, cocks his arm, and blasts this human crane into the ground. Within seconds, the hole he’s digging is a foot in diameter and two feet deep. Then the eggs start coming, Jackson grabbing a few with each dip into the sand.

Some of the eggs are white and cracked, translating as successful births. Some are yellow-green and deformed, meaning unfertilized eggs. And then comes the icing—little sea turtle hatchlings who made it out of their shells but got otherwise trapped or overburdened in the sand.

“He can spot a turtle a mile away,” says Carmelo Duessler proudly about Jackson. Duessler, a state park services specialist, is Jackson’s boss. He’s been doing this for 37 years and retires in two-and-a-half.

Jackson is working on nest 110. One of the spokes he pulled out earlier was etched with “110” to mark the number of nests spotted so far this season at John U. Lloyd. Being at 110 nests after the season’s peak (in July) is not ideal, but it’s not that bad, either. Last year was fantastic with 308 nests, but most seasons see less than 200.

As Jackson takes out each little turtle, he places them gently on the sand and returns to his hole, looking for more. The baby animal flutters its flippers wildly and begins its trek to the ocean’s edge. There’s no nudging or pushing coming from Jackson. It’s “always a good idea to let them out far up,” Jackson says. This way, they build up strength getting into the ocean, strength they’ll need to survive.

Seagulls appear ten or twenty yards down the beach, but Jackson says they can’t be harried. They deserve as much respect as the turtles, and if they choose to snatch one, well, “you don’t get second chances in nature,” says Jackson. Duessler says studies estimate about only one in 1,000 turtles will reach adulthood, which takes 15 or 16 years. Those who make it will hopefully come back to nest here in South Florida.

Nest 110 is on top of a mini levy, maybe five feet up a narrow stretch of beach. It’s narrow because of erosion. The park’s northern neighbor, Port Everglades, has a jetty that blocks sand from drifting to it and thus inhibits the coastline’s ability to replenish. That’s just one of the issues facing sea turtles that arrive to build nests.

“If we were in a perfect world, there’d be no jetty,” Duessler says, squinting from the morning sun and pointing at the stretch of sea where ships leave for their commercial endeavors. “[The beach] is eroding away and nothing’s coming back to take its place.”

The nesting season starts in March and ends on Halloween every year, making this the last month hatchlings will be crawling their way to the ocean. If 110 nests have made it thus far, chances are that another 100 or so turtles arrived but decided not to lay eggs, for a multitude of possible reasons. It’s called a “false crawl,” and Lifestyle turned to the Florida Fish and Wildlife Conservation Commission (FWC) to figure out why it happens.

The FWC is an arm of the state’s Fish and Wildlife Service, responsible for “conservation and recovery efforts”—everything from counting and rehabilitating sea turtles to conducting sea turtle research and educational programs about the hard-shelled reptiles.

FWC environmental specialist Meghan Koperski says that false crawls happen because of thinner beach width, a higher water table (the level of the water under the beach), sand composition, beach furniture, jet skis, tents, lights, etc. Building a home or structure adjacent to the beach does not necessarily hinder any egg laying, but hardening the shoreline—with seawalls, for example—does. About 50 percent of all sea turtles who arrive at a beach are likely to leave without nesting.

“If there’s no sand on the beach that’s dry all the time, those nests won’t incubate,” says Koperski, who’s been working with turtles since 1996. “Having a good beach is very important for sea turtles.”

Broward’s turtles have probably been nesting here for hundreds, possibly thousands of years, Koperski points out. The process has been going on since the age of dinosaurs. “We’re very lucky that this process occurs here. Folks in the panhandle are mighty jealous of folks in South Florida,” she says.

Jealous or not, no one really knows why sea turtles love South Florida’s coast so much. While turtles are known to hatch on beaches stretching from Virginia to the Keys and up the Gulf coast all the way to Texas, our coastline is by far the most popular. Turtles that nest on Broward County beaches may forage in the Bahamas, the Keys, or elsewhere, but they all end up here—though how they find their way is another puzzle. Theoretically, turtles use geo-magnetic fields (the same way birds find their direction when migrating), but scientists still don’t understand how they use these.

For all their mystery, sea turtles fall for some pretty simple trickery. Pointing at the harbor master’s building, visible from his office in the park, Duessler says that at night the “loud” lights attract both nesting turtles themselves, and later their hatchlings. Both the turtles and hatchlings sometimes get as far as the handful of trailers that make up the park’s offices and die there. Even though the park has a “coastal strand,” or a line of trees that acts as a light barrier for the beach, some glow makes it through. And if those lights don’t confuse the turtles, then skyglow—reflecting from nearby residential or commercial areas—will.

Duessler, whose hands are calloused from decades of beach work, lowers his otherwise peppy voice when he talks about the harbor master’s building, the coastal strand and the skyglow: “There’s just nothing you can do about that.”

Jackson, who retires later this year, starts filling up the hole with sand. He’ll evaluate another five or six nests before going home.

“It brings a smile to your face,” he says. “Every hatch is beautiful.” Jackson’s house in Jamaica is just waiting for his retirement. Duessler admits it’ll be hard to find a ranger as efficient as Jackson, who often finds nests that other rangers dismiss as false crawls.

As he turns to leave the beach, Duessler steps down closer to the water and points at a fresh set of tracks leading to a new nest. “It’s always good to see two sets of tracks. That way you know she got back out,” he says.

Here are some tips from Florida Fish and Wildlife Conservation Commission (FWC) expert Meghan Koperski on how to make our beaches more suited for sea turtles. Remember, she says: You’re sharing the beach with your neighbor humans, but also with turtles and other animals. Treat them like friends and respect their home.

• Make sure you flatten any sand castle you build or fill in any holes you dig—both hamper sea turtles crawling to and from the sea.

• Pick up any trash you or someone else leaves. Debris can entangle nests, turtles, and, of course, other marine life.

• Brought something to the beach? Likewise, take it home. It’ll keep things like umbrellas from damaging turtles.

• Out on the beach at night and see a beach turtle? Don’t flash your light on it, meaning don’t try to post it on Instagram or Facebook.

• Recycle your monofilament (fishing line). Entanglements cause the highest number of stranded animals that the FWC encounters.

• Get involved as a Sea Turtle Oversight Protection volunteer. Broward’s turtles need you. To learn more, go to www.seaturtleop.org