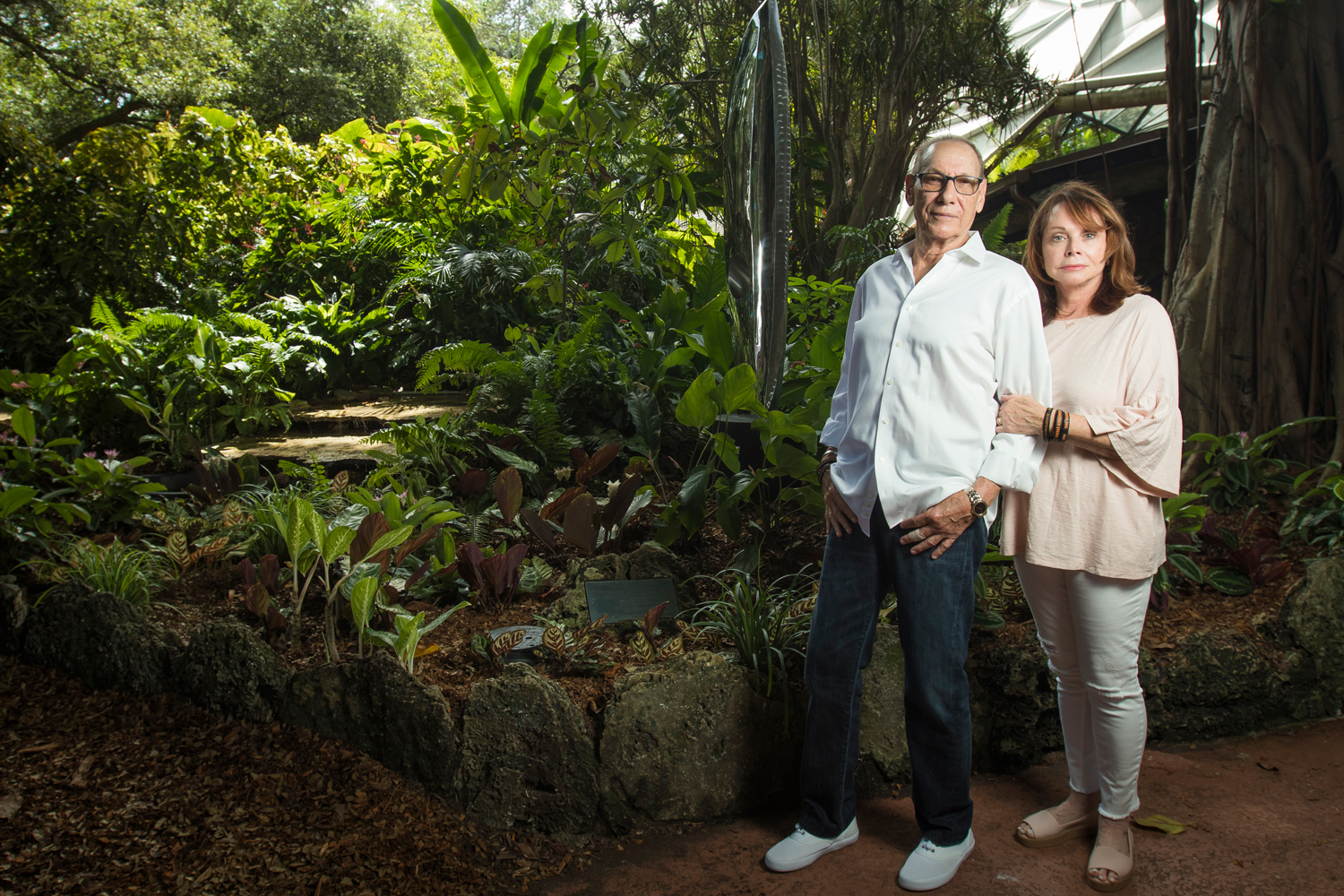 Art Sotloff remembers the nightly video calls with his son, Steven, as if they were yesterday. “No matter where he was, in Syria or Turkey, in Egypt, we would talk, even if it was 3 or 4 in the morning here.” Steven and Art would chat about their favorite sports teams, the Miami Heat and the Miami Dolphins. Steven would ask how Art’s golf game was shaping up.

The last time he spoke to his father, Art recalls, Steven told him not to worry.

That was easier said than done for Art and Shirley Sotloff. Their son was working as a freelance journalist in some of the most dangerous parts of the Middle East. In August 2013, the night of his final Skype session with Art, Steven was in Turkey. The next day, he had plans to cross the border into Syria to cover the civil war in Aleppo. Steven said something that evening to his father that he never had uttered before:

If Art didn’t hear from his son within four days, he should notify one of Steven’s colleagues.

The memory hangs heavy in the air as Art and Shirley sit briefly in silence inside the Pinecrest home where Steven grew up.

Steven Joel Sotloff will be remembered as a casualty of war, but his life and legacy represent more. He became an international symbol of the terror perpetuated by the militant Islamic State group—aka ISIS—which abducted him at the Aleppo border on Aug. 4, 2013, three months after his 30th birthday, and held him hostage for 13 months. On Sept. 2, 2014, the group posted a video of Steven’s beheading; the graphic murder, his executioner would say on the video, was in retaliation for U.S. airstrikes against the group in Iraq.

Art pages through a 3-inch thick, three-holed binder that contains clippings and other papers, neatly indexed. There’s the ransom letter emailed to five addresses that the captors took from Steven’s computer. “It got to two of the names,” his mother says. Then the FBI got it and contacted the Sotloffs. One hundred million euros ($137 million in 2014) would secure Steven’s release.

There’s the final letter to his parents and sister, Lauren, in Steven’s handwriting. “It was his goodbye to us,” Art says. “It was smuggled out by one of the hostages in April 2014. In the letter, he was more worried about us than anything. He was apologizing and saying he was sorry for what he was putting us through. He said that we should hug and kiss each other every day, have dinner together every night, and don’t fight over stupid things. Instead of writing about his situation, he was communicating to us that we should find closure, and that was very sad.”

One of the quotes in the letter has become the statement the family uses for 2Lives, the foundation dedicated to the safety and education of journalists that the Sotloffs launched to “keep Steven’s name alive,” says Shirley, a preschool teacher at Temple Beth Am Day School.

“Everyone has two lives,” Steven writes in the letter. “The second one begins when you realize you only have one.”

DEALING WITH THE UNTHINKABLE

Art continues flipping through the binder. There is more indexed information: a paper with an image of a Google satellite view of the compound where they believe Steven had been held. There are also emails from people asking the family for help. Art reads one aloud.

“We get these all the time; I just got this one the other day. ‘Hello, Mr. and Mrs. Sotloff. In 2016, kidnappers took my work buddies. I want to know what I can do to help their release. One is a U.S. citizen, and one is Australian.’ ” Art pauses. “What can I do for him when I couldn’t even save my own son?” he says.

The Sotloffs tried to have their son released. Going through the turmoil of knowing Steven was alive and in captivity, they joined together with other American families whose children had been abducted. John and Diane Foley, whose son, James, also was a journalist, became allies.

While the stories about the closed doors they found at the White House and in Washington, D.C., are too many to recount, Shirley says they learned far more than they wanted to about the U.S. government and the troubles in the Middle East.

“We tried for a whole year, and more,” says Art, a longtime sales executive with Home Show Management Corp. “We went to Washington for three trips during the 13 months that Steven was being held.” After their son was shown alive in an Aug. 19, 2014, video that included Foley’s execution—it also stated Steven would be the next to die—the Sotloffs thought there might be hope to have their son released.

“That video was the first time in [more than a year] that we had proof he was still alive,” Art says.
After they saw the ransom letter, Art and Shirley wondered how they could possibly raise the money. But the wheels started turning. “When it is your child or a family member, you’ll do anything to get them back,” Shirley says.

Only, they couldn’t. U.S. policy prohibits ransoms to be paid to terrorists. The Sotloffs were told that they would be prosecuted, and their donors could be prosecuted as well. In June 2015, the policy changed slightly, according to information posted on the White House’s press office page. “The U.S. Department of Justice does not intend to add to families’ pain in such cases by suggesting that they could face criminal prosecution.” However, the “no concessions policy” remained. Lisa Monaco, assistant to President Barack Obama during the time of Steven’s capture, said the policy was difficult because “innocent lives are put at risk. On the other hand, this fuels the activity that puts them at risk in the first place.”

Shirley believes that, had they been able to pay the ransom, they could have saved Steven’s life.

A LIFE IN PRINT

The media circus that started after the Foley video added insult to injury, and was almost unbearable, the Sotloffs recall. “From the minute that Steven appeared on TV and it was said that he was the next to die, there must have been 25 television trucks outside my front lawn,” Art says. “After Steven was murdered, they were back and relentless.”

Curiously, Steven never dreamed of becoming a reporter, although, as a child, he wrote horror stories. Art remembers when his son dropped out of the University of Central Florida after three years. It was 2005, and he had taken a trip to Israel sponsored by the Taglit-Birthright Israel Foundation. He had gone on a previous trip during his freshman year, but this time, he had changed.

“When they are 18, they come back from being abroad, and they are different,” he says. “That happened to him, and then he went on a Birthright and stayed an extra week. I asked him when he was going back to school. He said, ‘I decided I don’t want to go to UCF anymore.’ ”

He returned to Israel in 2008 to finish his undergraduate degree at the Interdisciplinary Center Herzliya. After graduation, Steven began his freelance journalism career, filing stories for the Jerusalem Post newspaper and Jerusalem Report magazine. He contributed to Time, Foreign Policy, The Christian Science Monitor and The Media Line, which covers the Middle East.

When he crossed into Aleppo before his abduction, it wasn’t his first trek there in search of stories about its civil war. In 2013, he visited a Syrian refugee camp, where he walked among the refugees. In a story in Foreign Policy, a magazine which frequently bought his articles from the front lines, he wrote that he had asked a woman why she didn’t have a blanket like everyone else at the camp. “[She] shrugged and looked down. ‘I sold it to buy bread for my children,’ ” Steven wrote.

“Everyone said what he wrote was so [deep],” Art says with a father’s pride. “He had this ability to sit down with people, and they would open up to him.”

Art and Shirley spend time at Pinecrest Gardens, where the Steven Sotloff Memorial Garden was dedicated on Sept. 12, 2015. The 5-foot-tall memorial makes no mention of Steven’s death; its message is the wish for peace that Steven sought through journalism. Located under the Great Banyan Tree in a shaded area with nearby seating, the garden is centered on three water features, referring to Heaven, Earth and Man.

In the backyard of the couple’s Pinecrest home in a gated community, just beyond the pool where Art says he swims every day, there’s a headstone and a magnolia tree that the Foley family sent them “because someone had given one to them.”

The Pinecrest home has become a refuge for Art and Shirley. There are family pictures on a table in the living room. Shirley says she keeps some out in view, but others she’s put away. Maybe she’ll be able to show them all again some day, she confides. On a mantel across from the table is a photo of a smiling Steven with a saying printed next to it, “Courage is fear that prayed and decided to move forward anyways.”

It holds a double meaning for the Sotloffs because it was made for them by board member Frank Urrutia of their 2Lives Foundation. Art and Shirley credit Urrutia and Tracy Ellyn of the board with advancing the foundation’s many causes—among them, offering scholarships at the University of Miami and at the boarding school Steven attended in New Hampshire, Kimball Union; and partnering with ACOS Alliance, a coalition to develop protection standards for freelance journalists, and Hostage US, which supports hostages and their families during a kidnapping crisis.

Art is especially proud of 2Lives’ latest pet project. “We’re raising funds to begin a sustainable program to provide pro bono training to at least 16 qualified freelance journalists to come to the University of Miami by the summer of 2018,” he says. Working with a company called Global Journalist Security, 2Lives would teach students how to work in “hostile environments” and prepare journalism students to cover dangerous assignments “both at home and overseas.”

The Sotloffs heard from another journalist who had been sitting with Steven the day before he crossed the border into Syria. “Steven [told him] he was tired of being pepper sprayed and shot at,” Art says. “This was going to be his last trip. He was going to come back home and get his master’s degree, maybe get married and have a 9 to 5 job.”

Shirley says while time has passed, the wound remains fresh. “There’s an emptiness, there’s a big hole and, quite honestly, I don’t know how to get out of it. I have a tough time. People say, ‘I admire you,’ but … .” She trails off.

Steven’s body never was found. She says from the videotape it looks like maybe he was slain at the edge of Raqqa. “We will never see his body,” Shirley says. “In one way, I would like a piece of him, but I don’t know if I could handle that. Maybe someday something will be found and they will return it home.”
When asked if that might give the grieving mother some closure, she responds quickly.

“Closure? How could there ever be closure?”