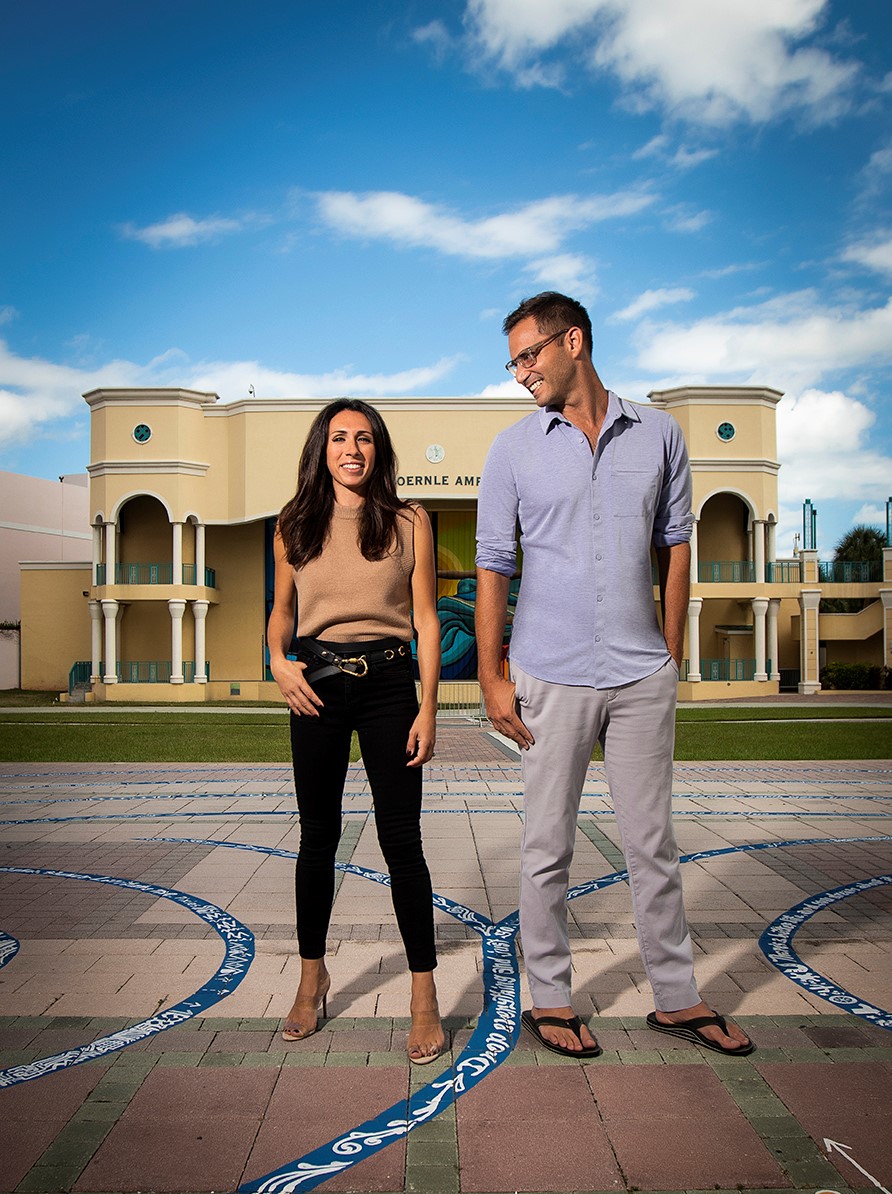 Stop us if you’ve heard this one:

A stand-up comic and a TV reporter climb into an SUV. He takes the wheel. She’s ready for a glass of Chardonnay. They’re bored silly from sheltering in through the COVID-19 pandemic and finally are cruising the surroundings near their new home in Boca Raton.

Here’s the punchline: They see comedy gold in the green lawn of Boca’s posh playground of buzzy restaurants and upscale shops.

The couple’s creative wheels start churning and now, ladies and gentlemen, we direct your attention to the amphitheater stage—and away from COVID craziness—to introduce the Siegels’ year-long, passion-driven project: Comedy on the Green.

They’re bringing a whole new meaning to good, clean fun with an open-air venue, socially distanced seating and top-notch comics ready to superspread nothing but infectious laughter. The Mizner Park series launched in late October, with additional shows scheduled in November and December. If the concept takes off, the Siegels envision expanding nationwide.

“The way we branded it is, it could be anywhere,” Stephanie says. “It could be Comedy on the Green Red Rock, Comedy on the Green Orlando. … The vision is outdoor comedy clubs. I think COVID has completely changed people’s appetite for this stuff. Maybe not everyone, but it’s going to be a cool enough experience that, post-COVID, it still works.”

On a steamy September morning, the Siegels show up at Mizner Park looking South Florida chic. Stephanie’s rocking a Carrie-Bradshaw-Sex-in-the-City-of-Boca-Raton look in skirt and a midriff-baring jacket. Dave is drop-the-mic South Florida cool in shorts and shades. They’re an engaging couple but not in the finish-each-other’s-sentences sense. Instead, they rear-end each other’s thoughts with corrections, clarifications and plenty of clowning around. 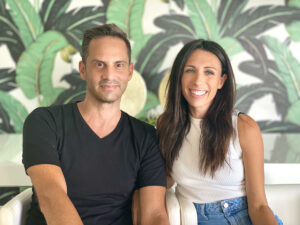 Dave, 45, has done stand-up for more than 20 years, scaling back to part-time gigs when the couple was married in 2013. He’s also a writer and producer for Ashleigh Banfield’s NewsNation show Banfield, working out of a makeshift studio in his garage since the Siegels moved from New York last year.

He came to pursue comedy not so much via the stereotypical class-clown route but through introduction to the classic Catskill Mountain comedians.

“My parents were big into comedy,” says Dave, who grew up on Long Island. “They were Borscht Belt Jews. They would bring me to see any comedian at the Westbury Music Fair.

“I had a comedy education at a very young age. By the time I was 16, I had seen Rodney Dangerfield, Buddy Hackett … Joan Rivers. It’s definitely what got me immersed into it.”

While attending American University in Washington, D.C., he was a doorman at the D.C. Improv and soon was on stage for the first time at The Comic Strip in Manhattan’s Upper East Side.

“They would appraise your performance,’’ Dave says. “They gave you five minutes, and I kept working on my five minutes on my Walkman. The host was a comedian, and she was the one who gave you the appraisal.”

Dave did his set, then watched other comics, including his harsh appraiser. “So, I’m listening to her critique and I’m thinking, ‘I’m funnier than her,’ ” Dave recalls. “It kind of put a little chip on my shoulder. I thought, ‘You know what, I want to do comedy again as soon as possible.’ ”

Stephanie can’t resist chiming in: “What happened to her?”

Turns out, Dave’s self-appraisal was spot on. His career has spanned clubs from New York City to Los Angeles, and he’s been the opening act for David Alan Grier, Richard Lewis, Jon Lovitz, Tim Meadows, Kevin Nealon and, much to the delight of his parents, one of their favorites, Dom Irrera.

The Road to Boca

Fittingly, the story of “When Dave Met Stephanie” starts with a mutual friend giving her tickets to one of his shows in Los Angeles. He was living there as a comic. She was on hiatus from her budding broadcast journalism career.

Friendship led to romance and less than a year later, Dave returned to New York to be with Stephanie, who was back into reporting, first with News 12 Long Island and then WPIX in the city.

Stephanie, 38, a Syracuse grad from Philadelphia, began her career with a stint at a TV station in Gainesville, where she witnessed the execution of serial killer Danny Rolling. She later worked in Fort Myers, where she scored an exclusive interview with then-Barack Obama running mate Joe Biden.

In New York, she won an Emmy for her coverage of Hurricane Sandy. Stephanie loved the rush of pursuing big stories, but the grind eventually wore her down and she left the business … kind of. Big into visions, she had one.

“I like to think everything can be the next big thing,” she says.

She co-founded Reel Media Group, which trains aspiring broadcast journalists, in part by helping them to create demo reels delivered not in front of green screens, but on the scene of actual news events.

RMG also provides what Stephanie calls an “authenticity curriculum” designed to “teach reporters how to be more themselves on TV rather than these robots.”

“It’s like the opposite of the coaching I got,” she says.

Fortunately, Dave’s talents were the perfect fit for a funny man frontier in TV reporting and he landed a writing job at CNN.

“At that time, The Daily Show was the big thing,” he says. “Jon Stewart, Stephen Colbert, Steve Carell were on it. So many young people—the demographic everyone wants—were literally going to The Daily Show for their news, which had never happened before.

Dave was hired to write lighter news segments for the likes of Erin Burnett and Jeanne Moos. Eventually, those segments were eliminated, but CNN asked Dave to stick around and write—no joke—hard news.

“So, I’m working at CNN and taking classes at the Columbia School of Journalism to develop the chops of a hard-news journalist,” Dave says.

The studying paid off. He wrote for Anderson Cooper and Don Lemon; the job lasted eight years before he moved on to the A&E reality show Live Rescue hosted by Banfield.

The bad news? The show was canceled in January 2020. The good news? Dave and Stephanie decided the time was right for a long-anticipated move to Boca Raton. The even better news? Their sudden relocation to South Florida turned out to be a narrow escape from New York’s COVID hell.

“It seems like horrible news to find your show is canceled,” Dave says. “In hindsight, it was like the biggest blessing in disguise ever. We were on the 14th floor of a 25-floor building. I know in the beginning, we wouldn’t even have been allowed to take the elevator.”

Stephanie knows how that nightmare would have turned out.

“We would have been divorced,” she says. “I would have run away in the middle of the night with my two kids. … I would have lost my mind, and he would have woken up, and I wouldn’t be there.”

Dave quickly considers a more likely ending to that scenario.

“I would have been happy to wake up without a knife in my chest.” 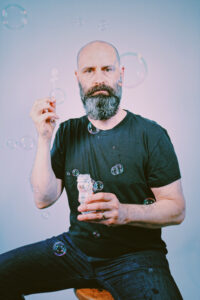 It’s no surprise that life at home—we’re looking at you, Stephanie—provides plenty of material for Dave’s brand of observational comedy.

“I get mad sometimes sitting in the audience,’’ Stephanie says. “I want to scream out, ‘That’s not how it is! I’m not an idiot!’ ”

For a daffy dose of Dave’s comedic mind, check out his White Guy Indifferent videos on YouTube, where he injects a goofy, out-of-touch character’s reactions into actual newscasts about people all worked up over various topics.

Outrage about a Popeye’s running out of a special? “They seem to be out of chicken today. So, I’ll just pick up a pizza. It’s no big deal,” says White Guy Indifferent.

Through years of visiting relatives and vacationing, Dave and Stephanie have strong ties to South Florida; their wedding was at The Boca Raton Resort, where her parents are longtime members. In the Mizner Park Amphitheater, they see a gem of an underutilized venue. In Boca Raton, they see people primed to spring for quality entertainment.

“I don’t understand why nothing major comes here,” Stephanie said. “I mean, there are people with money!”

When it comes to Comedy on the Green, the Siegels are dead serious about creating what Stephanie half-jokingly calls “a comedy empire.”

Of course, you can’t start tickling funny bones without tapping into some up-front cash. Dave and Stephanie have dipped into their savings, “called in a lot of favors,” and sweated the details, including the series title. They chose not only to avoid the typical, zany comedy club names but to pay homage to their longtime stomping grounds in New York by playing off Central Park’s iconic Tavern On The Green.

The-next-big-thing ambition aside, Stephanie is just giddy about giving Dave another outlet for his stand-up game.

“I felt bad for him,’’ she says of moving away from the Big Apple’s many club opportunities. “You see him—he comes alive doing comedy.”

Besides, these days, who couldn’t use some belly laughs? Even in Boca.

Comedy on the Green