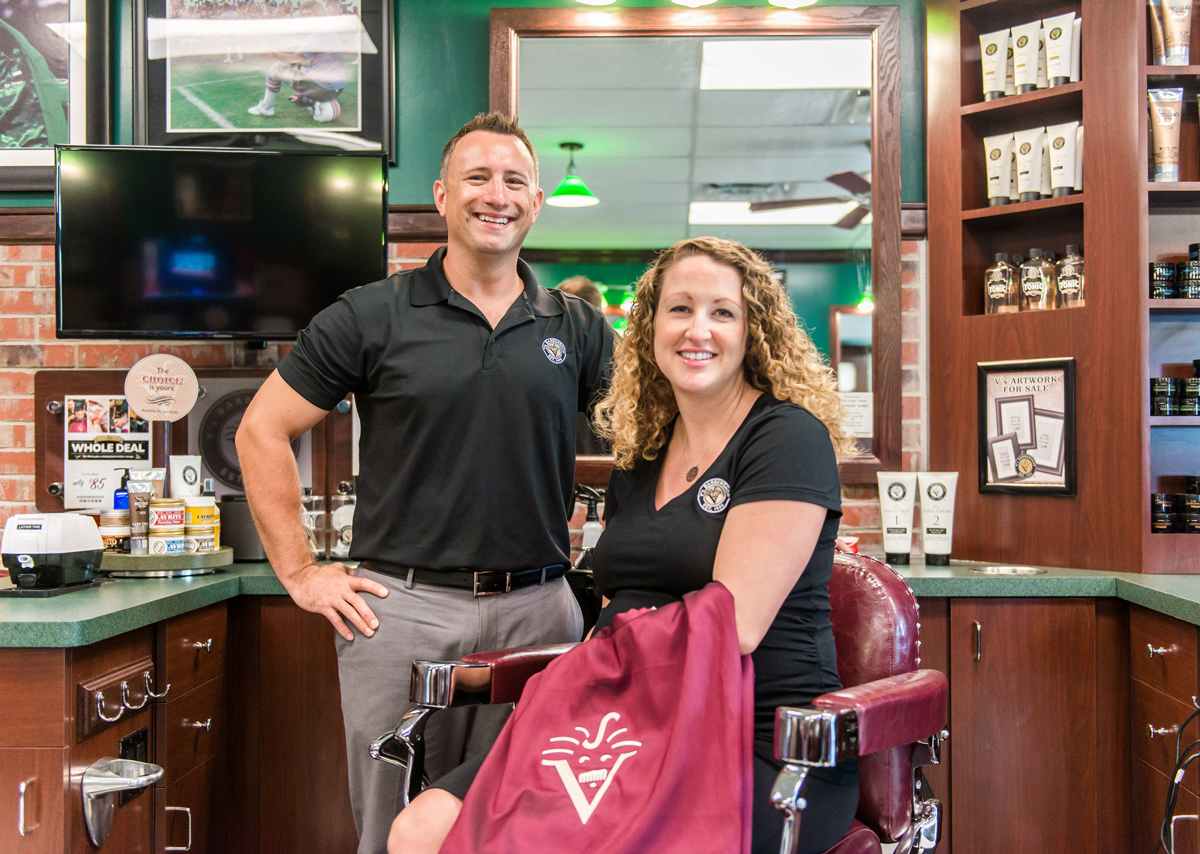 Lean Back and Enjoy

What happens when a husband and wife with corporate backgrounds—he’s a marketing and operations specialist who cut his business teeth at the Boca Raton-based headquarters for Office Depot; she’s an accountant who helped Spirit Airlines during its initial public offering—decide to start a family and take an entrepreneurial leap at the same time?

If you’re Keith and Jenna Keltner, you invest in the first V’s Barbershop franchise in South Florida—and you officially open your doors in Fort Lauderdale the week that Jenna is due to give birth to their son.
It might sound like the makings of a Bravo reality show, but nothing about the Keltners’ game plan was unscripted. The couple already had franchise experience, having bought an Orangetheory Fitness in Royal Palm Beach. But with the prospect of a newborn in the mix, the work drive from Broward to western Palm Beach County didn’t seem so attractive; Keith and Jenna sold the Orangetheory in late 2016 and looked for an opportunity closer to home.

Though neither Keith nor Jenna knew much about barbershops, the “Cheers” vibe the franchise embraces—it’s the place where everyone knows your name—appealed to them. “This business is more relational, which is in line with our personalities,” Keith says.

The 35th V’s franchise (2426 N. Federal Highway) combines handsome décor (dark woods and brick) with nostalgic touches (like the five Koken barber chairs from the 1950s and framed photographs of sports icons, which are for sale) and even adult beverages (local and national beers eventually will be offered). The men’s grooming menu is straightforward—haircuts, straight-razor shaves, facials, face massages—but it’s the genial, five-star service from V’s three full-time staffers that has customers returning.

For Jenna, whose family owned the Yankee Clipper hotel on Fort Lauderdale Beach, connecting with customers and the community (V’s already has donated to Arc Broward) helps to explain why “this doesn’t feel like work.”

“It’s more like a project we’re doing together,” she says. “It’s so much more fulfilling.”

As V’s master barber Anthony Matteo explains, the art of straight-razor shaving is all about using a light touch. How light? The 200 hours required for his certification included practice shaving—on a lathered-up balloon. “The idea,” he says, “was not to pop it.”