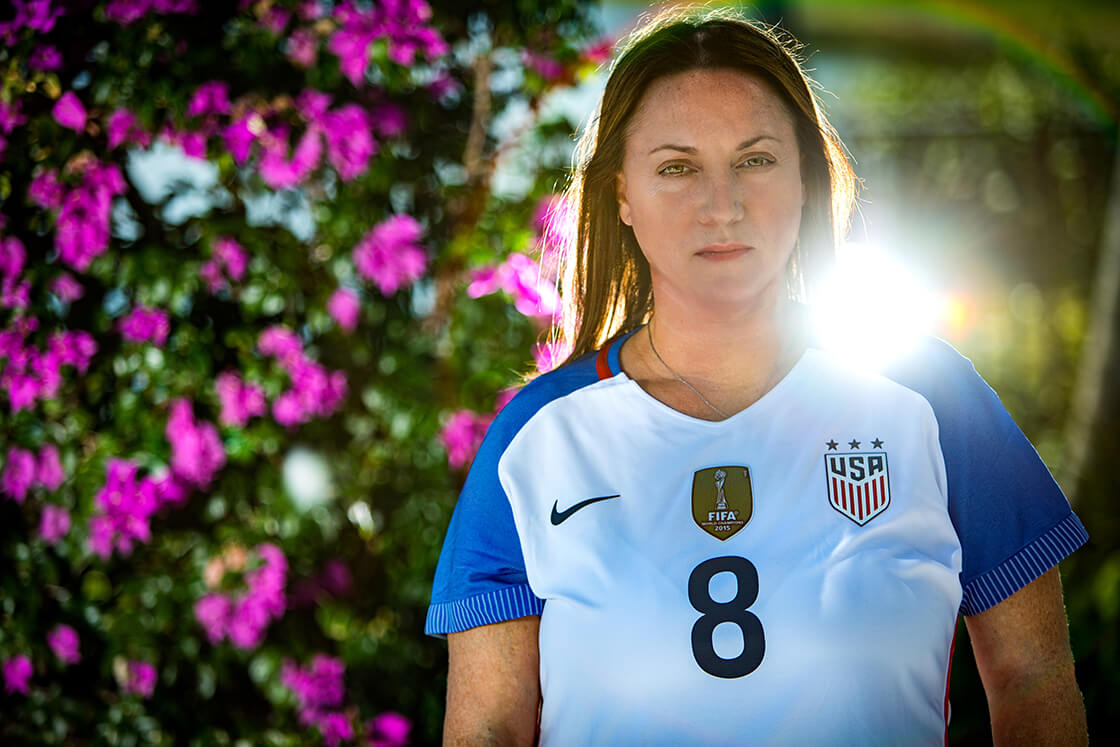 My friend sent me that text. An overwhelming sense of grief came over me. Alyssa was in trouble. I felt it with my whole body.

I threw on my shoes, took my pocketbook and ran to the car. I frantically called my husband. I must’ve called at least 10 times. He finally picked up. I screamed at him, “Something happened to Alyssa. She’s hurt. I’m going to the school.”

Traffic already was backed up at Stoneman Douglas. I parked on a sidewalk and started running to the school. There was yellow [police] tape, so I could only go so far. There were police everywhere with huge guns out, not little ones. Probably AR-15s.

My husband showed up; he was trying to calm me down, but I was freaking out. Everyone else was just kind of staring quietly. I was the only one screaming.

Alyssa’s best friend, Abby, ran from the school and initially went to Subway. From surveillance video, we know that she was inside Subway the same time as the shooter. Thank God, he didn’t hurt her. She then ran back to school over to where I was standing; her mother was next to me. I looked at Abby, and I looked at the space next to her, [expecting to see] Alyssa. Alyssa and Abby were best friends. They were always together.

It was confirmation for me that something had happened.

I ran through the yellow tape. A policeman stopped me with his big gun. I remember pushing at him, trying to get to the school. You know [former Broward deputy] Scot Peterson? His job was to engage the shooter. That was his only responsibility. And he froze. I would’ve run right into that school. I don’t care. Nothing would have gotten in my way. I would’ve taken the bullets for all those kids.

Amid all of this, I got a text from one of Alyssa’s friends who was in the room with her. She texted me that Alyssa had been shot.

[Editor’s note: Police eventually gave Lori a ride to one of the hospitals treating the wounded. Neither she nor her husband, Ilan, could find Alyssa or learn anything about her condition. They returned to the designated command center at the Fort Lauderdale Marriott Coral Springs Hotel.]

By now, there were hundreds of people at the Marriott. They eventually took us and some other parents to a separate holding area, inside a big ballroom. I remember pizza boxes piled to the ceiling, packs of bottled water, blankets from the Red Cross. We still didn’t know anything. It was around 5 in the afternoon. At one point, I went into the bathroom and started yelling my head off, asking God why he would take Alyssa.

About 10 o’clock, I turned to our rabbi, who had come to the hotel. I asked him to start planning the funeral arrangements for Alyssa. In the Jewish religion, the next day you bury your child. He said, “No, try to have hope.” I looked at him and I was like, “You need to do this for me.” He said, “OK. I got this.”

It wasn’t until 2:30 in the morning that the FBI called us into a room and told us they believed that Alyssa was dead. I don’t know if throwing in the word “believed” was their nice way to ease the shock, but it still didn’t seem final.

The next morning, around 7, I drove to the outskirt of the Everglades, near our house. I felt like this was the closest point that I could get to God, and I asked why he took Alyssa. Suddenly, there was this big beam of sunlight. I felt like that was his way of explaining to me.

I picked up my mom, and we drove 45 minutes to the medical examiner’s office. No one asked me to come, no one told me I could go there. I just went. We asked to see Alyssa. They said no, but they did agree to give me a picture. A few minutes later, they came back with this 8 by 10 photo of her face. That was the first time that I knew, with 100 percent confirmation, that Alyssa was dead.

Afterward, I had to sign paperwork to release her body to the synagogue where she would be buried. My husband and I went to the funeral home and spent two hours making the arrangements.

And then we went to Pine Trails Park for a memorial.

There were all these newscasters there. I went up to the first one I saw and told her I had something to say. She tossed her hair and kind of brushed me off. I saw another newscaster and told him the exact same thing. He handed me a microphone and told me I was on in one minute. That’s when I went off. [Editor’s note: The footage of Lori, in tears, pleading for President Trump to do something to ensure school safety, quickly went viral].

People accused me of seeking out CNN. I had no clue that guy was from CNN. He could have been from anywhere. I didn’t care. After everything we had been through the past 24 hours, I needed to talk. I was [angry].

Earlier, before we made the funeral arrangements, we finally saw Alyssa’s body. Alyssa had been shot 10 times. Hers was the first classroom to be hit. The shooter shot out the glass; Alyssa’s desk was straight in [his] line of view. He went down the hall—and then he came back and shot her again.

She was shot in the heart, in the spine, in the hand, in the left femoral artery. Had she somehow survived, she would have been paralyzed. The FBI had alluded to the fact that [part of] Alyssa’s face had been blown off. One of the bullets had grazed her in the back of the head, but it already was stitched up. When we saw her face, she was beautiful.

I remember trying to look and see [all the places] he shot her, where the bullet holes were. I remember feeling how cold she was to the touch. I took her hand and started rubbing it to warm her body, like I was trying to bring her back to life.

The next day, we buried Alyssa. I kept my hand on her coffin as it was being lowered into the ground. I wanted to keep touching my daughter for as long as I could—until I couldn’t reach any further.