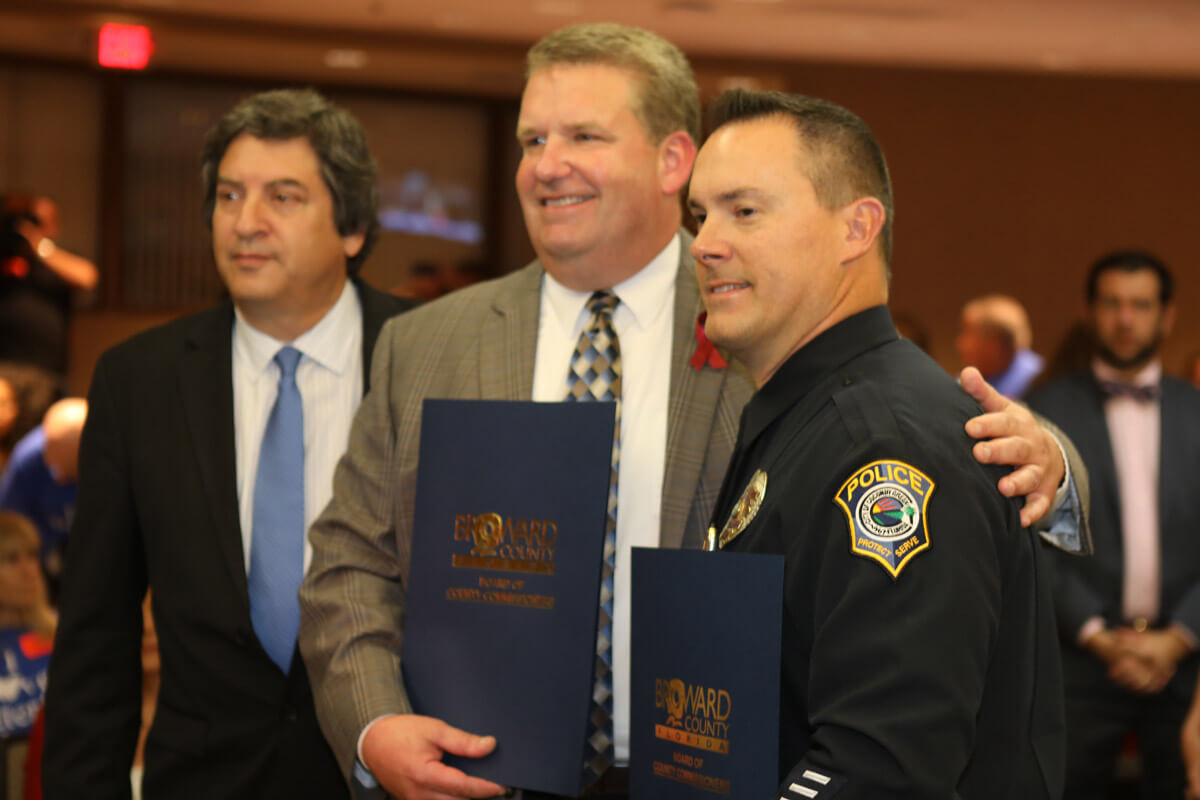 Less than 24 hours after the shooting at Marjory Stoneman Douglas High, Coconut Creek police officer Michael Leonard became the face of Broward County’s first responders when he stood in front of the nation’s news cameras and recounted how he apprehended the person responsible for one of the deadliest school shootings in American history.

Since then, Leonard, who has been with the department for 17 years, has been honored for his actions. He admits that he’s still grappling with the tragedy.

“The devastation—the loss—it’s so hard to process,” says Leonard, who apprehended the shooter in Coral Springs. “My heart just goes out to the families; [you wonder,] ‘How are they able to process this?’”

Leonard, who lives in Coconut Creek with his wife, 13-year-old daughter and 18-year-old son, opens up about Feb. 14 and the aftermath.

Processing that day: I’m still dealing with it—the process started moments after I released him into someone else’s custody. I just told [the other officers], “Hey, I need a few minutes.” I sat in [my truck], turned the air on and cooled off. It kind of started sinking in at that moment because the radio was still going. The chaos was still continuing. Officers were still clearing the building. … I wanted to speak to my wife. She works at a school close to Douglas. … At that point, you want to talk to somebody. I wanted to let her know that I was OK.

Coming home: I didn’t get home until after midnight, but they were all waiting up for me. They just wanted a big hug from their dad. It was a good feeling to get home. I was putting my daughter to sleep that night—I tuck her in every night—and it was so heavy. It was so upsetting just knowing that there were parents that weren’t able to put their children to sleep that night or give them a hug or kiss. It was just tough. It still gets me. I’m not too big to cry, but I’ve cried a lot more than I ever have lately in the last month.

Hail to the chief: It was an honor meeting [President Trump] and the first lady. They seemed so personable. … I felt that he was genuine about wanting to help find some answers to gun violence. … Some kind of change needs to be made. … I don’t know what it would be, but I think if we could all put our differences aside and try to come up with the best policy that’ll help us end any kind of school tragedies, I think we’ll make some progress. That’s what I hope.

On seeing students return: It was very emotional. It was a really good feeling to see the students come back. It was a sign of strength. You could just see that there was a bond between them. I felt they’re coming back strong. I sensed that. It was good to see the kids walking in with their heads held high and see the support of all the officers. … A couple parents recognized me from the news conference. It was a bonding time for all of us. You could tell that was something that was needed for the healing process.

Everyday heroes: If there’s any kind of recognition coming my way, I want to make sure [it’s on] everyone because we’re a big team. I’m nothing without my brothers and sisters. We are heroes because of what we do. We do it day in and day out, and we’re not looking for any extra recognition. Occasionally, it does come and it’s nice to be appreciated and recognized, but I would do it with or without [that]. I didn’t know any of this was coming. I did it because it was the right thing to do. For most officers, that’s what we live for.