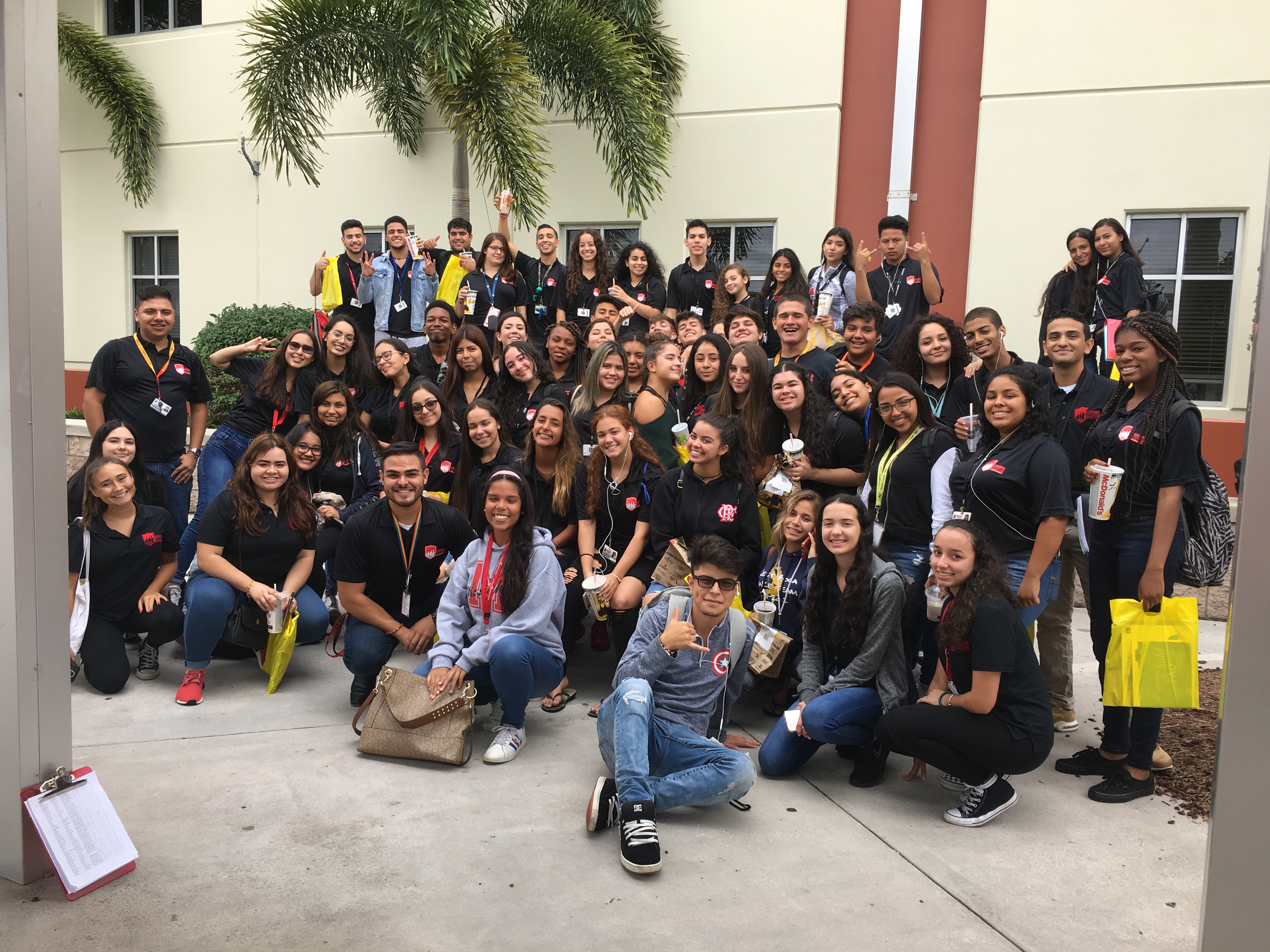 It’s Wednesday morning at Liberty Elementary School on the Margate-Coconut Creek border, and fifth-grade teacher Keri Carrow is reviewing a science lesson with her students.

Next to one fifth-grader is someone you usually wouldn’t see in a fifth-grade class: Stephanie Vargas, a senior from Monarch High School. While the class takes the science test on laptops, Vargas sits at his side and helps him understand the questions, pointing to the screen and asking “Tú sabes lo que esta diciendo aqui?” (“Do you know what it says here?”) and “Te recuerdas que significa esta palabra?” (“Do you remember what this word means?”)

The fifth-grader is an English Language Learner student, having moved to the States from Cuba about two months ago. With Vargas’ help, he is learning fast, as evidenced by his A on the test.

Around the school that morning, Vargas’ 33 classmates also are meeting with young students as part of their Latinos in Action class. Community service, such as mentoring, is a hallmark of LIA, a leadership program founded in 2001 in Utah, which is now in more than 200 schools across the country. Monarch’s members mentor students at Liberty and Margate Elementary, most of whom are ELL students.

“We get to experience teaching them and having a mentee we can impact—change their lives and help them improve,” says Vargas, who is of Dominican and Mexican heritage. “When I was little, I didn’t speak English, so if I would have had that person, that would have been really nice.”

The appreciation is mutual. Carrow, says her three students being mentored “light up” when the LIA students arrive.

“Someone else is understanding exactly where they’re coming from or has a similar story of being able to know what it’s like to be from another country … Having [the mentors] there gives them the sense that they’re not alone. You have someone else to relate to,” Carrow says. “Having that bond, especially with an older teenager, makes them feel important.”

“I’ve seen growth with these kids, socially, that’s phenomenal,” Machado says. “Kids who are usually very shy and don’t want to talk, just having that avenue to be a role model for their mentee makes them more social, and they come to me with stories and they’re excited.”

“Excited” is also the right word to describe the energy in Machado’s classroom that Friday. He starts class with questions for a journal entry and discussion, asking students to write about the importance of having a good GPA and how it will affect their college careers and future incomes.

This is the other component of LIA: preparing students for their futures. The curriculum emphasizes scholarship and college searches, financial literacy, character development and information on educational resources that help them enter colleges and vocational schools. They also hear from guest speakers. Describing the class, Machado echoes words from one guest speaker: Juan Garcia, a senior director at ACT Center for Equity in Learning.

“It’s not about an achievement gap. It’s about an opportunity gap—and showing them, ‘Hey, these opportunities exist. Let’s get to them,’” Machado says.

For now, there are opportunities in the classroom. To accomplish their goals, each class has six committees (including social, service, professional and fundraising) headed by a vice president, chosen by their peers. Overseeing the vice presidents is a class president.

“Having them work in committees really helps develop leadership skills that they’re going to need later on,” Machado says. “That’s why I’m so happy to be a teacher of this course. Because I see them grow not just academically … but in other areas that are needed in this life to succeed.”

This growth is paralleled in the number of LIA students. Now in its third year, word has spread around Monarch, spurring Machado’s goal to increase the number of classes from two to four next year. As for the students’ goals, LIA has set their paths, especially for seniors such as Vargas.

“I feel like before this class, Latinos were kind of hidden; they didn’t really do anything in the school,” says Vargas, the current president of her class. “Latinos in Action came, and we were able to expose ourselves in a good way—and bring a message that Latinos are here and want to empower the community.”

We asked a few LIA students to share what they’ve learned:

He [Machado] has taught us that when we want to reach a goal, it shouldn’t matter to us what other people think. For example, if you want to be a soccer player and someone says, “You can’t,” that shouldn’t affect us in achieving our dreams … [we have to] just keep going and reach our goals. (Translated from Spanish)

“One thing he [Machado] said this year is, it’s good to have amazing grades, but it’s the mark you leave on people in your life that they’ll remember you by.”

“It’s heartwarming when [my mentee] is able to read a whole sentence on his own without having me help him pronounce the words. Seeing him doing better and progressing in his work makes me feel good because I’m making a change.”

“I kind of see myself in the kid that I’m teaching. It’s kind of like my son, basically. The things that I wasn’t provided with, I’m teaching him now so life can be easier [for him].”

“I think [tutoring] is empowering because [I had to repeat fifth grade] because I didn’t know English. So, mentoring a second-grader—and showing him, ‘Don’t get frustrated. You’ll do it. You’ll pass’ and ‘Don’t make the same mistake I did’—just feels good. [It shows] the younger kids that they have people who will look out for them and help them.”

Monarch’s LIA was founded by former Monarch teacher Alexis Pillsbury, who won the organization’s Teacher of the Year Award at its Florida leadership conference in March. “It is a truly amazing program,” she says. “I keep in touch with many of my former students, who I love very much.”

LIA started mentoring at Tradewinds Elementary and came to Liberty in the 2017-18 year through math coach, Elizabeth Valentino. She heard LIA founder José Enriquez speak at a Florida Association of School Administrators conference. There, she met Monarch’s principal, James Neer, who connected her with Pillsbury. Valentino oversees the program with Liberty’s literacy coach, Lauren Bishop; both are happy to see the confidence Liberty students have gained through mentorship.

“It motivates them that another person cares about their educational success,” Valentino says.