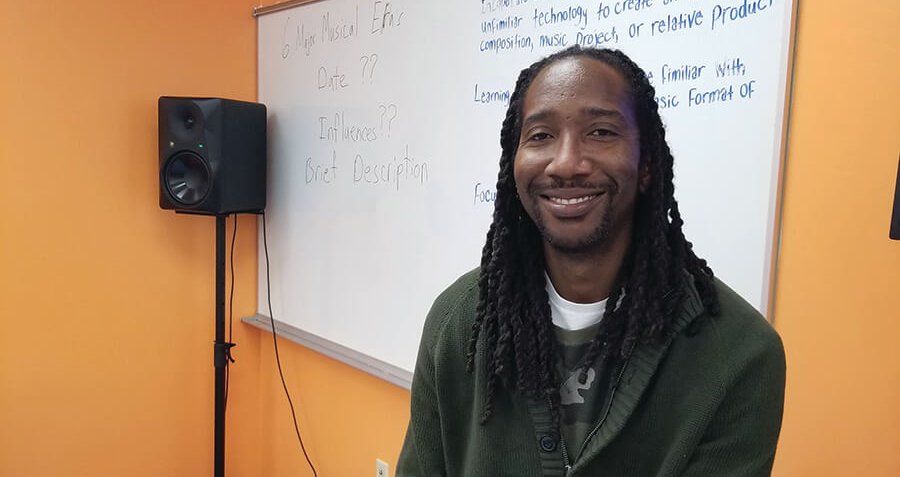 When Kyle Woodard started teaching music last year at Dave Thomas Education Center, one of the first things he did was paint the room a bright orange, which he believes enlivens students when they come in for class.

And on a recent day at the Coconut Creek school, it was obviously so. On a TV connected to his iPad, Woodard shows keyboarding students sheet music.

Other students use the computer applications Garage Band and Studio One to mix music and work on presentations on music theory. The bright color lifts their spirits, but it’s the technology, Woodard says, that keeps the students’ attention.

“Everything they see is in 1080p,” says Woodard, referring to the high-resolution screens they use in their daily lives. “It’s easier to bring their education that way—the way this new generation seems to learn.”

Woodard’s experience as both a musician and teacher who isn’t afraid to try something new makes him “a gem,” for Tracy Lockhart-Talley, the principal at the nontraditional school where middle and high school students who have fallen behind get a chance to catch up on classes. Lockhart-Tally sees the budding music program as a way to help the school reach its goal of allowing students to explore career paths.

With money from the school board’s SMART Initiative—an $800 million bond approved by voters in 2014 that supports school improvements in safety, music, art, athletics, renovations and technology—Dave Thomas bought keyboards, computers and more to support their mission to bring music to their students. The devices were installed in November.

“They’re excited about it,” Lockhart-Talley says of the middle schoolers taking the music elective. “They want to go in and have fun. The ones who don’t have the program, I sometimes [catch them in the room] and say, ‘What are you doing here? You don’t have this class.’ ”

But Woodard does what he can to accommodate high school students and others not in the class. He’s used his free planning period to form a small chorus, and he recently started Freestyle Fridays, during which students perform their songs during lunchtime.

Though in his own words it’s all part of “making it up as [he goes],” Woodard is working toward a program that gives students a foundation from which to continue studying music.

“Music, 40 or 50 years ago, was traditional,” says Woodard, who studied music at Bethune-Cookman University. “Now you go to a computer and you can create the same music. That’s what I’m trying to work toward: making future musicians [who] will make music evolve into wherever it’s going.”