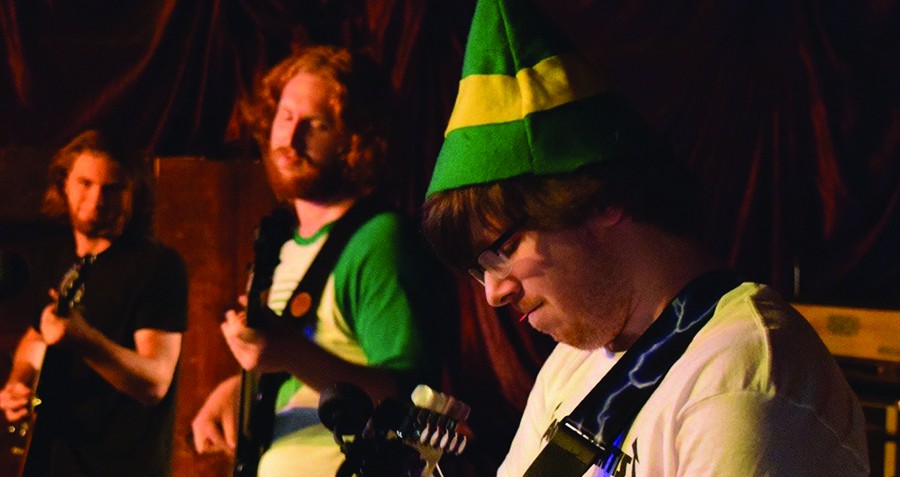 On the Road Again

Before he was tearing up stages in Nashville and London, guitarist Joey Frevola was shredding on “Guitar Hero” in Coconut Creek.

The guitar-simulating video game offered a glimpse into the world of classic rock. As a 12-year-old, whenever he heard a cool song on the game, he would put down the plastic instrument and learn to play it on a real one. It often led to exploring the artist’s repertoire for more. “YYZ,” for one, turned the Canadian rock trio Rush into perhaps his biggest musical influence.

Now, at 23, his iTunes library holds 33 days’ worth of music—including his own. This month, Frevola is touring the United States with Kyros, the London-based alternative/progressive rock band he joined about three years ago. The final stop is in Fort Lauderdale at the Cash Only Bar.

“I’m excited to show everyone, family and all my friends I’ve had from back in the day, what I’ve been doing,” he says. “Obviously, high-school Joey and post-college Joey are not the same thing.”

Frevola majored in guitar composition and audio engineering at Belmont University in Nashville. He briefly moved to London after auditioning for Kyros over the internet. The band has a range of influences, from 1980s pop (such as Depeche Mode and Kate Bush) to alternative rock (à la Muse and Porcupine Tree). Kyros—with Frevola and Sam Higgins on guitar, Adam Warne handling lead vocals and keyboards, Peter Episcopo plucking the bass and Robin Johnson on drums—has performed at festivals in the United Kingdom, Germany and the United States. The band also has opened for such popular acts as Marillion, Anathema and Spock’s Beard.

After his visa expired, Frevola made Music City his home base and commutes across the pond when needed. He has plenty to keep him busy: His second band, Edge of Reality, is an incarnation of a group he started at Calvary Christian Academy. The current version is opening for Kyros at Cash Only—a double shift for Frevola.

The goal was always to join a band and do the rock star thing, he says. But there’s plenty he wants to do next. Currently, he’s composing a rock opera, a “solo album of sorts.” He also hopes to pursue film scoring.

“I just love film in general and could easily see myself getting into directing someday,” he says. “I come up with story concepts all the time—most of which become songs, but others are logged as movie ideas.”

What guitar do you play?

Do you play any other instruments?

I dabble in drums, piano and bass. Lately, I’ve been itching to try learning the violin because I just love the way it sounds; I use them all the time in my own compositions.

How do you prepare for a show?

Honestly, I don’t really do anything. I barely even warm up most of the time. I find that playing well is mostly about getting your head in the right place, so you’ll often see me just pacing around in my own world.

What is your favorite band?

This is a tough question for me, and I can answer it in two ways. If I look at it from the angle of “what’s the single most influential band, without whom I would not be the person/musician I am?” that would have to be Dream Theater. Currently though, my favorite band is The Dear Hunter. They just seem to hit every musical button for me at the moment, but I listen to quite a lot of different stuff these days, so I can’t guarantee they’ll be my favorite forever.

What is your favorite album?

“Metropolis Part 2: Scenes From a Memory” by Dream Theater. It’s literally the only time I’ve ever cried over the sheer brilliance of what I was hearing.

I am related to Bruce Springsteen, though I can never remember exactly how. He’s a distant cousin of some sort.