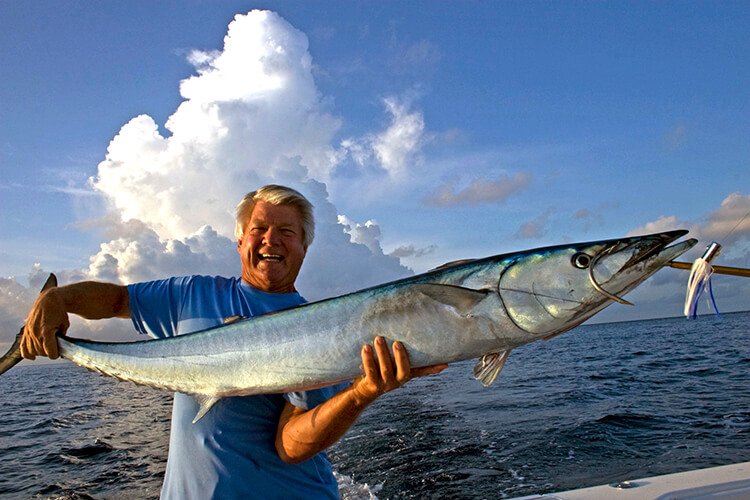 Though he’s about to host a tournament that promises the largest guaranteed purse in sportfishing history, Jimmy Johnson admits that his own rod-and-reel pursuits lack the competitive intensity that defined his championship career as a college and professional football coach.

That might surprise those who remember his 1987 Miami Hurricanes team outscoring opponents 412-125 en route to the national championship—or his Dallas Cowboys teams of the early 1990s that crushed the Buffalo Bills in consecutive Super Bowls. But don’t confuse the Jimmy Johnson who, looking back on a 58-7 win by the Hurricanes over Notre Dame in 1985, recently quipped, “It wasn’t our doing that ran up the score; it was their poor play,” with the man who, most mornings, finds the bliss in anchoring one of his two twin-engine diesel boats offshore in the Florida Keys and dropping several lines in the water.

“Fishing, for me, is 90 percent relaxation and 10 percent excitement,” says Johnson, who will host the seventh annual Quest for the Ring event (March 7-10) in partnership with Seminole Hard Rock Hotel & Casino. “Honestly, I enjoy going out by myself most of the time. I’ll put the boat on auto-pilot, put five or six lines out, sit back and have a cold beer.

Don’t expect participants in the National Billfish Competition, the Friday and Saturday highlight of Quest for the Ring, to be nearly as nonchalant about their catches (or lack thereof) in the waters off of Key Largo. Anglers in categories for weight, catch and release, and overall will vie for a record $1.5 million purse.

Johnson credits Tod Roy, one of the partners in CI Management Group, with fostering the Hard Rock connection, and sending the tournament and its prize money into a different stratosphere. Still, there’s more to the Quest than hooks and lures.

“In my opinion, it’s the best fishing tournament in the entire country because the parties are unbelievable,” says Johnson, who hosts those parties at his Big Chill restaurant in Key Largo. “For a lot of those hardcore fishermen, it’s always more about the tournament and less about the entertainment and food. But this one has everything. These fishermen come to get a ring, but they leave feeling like the experience was over the top.”

In his unofficial role as ambassador of the Keys, Johnson understands that this year’s event carries with it more than just the hopes of participants in the competition. It’s a chance for the region—which relies on tourism revenue for 60 percent of its overall economy, according to Florida Keys officials—to roll out the welcome mat for those hesitant, in the aftermath of Hurricane Irma, to venture into the southernmost stretch of the state.

Johnson, 74, understands as well as any local resident the emotional scars left by the Category 4 storm and its 130-mph winds. As of late January, work was still being done on the oceanfront home he owns in Tavernier on Key Largo with his wife of 18 years, Rhonda. When the hurricane hit, Johnson was in Los Angeles for his football-season gig as a studio analyst for “Fox NFL Sunday.” He and Rhonda returned to their six-acre property on that Wednesday.

“We had a friend clear out our driveway, that was the only way we could get to the house,” Johnson says. “There was 2 feet of sand blocking the front door, the docks were completely destroyed, all the bottom floors were flooded by the 7-foot surge.

“My wife looked at everything and just started to cry. We spent 20 years building this place the way we wanted to build it. It was devastating. … I’m fortunate enough that I can rebuild. I can afford it. A lot of people in the Keys didn’t have that luxury.”

As relief and rescue workers from all over the country continued to clear debris and repair power lines throughout September, Johnson already was thinking about the bigger picture. He talked up his beloved Keys whenever possible—on the radio, in interviews—and encouraged travelers to visit the area and frequent the businesses that had reopened.

“So many people down here rely on tourism for their [day-to-day] existence,” Johnson says. “Fishing boat captains, charter boat businesses, resorts, restaurants. Even though we were rebuilding—and some places were closed—we still needed people to come down and support the area because of the livelihoods at stake. That’s why [Quest for the Ring] is such a positive event; it brings people back into the Keys.

“As far as I’m concerned, it’s still paradise down here.”

It’s been that way for Johnson since he purchased the Tavernier home during his final years as head coach of the Miami Dolphins. He retired from coaching following the 1999 season, his fourth with the Dolphins. By then, his college record included two undefeated regular seasons and a national title as coach of the Hurricanes; his pro résumé, meanwhile, touted one of the great rebuilding efforts in NFL history, using shrewd trades and draft picks of future Hall of Famers (like quarterback Troy Aikman and running back Emmitt Smith) to turn the Dallas Cowboys from a 1-15 laughingstock to back-to-back Super Bowl champs in just three seasons.

While some mused that Johnson would tire of television and eventually return to the sidelines, the thought, he says, never has crossed his mind.

“I was ready to retire,” says Johnson, whose competitive fire (and love for the show) did lead to a stint on CBS’s “Survivor” back in 2010. “Different coaches handle it different ways. Some can delegate. Coaching for me was around the clock, 12 months out of the year. I really didn’t spend time with my family. It was time.

“Now, not only can I enjoy my life in the Keys, but ‘Fox NFL Sunday’ allows me to scratch my little itch for football.”

It’s in the Keys where Johnson fell in love with deep-sea fishing. That wasn’t the case at the University of Miami; in those days, Johnson was all about scuba diving in local waters and in the Bahamas. But after retiring, he rediscovered his passion for the sport that his father introduced to him as a child in Port Arthur, Texas. Johnson says he takes his boat out before daylight and typically is back by noon.

“Since I fish offshore, I’m going for big fish—and I’ve actually caught five blue marlin fishing alone,” Johnson says. “It takes more than 2½ hours to bring one of those in. I have to run the boat, I have to get the other lines in. And then I have to fight the marlin. … Normally, I would release a blue marlin. But two of them died during the fight, so I went ahead and brought those in, smoked them and gave them to friends. I don’t mount any fish. But since I fish alone, when I catch a big one, I’ll have my wife come out and take a picture of it so I can document it.

“She always gives me grief. She goes, ‘Just use a picture from years past. They all look the same.’ ”

Asked if he’ll cast his line with the professionals at Quest for the Ring, Johnson says those days are over.

“I fished a few times in the beginning. But if I put in eight or nine hours of fishing, I’m not nearly as energetic during the party.”

Quest for the Ring

What: Host Jimmy Johnson, in partnership with Seminole Hard Rock Hotel & Casino, welcomes top anglers from all over the country to compete for the largest purse in sportfishing history—$1.5 million. Festivities include a Wednesday kickoff celebration at Johnson’s Big Chill restaurant; a Thursday celebrity pro-am event and Ring of Honor champions dinner; and the two-day National Billfish Championship.

The early 1960s at Thomas Jefferson High School in Port Arthur, Texas, produced more than just a future Super Bowl-winning football coach. One year before Jimmy Johnson graduated (1961), Janis Lyn Joplin earned her diploma from the school. By the end of the decade, the woman who charted with “Me and Bobby McGee,” “Piece of My Heart,” and “Mercedes Benz” was one of the era’s biggest rock stars.

But long before she played the Monterey Pop Festival and Woodstock, Joplin sat behind Johnson in history class—and put up with some good-natured teasing.

“We used to kid her all the time,” Johnson says of Joplin, who died of an overdose at age 27 in 1970. “She wore those black leotards, and we heard talk about her smoking marijuana. So, we called her ‘Beat Weeds.’ I gave her that nickname. ‘Beat’ was for ‘beatnik.’ And ‘Weeds,’ well, you can read between the lines to figure that out.”

Johnson says he knew Joplin was in a band that played “across the river” in Louisiana. Still, he was “very surprised that she became as famous as she did.”