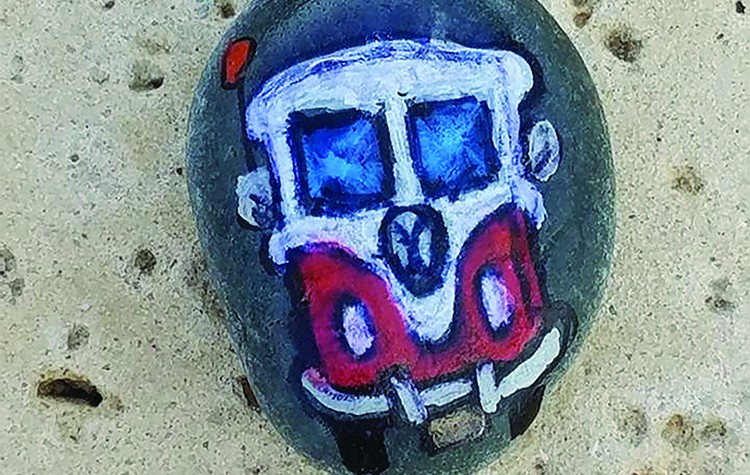 When her 8-year-old son picked up a colorfully painted rock on the way to his weekly tennis lesson in Coral Springs, she told him to put it back. Less than an hour later, the boy found another rock with the words “Coral Springs Rocks” and a link to a Facebook group painted on the back. His mother reluctantly let him keep the hidden treasure and visited the Facebook group.

Judy Pelaez Steiner quickly realized the findings were no coincidence—her son, Tristan, had stumbled upon a citywide project dedicated to making community members smile. Touched by the project, Steiner decided she would do the same with her own community of Coconut Creek.

Steiner created the “Coconut Creek Rocks” Facebook page, which has gained over 350 members since it began in May. Residents paint rocks with positive sayings or beautiful designs and hide them around the community. People are encouraged to share a photo of their rock findings on the page and then decorate their own rocks to hide.

“If you find a rock, you leave a rock—someone made you smile, so share a smile with someone else,” Steiner says. “Even for a second, if it makes someone smile, it’s one good deed you can do for your community.”

Steiner headed out to the local craft store and bought an assortment of paints, Sharpie markers and sealer, and let creativity bloom. She saw the activity as a way to get her kids outside.

“Even my 2-year-old, Jaxson, gets involved,” Steiner says. “It’s not a work of art, but he gets a paintbrush and starts painting a rock—it’s his little contribution to society.”

When her family got involved in the project, Steiner had never imagined how far it would take off. Rocks from Coconut Creek have been found across the country in Colorado and New York and across the seas in France and Italy.

She wants to spread this trend deep into Creek. After meeting with Principal Kathy Good of Coconut Creek Elementary School (where Tristan attends), Steiner has convinced the faculty to get the students involved and have them paint rocks to display throughout the school.

“Kids go through so much that we don’t know about,” says Steiner, a social worker. “If a child is acting out, it can help them calm down by giving them a rock and paints and letting them go to town. Allowing them to express themselves builds confidence that they need at an early age.”

Steiner is also taking the activity beyond Creek’s borders; she will spend a week with her two boys in Georgia. The first thing packed in her suitcase is a basket of painted Coconut Creek rocks.