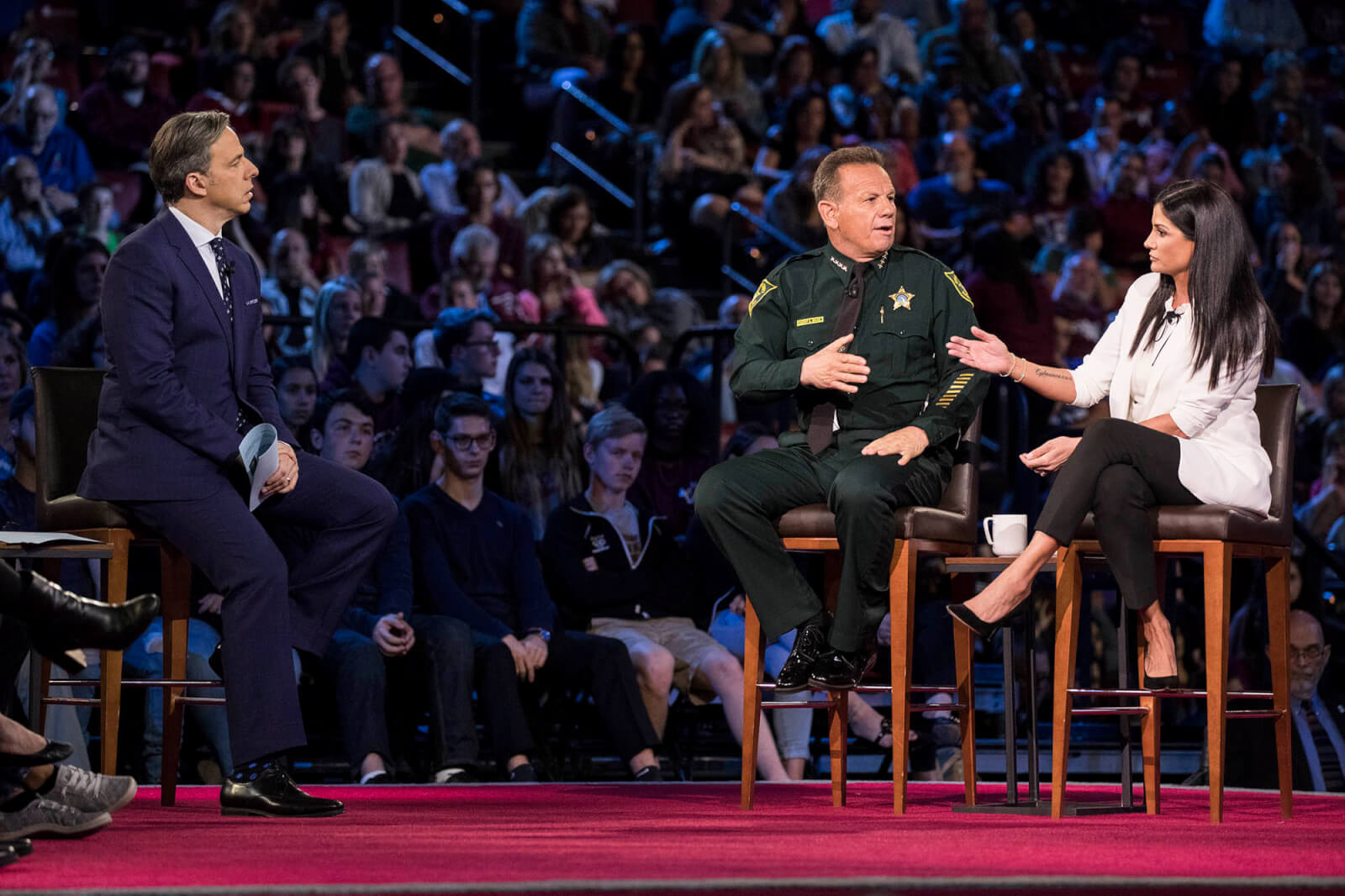 From the moment he first addressed reporters at Marjory Stoneman Douglas on Feb. 14, Scott Israel has been an integral and often-compelling figure in the continuing storyline connected to the deadliest high school shooting in U.S. history.

At a CNN-organized town hall meeting a week after the shooting, the Broward County sheriff drew several standing ovations, including one for his suggestion to ban assault rifles. A week later, questions about his department’s handling of red flags before the incident and protocol during it had some critics calling for his job.

Lifestyle felt it was important to include Israel’s perspective in an April issue devoted to what happened at MSD. Through his executive assistant, M.J. Mastrodonato, we submitted questions covering a range of topics, including the controversies for which he and his department have been under fire. On March 9, Israel answered every one of the questions via email.

Before the CNN Town Hall, you spoke to attendees with great emotion about Feb. 14—including an acknowledgement that “my generation blew it.” Can you elaborate on that?

My generation failed to do enough when it comes to gun safety. Instead of working together to find common-sense gun-safety solutions, including a stronger and uniform national background check system, better regulation of certain types of guns such as the AR-15, and increased funding for mental health services, we ultimately accomplished little.

But there is hope. This hope lies in the ideals and activism of this young generation, including the passionate students from Marjory Stoneman Douglas High School, who I have no doubt will be successful in starting bipartisan dialogues and bringing about change.

Are you optimistic that the movement led by the MSD students will make a difference?

The better question is how big a difference will they make, because the bold actions of these eloquent and passionate teenagers are already leading to meaningful changes.

It’s no surprise to me that it is Douglas students who are leading the way. As a former longtime Parkland resident, father of three former students, and a volunteer assistant football coach for the Eagles, I know very well what these students are capable of accomplishing.

Thanks to the leadership of these students and their families, we are seeing movement toward gun reform in Florida. While it ultimately might not produce the sweeping reforms they seek, they have brought about important first steps that will help save lives because of their courageous efforts.

Gov. Rick Scott signed a gun legislation bill into law. What’s your reaction to its provisions, including the idea of arming certain school personnel?

Arming teachers is not a good idea. The overwhelming majority of teachers share this concern over this risky concept. Teachers should teach and not be asked to bear—and with much less training than police—the heavy responsibility for becoming the school’s first line of defense against threats. If schools want a greater armed presence, they should consider adding more school resource officers.

From the perspective of law enforcement, what kind of legislation—outside of banning assault weapons—would have the most impact for officers dealing with the issues that have emerged in the wake of the Parkland shooting?

There is no simple solution for this very difficult problem. Yet there are several measures that could help prevent future attacks.

First, and most importantly, is creating violent threat restraining orders because they will empower the justice system to prohibit the sale or possession of guns to violent individuals [or people] deemed to be mentally ill. Another reform is to strengthen the Baker Act so that those who are involuntarily committed to mental health institutions have their firearms temporarily removed from their possession—and [then] not permit them to reacquire those weapons until a court approves. Finally, threats of violence made online are not always arrestable offenses. I support the efforts of law enforcement leaders around the state to urge legislators to close a loophole in Florida law so that police can make an arrest when broader online threats are made.

Fortunately, it appears the Florida Legislature [adopted nearly] all of these important reforms [to state law]. More can be done and should be done, but this year’s actions in Tallahassee are a small-yet-promising start on the road to a safer Florida.

Outside of Florida, a uniform national system of mandatory background checks should be implemented to stop criminals and the mentally ill from acquiring guns. This will take bipartisan consensus in Washington to make this a reality.

Internally, will tactical or procedural measures be changed based on what happened at MSD?

Prior to the attack, BSO [the Broward County sheriff’s office] already adopted the national policing “best practices” for active shooter situations. Since 2014, our deputies [have] received training in these tactics and procedures. However, law enforcement always learns more from each new incident. Once the ongoing independent investigations are completed, BSO will review and incorporate suggested reforms into policies and procedures as appropriate as we move forward.

Your office is under intense scrutiny right now on a couple of fronts. Regarding the red flags connected to the confessed shooter: How much of that criticism is warranted?

There is an internal investigation by BSO officials, as well as the independent investigation by the Florida Department of Law Enforcement [FDLE], which I support. Additionally, the Florida House of Representatives is reviewing the actions prior to Feb. 14 by BSO, the Palm Beach County Sheriff’s Office, Broward [County Public] Schools, the Florida Department of Children and Families, and others; and Congress is looking into the actions of the FBI. I have ordered the entire BSO to cooperate fully with each investigation with transparency and honesty, and the public will be able to see all the findings.

Given the information available to you as of today, what can you share with readers about the controversies involving the call for a perimeter to be set up—and the decision by former deputy Scot Peterson not to enter the school?

BSO has now released to the public a detailed timeline and the audio recordings of the police radio and dispatch communications. What we now know is that the shooting had stopped when Capt. Jan Jordan asked if a perimeter had been established. She asked that question following transmissions by law enforcement on scene advising that there were victims throughout the campus and also at the entrance of Westglades Middle School. A perimeter is a secondary task that would be appropriate to apprehend a fleeing suspect, stop him from entering a neighboring middle school, and prevent non-first responders from coming on school property while it was on lockdown.

Are there any misconceptions about how events were handled on Feb. 14 that you’d like to address?

There are several claims being reported that have been out of context, misreported or are entirely fictional. Many were reported as vague, unsourced rumors. That is precisely why we published the bsofactcheck.org page to assist the media and public in understanding the facts. The site links to audio files and key source documents in the interests of true transparency.

It’s been suggested that part of backlash against you is politically motivated in an effort to muddy the waters. How do you respond to that?

I have a responsibility to keep the 1.9 million residents of Broward County safe. I would rather focus on that responsibility and focus on taking steps to prevent this kind of tragedy from ever happening again, instead of worrying about why some people may take issue with me, my views or this agency.

What do you say to critics who think you should resign?

No one expects more from our 5,400 BSO public servants than I do. We hold our employees to the highest standards of transparency and accountability, just as I hold myself to the same standards. We will wait for the independent investigation findings, correct what we may have done wrong and improve upon what we got right, so that BSO will be better in the future.

How has the shooting and its aftermath affected you, personally?

It has been devastating. It was just a couple years ago that my own triplets, Blake, Brett and Blair, were students at Marjory Stoneman Douglas. I coached the Eagles’ football team with Coach [Aaron] Feis. Parkland was my home for many years. I walked through [the Freshman Building] that afternoon and saw the horrible devastation firsthand, and what I saw will be with me forever.

Douglas and the proud community it serves will never be the same. I cannot stand in the shoes of those families that lost children and feel the devastating loss they feel, but I share the community’s personal pain of this heartbreak. And I stand in solidarity with the survivors and the community in their search for answers, accountability and ways to move forward with positive solutions.