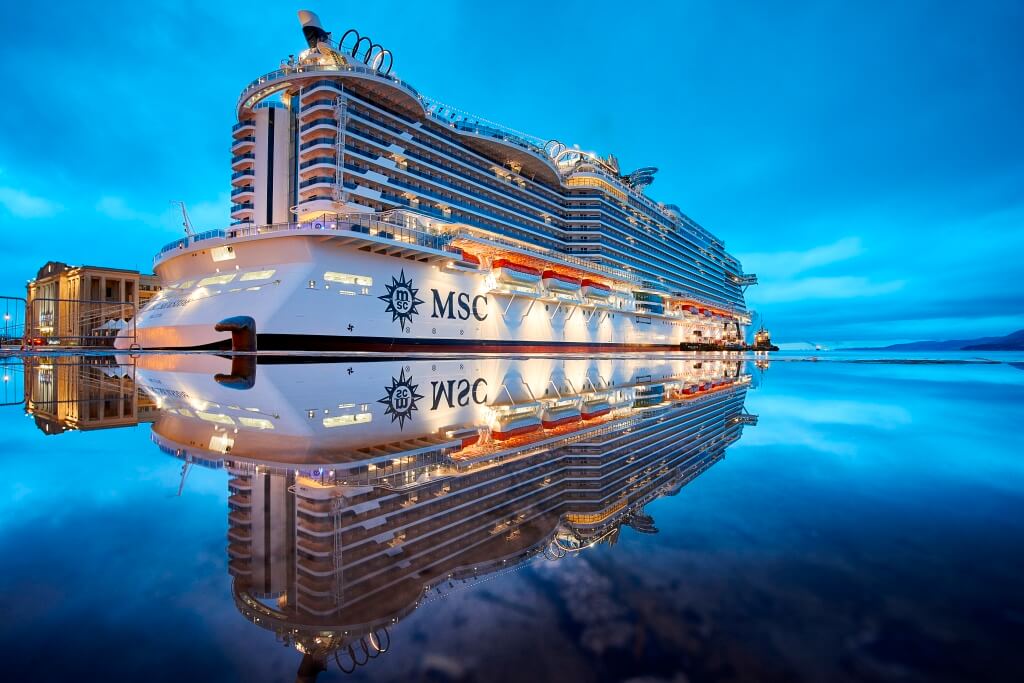 The plan was to stay on the MSC Seaside for two nights. On the second night aboard the ship, we’d drift to sea, but return to the dock to disembark as the sun was rising.

Eventually, MSC Seaside, “the ship that follows the sun,” will leave its homeport of Miami to destinations such as Nassau, Bahamas; Ocho Rios, Jamaica; George Town, Cayman Islands; and Cozumel, Mexico. But, during its star-studded honorary weekend Dec. 21–23, when it officially was named in a ceremony by a series of MSC dignitaries and its godmother, the forever-glamorous Italian actress Sophia Loren—the event also featured Mario Lopez as emcee and performances by Andrea Bocelli and Ricky Martin—we didn’t need to go anywhere. There was plenty to do right where we were.

MSC Seaside is the new flagship in the MSC Cruises fleet, the first of the Seaside generation. The ship, which has roots in Switzerland, was designed with its new home in mind, drawing inspiration from the beach condos that line Miami’s shore. The hope was that, even on a 1,060-foot vessel that sits 236 feet high, guests would feel close to the water. It was accomplished with details like the two glass-floored catwalks, which guests lined up to strut across—some not without a push from their companions—gazing down at the deck several floors below while miraculously not spilling their Malibu rum welcome cocktails.

Those are a cakewalk compared to the 131-foot high “Bridge of Sighs,” a single glass-bottomed path on deck 16, leading out to the ocean. For those not ready to go out on the ledge, the waterfront boardwalk wrapping around the ship was designed with a focus on width to make room for al fresco dining and drinking, inhaling the sea breeze and admiring the ocean view, which in our case featured the Miami skyline. The whole scene comes together from the panoramic glass elevators, which connect the two main pool areas, and two 344-foot long zip lines that grace the top of the ship.

Guest zooming down the zip line over the MSC Seaside.

The zip line is found on the same deck as the multi-story Aquapark, with four winding slides and a steady stream of adventure-seeking kids and adults alike. A few floors above the main pool—with hot tubs, a waterfall and a deejay—was the Jungle Pool, a steamy oasis that was most often stumbled upon. A hidden gem, it stood out among the six other pools as a top spot to unfurl and sip tropical drinks.

Food is as abundant as the water activities, starting with the seemingly bottomless Marketplace Buffet, which offered a medley of cuisine from a grill and meat-carving station to a bakery and pizzeria. Then there are the intimate, upscale specialty restaurants: Ocean Cay (American-style fish dishes with a Mediterranean twist), Butcher’s Cut (a sleek steakhouse), Bistrot La Boheme (a relaxed French bistro) and three distinct Asian concepts by celebrity chef Roy Yamaguchi. In all, there are 11 places to dine and 20 bars and lounges, even one dedicated to Champagne.

The lounges were alive throughout the evenings, as well as the entertainment areas—guests ambled to the 934-seat Metropolitan Theater after dinner, and many were found striking out in the full-sized bowling alley. There is also an interactive XD cinema and a room dedicated to arcade games. While there’s almost no reason to stay in your cabin, 73 percent of rooms have a balcony—not a shabby locale for a midday snooze in between activities.

It was a quick-yet-impressive trip aboard the MSC Seaside, which sparkled—literally, with two shimmery staircases—with elegant details reminiscent of its godmother, Miss Loren, who continues to bless each new ship. There are now 14 ships in MSC’s repertoire, with five more to follow through 2020.