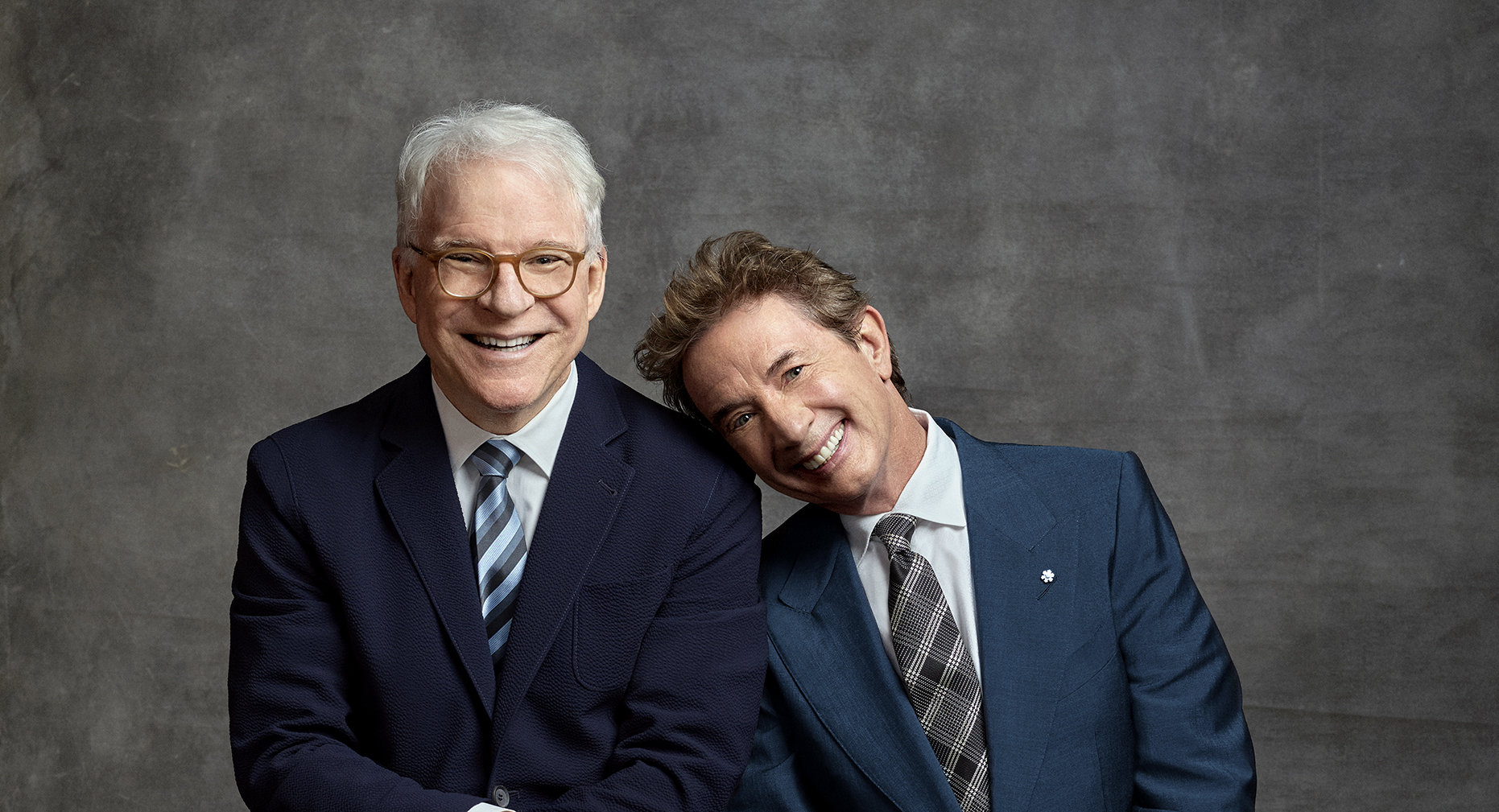 A Conversation with Steve Martin and Martin Short

If there’s such a thing as comedy heaven on Earth, this is it. Steve Martin is on the phone from New York talking about the Festrunk Brothers, the “wild and crazy guys” that he and Dan Aykroyd turned into must-see TV on Saturday Night Live in the 1970s. Martin Short, on the phone at the same time from Los Angeles, is busting out his Jerry Lewis impersonation, prompting Steve to confess, “I wish you would talk to me for the rest of my life as Jerry Lewis.”

In between, the comedy icons take playful swipes at one another while talking about a friendship that spans more than three decades—and about an ongoing tour that, this year, is dubbed “The Funniest Show in Town at the Moment.”

It’s a conversation that you never want to end. The good news is that Martin and Short likely will pick up where they left off with Lifestyle when they visit Hard Rock Live on Jan. 25. What started as an on-stage conversation at a comedy festival more than eight years ago became the foundation for a wildly entertaining show that Martin and Short have been tweaking and taking around the country (and beyond) since 2016. After a January swing through Florida, the duo will bring the show to the United Kingdom and Ireland for the first time.

Before doing a deeper dive about the Hard Rock show, Steve and Marty (as Martin refers to Short throughout the interview) were kind enough to offer revealing insights into a friendship that started on the set of Three Amigos in 1986.

Well, at least as revealing as these two can be once they get rolling.

Steve, what’s something about Martin Short that people might not know?

Steve: People probably know this, but it’s how smart he is. He knows more about American politics than I do. But that’s not saying much.

Marty: Yeah, I was going to say. You keep wondering why President Ford isn’t running anymore.

Steve: Also, whenever I go to a new town during the tour, I always try to visit the museums there. Because it’s the one place I know I won’t run into Marty.

Marty: Why, you bastard.

What’s something about Steve Martin that people don’t know?

Marty: Beyond being a card-carrying Communist?

Marty: Let me see. Along with doing so much satire and witty writing through the years, Steve is also a deeply, deeply sweet and sensitive guy. But you’d never know that from meeting him or from spending any time with him.

What have you learned about one another working in a live setting that you didn’t know from your movie work together?

Steve: In the movies, we’re acting. But in a live performance, we’re extremely dependent on each other. And Marty is completely reliable and trustworthy in that sense. It’s almost like being on a football team, where you’re really bound to that other person.

Marty: Well, as you know, our shows are done at night. And, now, I realize the extent that Steve is such a morning person.

Marty: I think we both share this, and this is one of the reasons we like working with each other. Steve is the ultimate professional. Every performance is as important as anything can be. It could be a small arena somewhere or Carnegie Hall, and they’re equally important to him. And I feel the same way. It makes it easy to work with someone.

You’ve used the phrase “work wife” to describe this relationship. So, what keeps the spark alive in this professional marriage after 35 years of friendship?

Steve: We’re pretty easy to get along with, actually. We don’t have a lot of strife. We make each other laugh. And we genuinely enjoy each other’s company.

Marty: Steve lives in New York, and I live in California. What’s fun about these shows is that it’s exciting to get to see each other and work together.

Steve: We don’t talk every day.

Marty: And even when we do talk, I don’t actually do any talking. I just listen.

Steve, for all the reasons you chronicled in your book, Born Standing Up, you stopped doing pure stand-up for more than three decades. Did you have any reservations about a return to the comedy stage when you and Marty started this back in 2016?

Steve: Well, before that, I’d been performing [banjo] with the Steep Canyon Rangers, and we had a show with comedy in it. So, actually, I had been doing comedy in the context of a music show. When Marty and I decided to combine our shows, I didn’t use the band at first because I thought, “I’ll just be a comedian.” But it all started to make sense when we added the band. The show immediately upped itself in quality, and we could interlace music throughout. … I wrote Marty the other day that our career now as a popular duo has outlived my career as a popular standup.

The show was born out of your on-stage conversation at the Just for Laughs comedy festival back in 2011. How did it evolve into what we’ll see at Hard Rock?

Marty: I think what we learned from our conversation, where we interviewed each other on stage—and what’s always been the key to this—was how much fun we had. We loved doing it. So, we did it again. And the more we did it, we realized that we should combine our individual shows and work on this other new thing.

Steve: At that point, Marty already had a solid hour-plus show just on his own. But my material was mostly introducing funny songs. So, we really had to start from scratch on what our duo show would be. But that was fun. We were constantly working on it.

Marty: And even though we have such shared comedic instincts and work ethic, our actual presentation of who we are, comedically, is completely different. That adds to the variety and energy of the night.

Steve: Whatever you just said, I agree.

The line between being funny and offensive feels razor thin in this age of political correctness. Given that climate, have you taken out or second-guessed anything in your show that you worried may cross a line?

Steve: We do think about it. The truth is that social media is a much more dangerous place than a live show. We’ve never had a complaint about the live show. You have 5,000 people there, they paid to see you, and they already like you. So, you don’t have people sitting there going, “Oh, I hope they make a mistake.” I don’t know how daring our show is, but I know there are things we say in our show that I wouldn’t put on social media.

Speaking of which, Steve has more than 8 million Twitter followers. Marty isn’t on Twitter. How do you both feel about social media?

Steve: Honestly, I’ve found that I’ve really slowed down on Twitter. It’s too easy for people to just say horrible things to you. And I’m kind of sensitive about it. So, I cut way down. I just use it for promotion, and every once in a while, a little joke that I feel is innocuous enough to get by the haters.

Marty: Well, the way you present it, it’s so tempting.

Steve: Makes you want to do [social media], doesn’t it?

Marty: Sure does. Love those haters. … You know, I just never got into it. I didn’t need more people coming up to me in an airport. And I never believed that the self-promotion of it all would change things in my life. I remember one time Steve and I were going to a Vanity Fair dinner for the Oscars, and we were sharing a car. Steve was tweeting something out, and he wrote, “I’m anxious tonight to meet Cher and get on a first-name basis with her.” And I thought, well, if my mind worked that way, then, yes, I would tweet 10 times a day. But it doesn’t. I would find it too much pressure. “Oh, no, I have to [tweet] something again.”

Jiminy Glick makes an appearance in the show. Jiminy … I mean, Marty …

Steve: You’re really convinced Marty is that character, aren’t you?

You may be right. Marty, is there is a question that Jiminy always wanted to ask a celebrity but never got that chance?

Steve: It kind of depends on who you’re talking to, doesn’t it, Marty?

Marty: It does. Jiminy once said to Steven Spielberg [Short does his Jiminy Glick voice], “When are you going to do the big one? The one that connects with the people.” You can’t ask that question of everybody.

Jiminy also asked Steve about adult diapers during their conversation years ago.

Steve: Shameful. It’s just shameful what you do.

What: “The Funniest Show in Town at the Moment”

About the show: The new Hard Rock Live, part of the resort’s $1.5 billion property expansion, is the backdrop for an evening with two of the industry’s comedy greats. Martin and Short take the audience on a two-hour joy ride that incorporates blasts from their respective pasts, “special appearances,” musical numbers, and a steady stream of back-and-forth roasting. The 2018 incarnation of this show, a Netflix special called “An Evening You Will Forget for the Rest of Your Life,” earned four Emmy nominations.

We all know that Steve Martin’s film career includes The Jerk, Planes, Trains & Automobiles and Father of the Bride. And that Martin Short’s list of classic characters includes Ed Grimley, Jiminy Glick, and Franck, the wedding planner in the Father of the Bride movies. But did you know these facts about Martin and Short?

• Martin Short won a lead actor Tony for his work in the 1999 musical Little Me, and he’s won two Emmys. Plus, in 1994, he was honored with the Order of Canada (the Canadian equivalent of British knighthood)

• Both men have written bestselling memoirs—Steve Martin’s Born Standing Up (2007), and Martin Short’s I Must Say: My Life as a Humble Comedy Legend (2014).