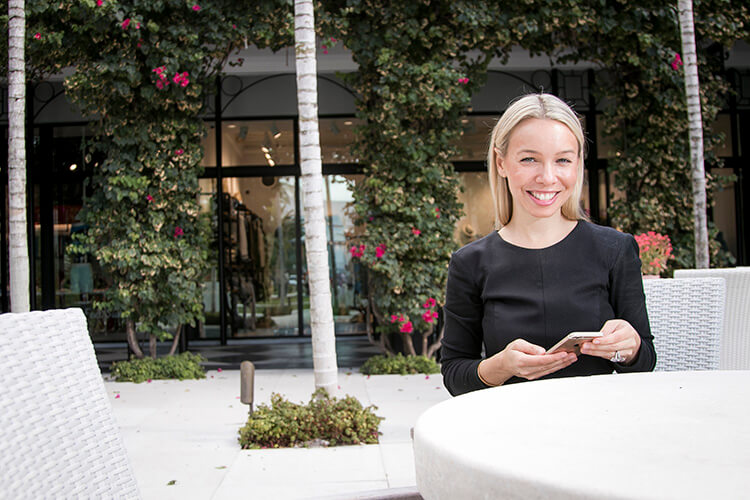 Tap of an App

Long before Apple made a business decision that paved the way for Kathryn Harper’s game-changing iMessage app—Loji (think logo plus emoji)—the Palm Beach resident was busy laying her own groundwork for an entrepreneurial leap that continues to soar.

After graduating from Miami University in Oxford, Ohio, Harper spent two years in the mid-2000s working for professional sports franchises—baseball’s Tampa Bay Rays and hockey’s Tampa Bay Lightning—in corporate sponsorships and community development. The experiences, on paper, seemed ideal for someone who earned a double major in marketing and business management.

But the Seattle native was more interested in what she didn’t know than what she already had learned.

“I saw tech as the future, but it was one of those industries that intimidated me,” Harper says. “There’s so much lingo, so many acronyms, that no one really understands. I honestly felt that if I could better understand that industry, there would be nothing that I couldn’t learn.”

It wouldn’t be the last time Harper followed the path of most resistance. She left the west coast of Florida for the east coast and spent the better part of a decade immersing herself in the digital world through stops at powerhouse technology companies Softchoice and Corus360. Along the way, in her role as account manager, she became adept at deciphering complex technology and putting it in layman’s terms for people to more easily access.

Harper didn’t know it yet, but she was accumulating the necessary tools to strike out on her own, just like the business innovators—moguls like Richard Branson and Ted Turner—whose biographies she devoured. Then, more than two years ago, as she was making dinner plans with friends, it hit her in mid-emoji.

“I’m looking at the emoji keyboard on my phone, and I start thinking, ‘Wouldn’t it be easier if the places I frequent and the things that I love were right there next to the smiley face? What if the keyboard had a smiley face, a sad face—and Starbucks and Subway? What if, instead of typing out the word Starbucks, I could just send the logo?’

“Where it became more of a business idea was the next step. Yes, I can send the Starbucks logo, but what else can it do? That’s where I got the concept of making it clickable, having the logo [embedded with] information. Why didn’t that exist?”

To answer that question, Harper spoke to app development experts everywhere from Seattle to South America to Russia. The consensus was that it wasn’t yet possible to create such an info-rich logo given the technology of text messaging. Instead of taking no for an answer, Harper sought an alternate route. One of the development companies suggested an add-on, a technology that easily could integrate into another text messaging platform. The problem was that, at the time, the king of the consumer tech jungle didn’t allow outsiders to play in its messaging backyard.

But all that changed in June 2016, when Apple gave outside developers the green light to build apps for iMessage and Siri. By then, Harper already had quit her job—and her team was developing a Loji prototype.

“Imagine creating something, taking those first few steps without knowing how it’s going to play out—and then this magic window opens,” she says. “If that didn’t happen, we would have had to go a completely different route.”

Instead, Harper was able to hire a legal team, snag investors and file a provisional patent (now a full patent, which was pending as this issue of Lifestyle went to press). Just as she always envisioned, Loji provides aggregated information, at the touch of an interactive icon, without leaving iMessage. It costs nothing for a business to simply add its logo to the Loji platform; where Loji makes money from the free app (available at the Apple app store) is by offering premium placement and adding branded content for the companies.

Harper says that Loji’s next step is to launch the platform on Facebook Messenger, now that it also has opened up to outside app developers.

Asked if her ultimate goal is to sell Loji to the highest bidder, Harper admits that she’d be crazy not to entertain an acquisition inquiry if one came along. But, for now, there’s work to be done.

“I think I’m still too close to it to reflect on the [journey],” she says. “I’m still in the trenches. … I do have a newfound respect for business owners. It’s not easy to take that jump. It’s easier to stay where you are and do what’s comfortable. But I believe that doing the things that you really want to do, even if they’re scary, is the best use of your talent.

“Everybody has dreams. Right now, I have the opportunity to chase mine.”