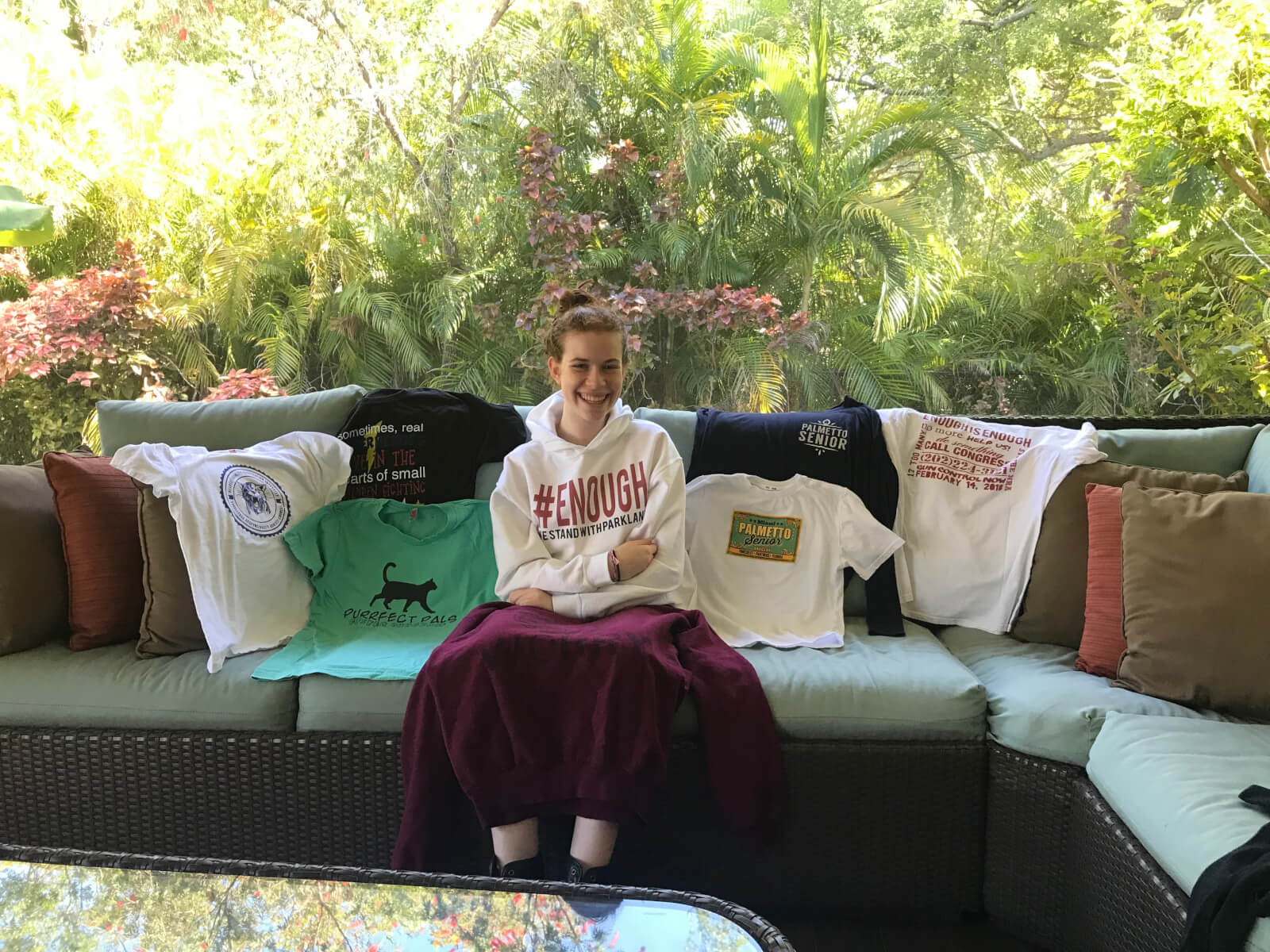 A stack of 100 T-shirts sits on a shelf inside Nicole Markus’ bedroom. The Miami Palmetto Senior High School student, who is starting her sophomore year, has collected colorful tees for as long as she can remember. Some have humorous slogans, and others were given as keepsakes from school clubs and summer camps.

“It’s funny, because I’m not generally interested in fashion,” she says. “But I do love T-shirts.”

During the summer before seventh grade, her hobby turned into charity when Markus founded the nonprofit organization SharingWear, which sells shirts and sweatshirts and donates the profits to a chosen cause. Recently, she created a design to benefit the Marjory Stoneman Douglas Victims’ Fund. On T-shirts and sweatshirts, the word “#Enough” runs through the center in bright red, with the words “We stand with Parkland” beneath.

“I wanted to create a project that could help a lot of people and be used for many different things,” she says. “The mindset is, every month, we sponsor a different organization, and anyone can make whatever shirt they want.”

Through Teespring, a manufacturing company that creates and ships SharingWear’s T-shirts, Markus offers a variety of sizes and styles. Every three days, Teespring prints the shirts that have been ordered through Sharing Wear and ships them across the country.

Markus also works with customers to custom-design shirts for family reunions, school clubs and special events. Otherwise, she offers a blend of shirts and sweatshirts with assorted remarks, such as “Rather be watching Netflix” and “Go for the gold.”

“The only way a shirt is printed is if it’s ordered,” she says. “That way we don’t have to worry about ordering a specific amount and not selling enough.”

Through SharingWear, the school’s official online T-shirt provider, Markus hosts Miami Palmetto Senior High’s PTSA uniform store. There, students can purchase school-approved blue- and white-colored shirts and sweaters with Palmetto’s logo. Profits from the Palmetto online store are split between the PTSA and SharingWear’s charity of the month.

“I never thought SharingWear would get this far when I first started it,” she says. “Now I’m partnering with my high school. It’s really amazing.”

In the last three years, Markus has sold more than 1,000 T-shirts, raising more than $8,000 for nearly a dozen charities, including the Chapman Partnership, the Ecuador Earthquake Relief Fund, Charley’s Fund and Everytown for Gun Safety.

For now, Markus’ focus is to partner with as many different organizations as she can. She plans to continue operating SharingWear through college.

“We have to keep building,” she says. “There’s always room for people who want to create shirts, which means we can keep donating money.”