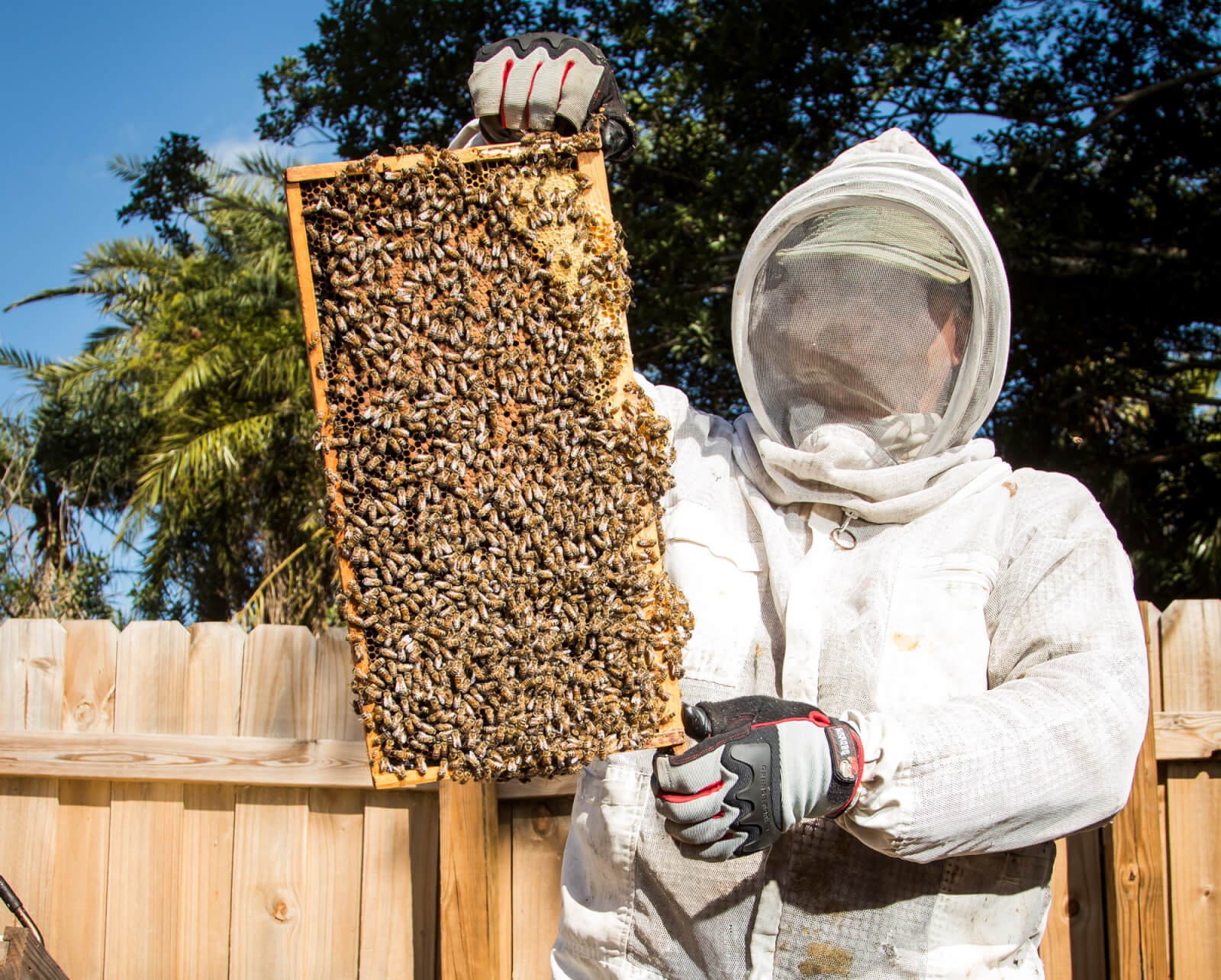 If you live within a few miles of Tradewinds Park in Coconut Creek, and you have a backyard garden, you might have noticed your tomatoes are heartier. Or that the plants on your deck that once wouldn’t thrive are now flourishing.
Thank your new neighbors—the honeybees of the Micro-Apiary at Tradewinds Park & Stables.
At the northern end of the lake, adjacent to the park’s model steam train railroad station, there’s a yellow- and black-striped structure that’s home to about 400,000 honeybees. It opened in April 2017 and is one of two in Broward County. The other, at Jaco Pastorius Park in Oakland Park, which opened in 2016, was the prototype for a countywide effort in honeybee management and rescues.
John Coldwell, and his wife, Theresa, manage the apiaries. They started their love affair with bees in their own Fort Lauderdale backyard. “We always liked to know where our food came from, so we started our own garden,” he says. “But it wasn’t doing very well. A little research brought us to the honeybee as a pollinator to help our garden grow.”
Six years ago, John placed a hive in his garden to improve pollination. That was the beginning of what John lovingly calls an obsession. “We got ‘bee-geeked,’ ” he says.
After they started tending bees on their own, they got involved with the Broward Beekeepers Association. (Since then, he became president of BBA and started another group, the South Florida Beekeepers Association.) The Coldwells learned how to care for their backyard bees and became state-registered beekeepers.
But, John says, when you become a good beekeeper, you get more bees than you bargain for. “At the end of a season, you’ll have more hives than you’re allowed,” he says. For a standard, single-family home, the state permits three permanent beehives and three temporary beehives. “So, if you don’t have someone to give those hives to—another beekeeper, perhaps?—what can you do?”
He met Dan Lewis, a BBA member and a board member of the Broward Regional Health Planning Council, who had been noodling the idea of having micro-apiaries (sometimes called bee yards, where managed beehives of honeybees are maintained) on public land. The idea was spurred by the Obama administration’s 2015 announcement of a plan to restore land and support efforts to preserve bee colonies across the country—the National Strategy to Promote the Health of Honey Bees and Other Pollinators.
With the financial support of the Broward Regional Health Planning Council, and leadership from the Urban Farming Institute and its partnership with the city of Oakland Park, Florida’s first micro-apiary prototype opened at the Discovery Farm and Gardens at Jaco Pastorius Park. The Tradewinds Micro-Apiary is the first educational micro-apiary in a Broward County park.
John and Theresa and their company, The Urban Beekeepers, have become the sponsors of the program, providing the bees, hives and equipment. John began The Urban Beekeepers around the time he started getting more involved in his hobby. “The more we learned, we kept expanding,” he says. “So, we were buying a lot of equipment, and then I started making my own bee equipment.” The contractor by trade now sells beekeeping equipment through his company.
Theresa, a real estate agent who is also a registered nurse, says the educational component of the micro-apiaries is her passion, along with spreading the word about the healing properties of honey. Some medical research suggests honey has antimicrobial effects when applied to wounds, boosts the immune system, mitigates allergies and has antidepressant benefits, among other uses.

ENTERING THE MICRO-APIARY
The Coldwells’ love of bees is infectious. At the micro-apiary at Tradewinds, when they check on the colony, they wear protective outfits that make them look like they’re ready to walk on the moon.
John starts the ritual by searching the ground for dried twigs to stuff inside a smoker, an essential part of the beekeeper’s tool kit. He lights it, then takes it with him into the micro-apiary. “Smoke masks the pheromones that bees use to communicate with one another,” he says. “They have an ‘alarm pheromone’ that will signal danger. This helps keep them calm.”
There are five or six hive boxes inside. He selects one to inspect, opens the lid, removes the cover and there they are—thousands of bees, swarming on a honeycomb. “This colony looks healthy,” he says upon his inspection, during which he looks for stressors such as viruses, contamination and parasites.
Why should we care about healthy honeybees?
“Eighty percent of the things that grow in our environment require pollination—trees and the plants in your backyard. Most of the food we eat, too, requires honeybee pollination—avocados, almonds, berries, apples, cucumber, zucchini, watermelons and other types of melons,” he says. “When we talk to neighbors, and the folks at the urban gardens, the production has gone up drastically.”
He credits it to the pollinators who leave the micro-apiary to forage.

MANAGING HIVES
The micro-apiary opened at a critical point in honeybees’ existence. One of the dangers for them, which beekeepers are watching, is the varroa mite, a tiny parasite capable of annihilating entire bee colonies. Visible to the naked eye, the mites look like a tick. “With the micro-apiaries, we have an accessible way for researchers to study our bees,” John says. “And provide an education center for the community.”
It also allows scientists to keep reducing multiplication of “Africanized” wild bees that made their way into Florida in the 1990s. Scientists use the term to refer to the offspring that results from the interbreeding of aggressive species from Africa with the docile European species that originally populated the Americas. These bees are more inclined to attack intruders—and have led some beekeepers to give up their endeavors.
Properly managing beehives and the micro-apiaries controls interbreeding. In fact, John often removes feral hives from the park and moves them into the managed apiary after a quarantine period. He also manages hives throughout South Florida to create safer bees, removing aggressive queens from hives and replacing them with docile ones.
“We take the hive, pinch the Africanized queen and remove her, and we break the brood cycle. We give them a new, certified mated queen who is filled with nice genetics for strong honey-making bees,” he says. “And we put them in that hive, and we change the genetics of that hive by 50 percent. We’ve taken a possible aggressive hive out of commission.”
John says the micro-apiary at Tradewinds was “a natural transition” for the program. Since it opened, it has hosted a number of interested visitors—school groups, Girl Scout troops, budding beekeepers and researchers from Florida Atlantic University.
“We can really become a national model for how micro-apiaries work in communities,” he says.
For more information about the Tradewinds Park Micro-Apiary, visit broward.org/parks/thingstodo/pages/microapiary.aspx.