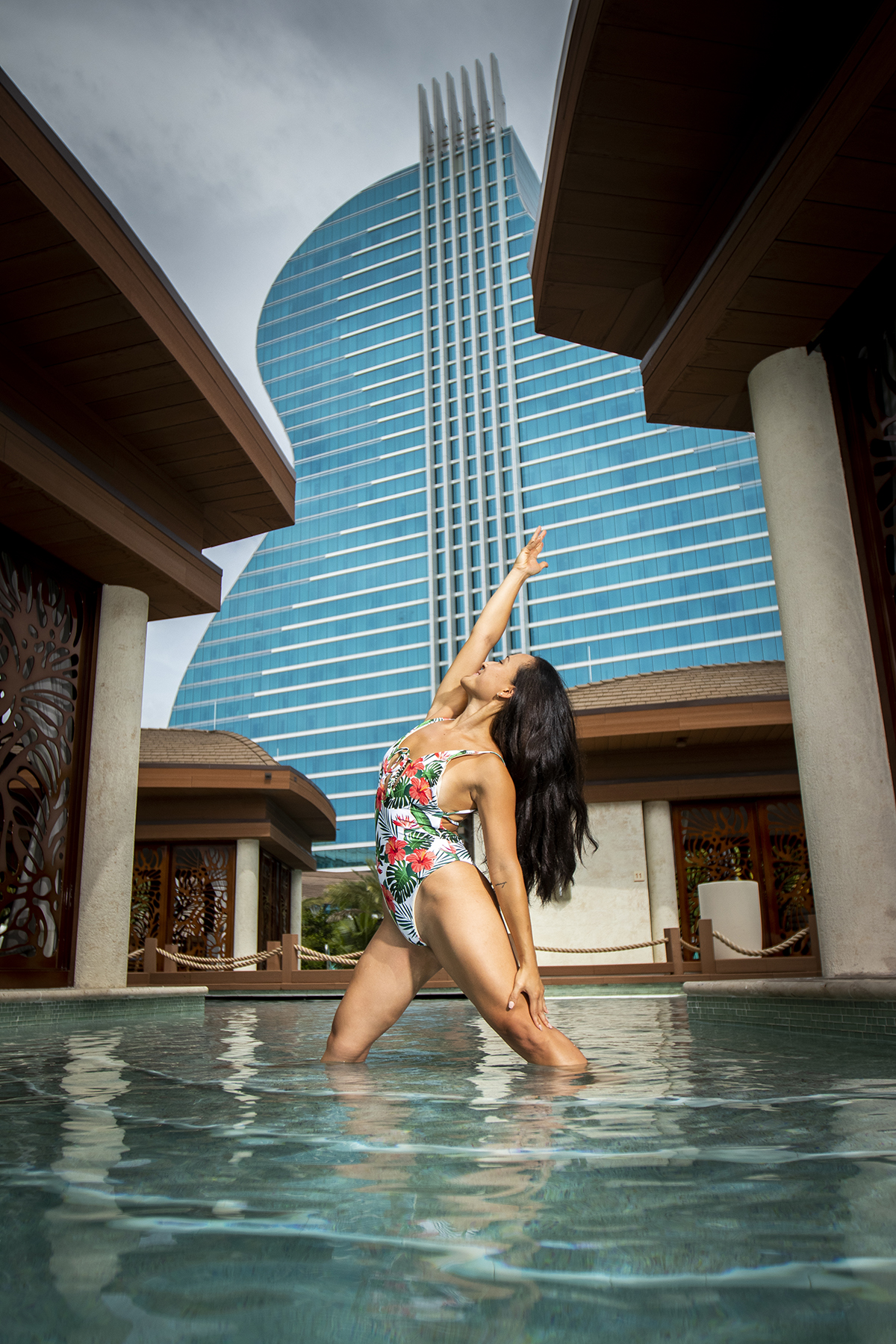 Dance had been a prominent part of Julianne Aerhee’s life for as long as she could remember, and her time at the University of Miami was no exception. While in college, she was a member of the Miami Heat dancers, years that coincided with the team’s run of consecutive NBA Finals appearances (2011-2014) with LeBron James.

But the length of those seasons, the demands of the routines, and the hours of rehearsal took their toll. Her back regularly popped out of place, producing severe pain and prompting visits to a chiropractor. All that changed when a new yoga studio opened near campus. A month into the classes, her back had strengthened enough to maintain her spine alignment. She stopped seeing the chiropractor.

For someone whose manner of understanding and expressing herself always had been through movement, the athleticism connected to yoga was a revelation. But the more she practiced, the more her curiosity was piqued.

Other doors were opening, and Julianne needed to know where they led.

“I fell in love not just with the physicality of it, but the self-discovery,” says the 29-year-old, who started doing teacher training in 2013. “What are the stories that have been so deeply ingrained, that have shaped my identity?

“For example, I identify as a perfectionist, an overachiever, someone who likes to have a plan. As a 20-year-old, I had a story in my head that I’m not enough; I had to do more to make up for that. This speaks to lived experiences and cultural expectations (both her parents are from South Korea). My mom immigrated here when she was 10 in the 1970s. It was a very different world for her. I remember her saying, ‘Because you’re a minority, it sets you back. You’re going to have to work that much harder to have a shot.’ So, already, I felt ‘less than’ because of who I am, inherently.

“That’s one small story. But through yoga, I was able to develop a different vantage point. What are the things in my life that made that story true—so true, that I was still living it out in adulthood? And is there space for that narrative to be changed?”

Her thirst for experience and insights took Julianne halfway around the world. After graduating in May 2014 with a double bachelor’s degree in communication and psychology, she spent six months backpacking—alone—across Singapore, Cambodia, Vietnam, Thailand, Bali, Australia and New Zealand.

After a stint with a social-impact startup upon her return—“The only thing I looked forward to during that time was teaching my 9 p.m. class,” she says—Julianne realized that yoga “was the jam.” Specifically, she focused on the process that had been so transformative for her, teacher training.

In 2018, Julianne launched The Inspired Life with Jessie Potter, Jody Potter (Jessie’s mom) and Megan Eastman, a yoga school that offers training for 200- and 300-hour certifications. In addition, she continues to teach vinyasa-style classes that incorporate other elements (including her dance background) at studios like Sol Yoga in Wynwood.

As much as she appreciates the beauty of yoga’s physicality, it’s the untapped wisdom in our bodies that continues to push and inspire Julianne in her teachings.

“How do I use the physical practice of yoga to wake up something else?” she says. “Why do we step into a hot room and do this uncomfortable thing for 60 minutes?

“For me, yoga is the arena in which I get to be curious about where I’m still holding tension. And then to safely let go of those binds and say, ‘My adult self can live differently—and experience life from a more free and open space.’ … We all create stories around who we are and how we need to live. What yoga asks us to do is to consider if we really need to live that way. And what would be possible if we didn’t.”