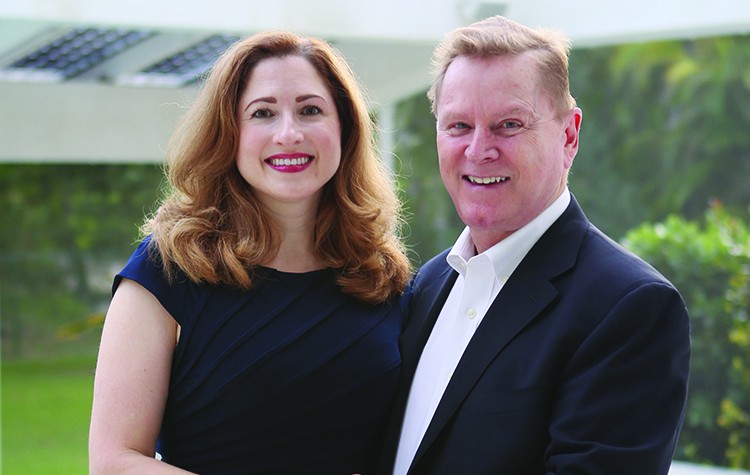 From the time he could walk, David Harper worked on building sites with his father, who owned a construction company.

“He’d make me do the hardest jobs out on the construction site, I think, to show that he wasn’t [showing favoritism],” Harper says. “But he also used it as a way of saying, ‘Do well in school … and you won’t have to be out here digging ditches and laying concrete blocks.’ ”

When a young Harper learned that the “nicely dressed” men carrying rolls of paper on a site were architects, he became interested in the creative side of the buildings his father constructed.

The Atlanta-born Harper graduated from the University of Miami and opened his own architectural firm, HADP Architecture, originally called Harper Partners. The company worked on projects such as a renovation at The Biltmore and the construction of American Airlines World Gateway terminal at Miami International Airport.

Harper became especially invested in South Florida building when he assisted in recovery efforts in Pinecrest and Homestead after the area was devastated by Hurricane Andrew in 1992. He became the chair of the South Florida Building Code committee, created after the hurricane to rewrite building codes, which are still used today.

In October 2012, Harper’s company merged with HKS, an architectural design firm, where he is the global director of higher education. He develops buildings at universities, such as construction of Florida International University’s health and wellness center.

Of all his projects, Harper’s most personal is his home. He and his wife, Jennifer, decided to build a functional and environmentally sustainable home for their family of two younger children and two college-aged children. They designed and built the Domus Alba, which received the 2014 U.S. Green Building Council South Florida Award for most outstanding leadership in energy and environmental design among homes or single-family projects. It was the first LEED gold-certified home in Pinecrest.

Pinecrest Lifestyle asked Harper a few questions about his career and home.

1 How did your construction experience influence your architecture career?

When people go to architecture school, most of them have no background in actually understanding what it takes to build; it’s all theoretical. I had the practical application side from the beginning. When I drew something, I had a better insight into the ramifications of that drawing in terms of getting it built. I think that was a tremendous benefit. I’ve continued to have a strong involvement in actual construction throughout my career as well.

2 What do you enjoy about designing buildings for higher-education institutions?

One of the things I enjoy most is the fact that the users of these buildings—the faculty, professors and students—take the long view of their buildings. They’re not developers; they’re not people who are just putting up a project and selling it and stepping away. They have a long view of the investment that they’re making, so they’re serious about the quality of the building, about the long-term maintenance of those buildings and about how they will stand against the test of time.

3 What inspires you when you’re working on a project?

I try to be inspired by the context and by the environment. Every location is different. I try to take advantage of climate, weather, topography and vegetation. The design responses that I would do in Miami are different from what I do when I’m in Ohio, different still from what I do in California. I try to be contextual and very much about the place and the time. When we’re building in Atlanta or Ohio, we frequently use brick. When we build in Miami, we use stucco, concrete and glass. When we build in California, we sometimes use facing material with wood in addition to concrete and steel.

4 Why was it important that your Pinecrest home be sustainable?

My wife worked on the largest existing LEED gold-certified building project [on a university campus] at Georgia Tech. After she came out of that project, she had a passion for green living and sustainability, so that added to my own inclinations. It created a fervor in us to build a house that responded to those aspirational beliefs we held important. We realized that even in a great place like Pinecrest, few houses are designed to take advantage of the climate and conserve energy. [We wanted] to set an example for our children—to show that all of these values are important and to really walk the talk. Many architects say you should protect the environment, but unless you have a chance to design and live in your own home where you’ve had a chance to make the decisions, you can’t live it.

5 Why did you choose to build in Pinecrest?

I had lived in Pinecrest years before and sold the house. Then, we had a condo in downtown Miami and a home in Atlanta. We were bouncing back and forth. [Because of our little kids], we decided we needed to settle down in one spot. We decided Pinecrest was where we wanted to be because it’s a great family community and has nice, heavily landscaped lots. So you could be close to urban areas like Coral Gables and Miami, but you’re in a residential, resort-like area.