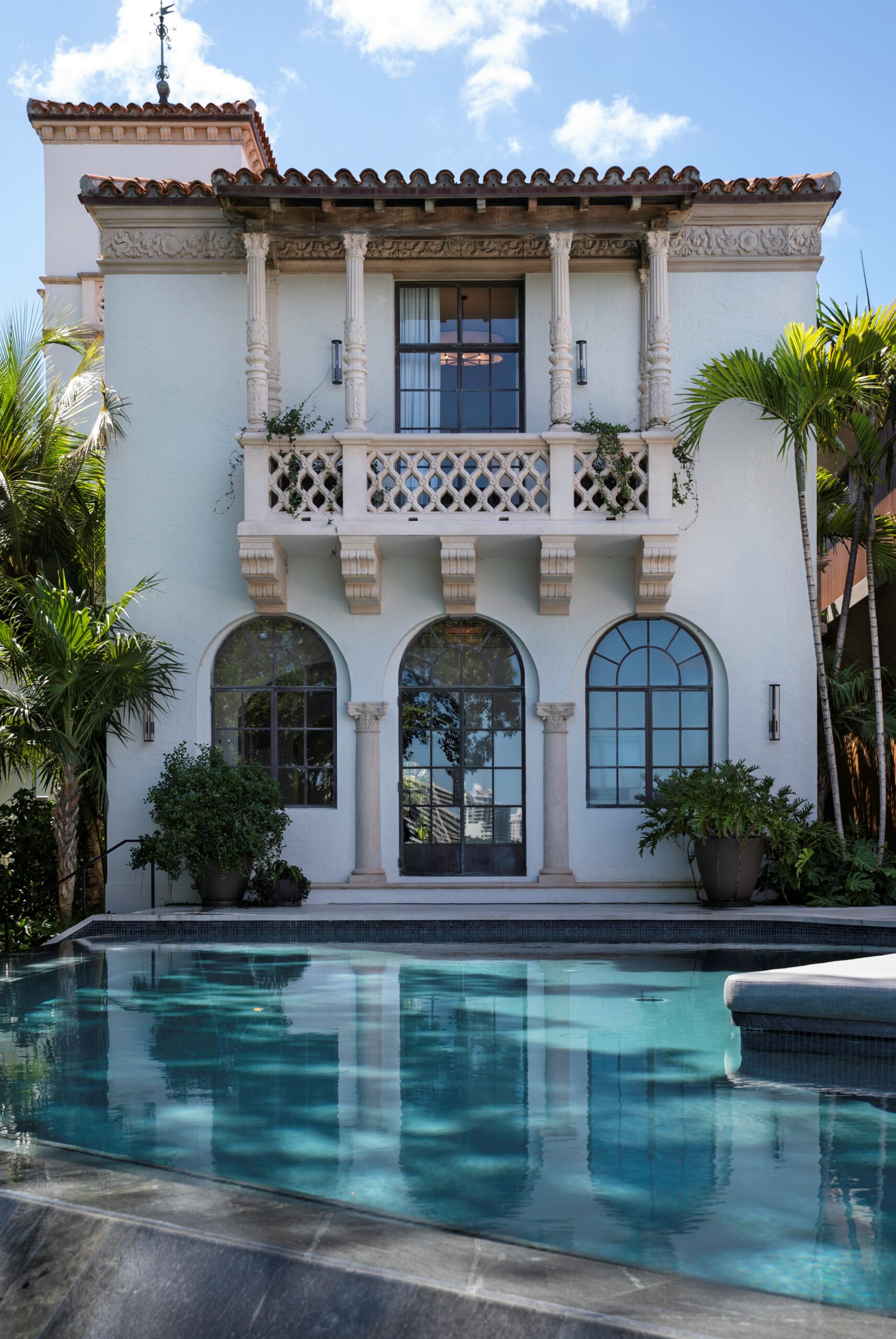 A Star Island Guest House Reveals Its Own Compelling Story

What interior design firm Dunagan Diverio achieved behind the columns

Everyone in Miami knows about 22 Star Island, and a great number—around 800,000 people—have experienced it on YouTube as well. More than one posted video—drone operators working overtime—celebrates the splendor of the compound with its massive, lagoon-style pool, private dock and two Jaume Plensa statues framing Biscayne Bay. Built on spec by Todd Michael Glaser, one of the biggest names in luxury homebuilding, and designed by Domo Architecture + Design, the 17,000-square-foot modern mansion drew headlines when it fetched $49.5 million in an off-market deal more than a year ago. The rumored buyer was New England Patriots owner Robert Kraft, so naturally the estate, which sits on 1.7 acres, is one of the most coveted, fetishized and gossiped about properties in all of South Florida.

For three years, Charlotte Dunagan and Tom Diverio, of Dunagan Diverio, oversaw the interior design, and Diverio is eager to tell the unusual story of the property’s 5,600-square-foot guest house, a 90-year-old curiosity that the firm also designed. “The guest house is a very old building, a Mediterranean-style structure, and it used to be part of the original Miami Beach yacht club on Star Island,” the designer says. “The house used to be on the other side of the lot, actually on the neighboring lot. When the architect and Todd Glaser started working on this property, they actually lifted the entire structure, the whole building, and moved it to the other side of the property. They actually hired a company from Nantucket or Martha’s Vineyard that specializes in picking up homes and moving them. There’s even a time-lapse video on YouTube.”

Diverio says that the guest house is notable for both its style and its positioning. “The main house is ultramodern—it looks like a spaceship, so the juxtaposition of these two houses next to each other is a little bit crazy,” Diverio says. “There’s only eight or ten feet between them—you would almost be able to jump from one roof to the other.”

He says that, initially, the guest house was in “pretty rough shape. It wasn’t technically a historic house, but it did have historical significance in that it was a known structure, pretty famous on Miami Beach. The architect and the developer could have knocked it down and gotten rid of it if they’d wanted to. But they wanted to keep it because of the significance of it. They gutted the inside and completely restored all the exterior—all the windows and doors are original, steel-framed glass windows and doors.” All the ornate architectural details, balconies and moldings were restored; the restored exterior columns are so stylized that they make Corinthian columns look severe by comparison. But Dunagan Diverio designed the interiors to relate to the modernity of the main house, so the result is a deft blend of tropical modern and Mediterranean Revival.

“What we did on the interior was refurbish all the historic details—the handpainted frescoes, moldings, columns and beams,” Diverio explains. “Then we introduced modern furniture and modern built-ins.” Sleek millwork from Italkraft became the backdrop for a wealth of interior columns and arches. And the guest house boasts a wealth of modern amenities: the ground floor contains a spa, a yoga studio and an 820-square-foot gym.

The upper floor features two master suites that share a central living space and a kitchen. “What’s really cool about those bedrooms is that the ceiling has all the original handpainted crown moldings,” Diverio says. “The original parquet floors were all refinished. We tried to keep as much of the original structure as possible.” The historical context is offset by contemporary furnishings, with pieces from Niba and Artea Home, and fabrics from Romo and Holly Hunt. One bedroom is anchored by a steel-cube Regina custom bed (from Artea Home) in charcoal gray. The rigorously angular bathrooms are even more modern than the bedrooms: the design firm tapped the respected, 40-year-old Bon Vivant Custom Woodworking, based in Opa-Locka, to fabricate bathroom cabinetry; the flooring is Italian porcelain tile. The marble and glassed-in shower, steps from the private balcony, seems to float.

If there’s a problem with this fantasy guest house, it’s that the guests won’t want to leave.