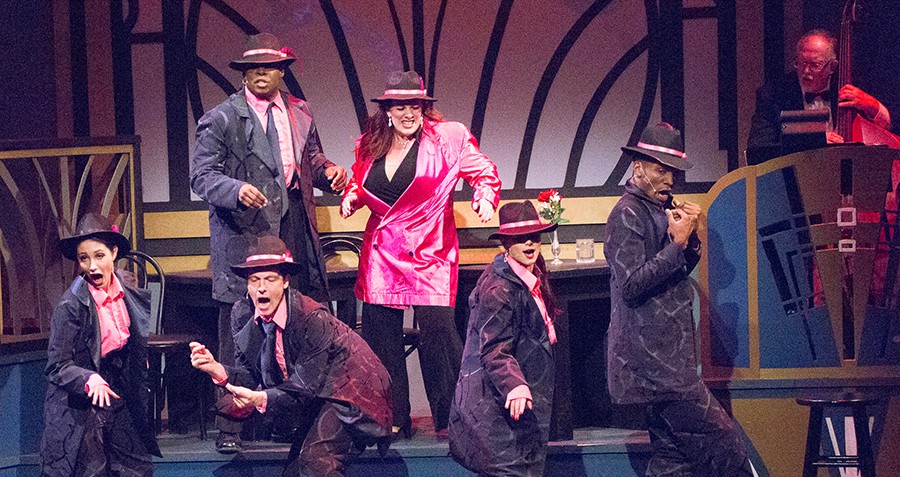 At the Stage Door

Theatergoers in South Florida most likely can’t remember a time when Stage Door Theatre wasn’t presenting live theater in what was previously a cineplex behind a strip mall on Sample Road in Coral Springs.

One night in 1993, co-founder David R. Torres stumbled upon the then-dilapidated building by chance, and, as Bunn says, he immediately had a vision.

“He was on his way to the Farm Store on Riverside Drive for milk, and he said, ‘Wait a minute, there’s a movie theater back here,’ ” Bunn says.

Despite the building being inhabited by gangs, vandalized and on the verge of collapse, a light bulb went off in his head. At the time, Bunn had her own theater troupe and was rehearsing in one of the florist shops Torres owned. She had been working as a florist for Torres and his wife, Ann Marie.

Between the two, they figured they had the backgrounds to get live theater up and running. Torres had worked as an electrical engineer for Florida Power & Light, and with Bunn’s experience as a performer and administrator, it was the perfect match.

“I had grown tired of working for other people and we had an opportunity to get into this space,” she says. “We did it all on credit cards in the 1980s,” adding that the initial cost to get the building in shape was $300,000.

“We turned the theater into a theatre,” Bunn says. The Stage Door Theatre opened in January 1995 with a production of “Fanny and Sadie” by local playwright Dorothy Willis. Based on her mother’s life, it was a musical about the decades-long friendship between a Jewish woman and an African-American woman.

Stage Door Theatre quickly built a fan base of mostly seasonal residents who longed for live theater, especially Broadway musicals, which they were used to seeing back home.

Bunn remained determined to keep the theater going—they had successful seasons and regular subscribers and were the only game in town. Bunn jokes: “If you Google ‘arts in Margate,’ you come up with us or a bunch of martial arts businesses.” After almost 25 years, there’s more attention on the performing arts organization by the city as it concentrates on redevelopment.

Bunn says the theater, which is on the border of Coral Springs and Margate, has an economic impact on the community “and officials realize the value of that,” adding that audiences come from as far north as Palm Beach and as far south as Kendall. “They are spending money here at restaurants and shopping locally, [business] that the community wouldn’t otherwise get.”

A grant from the city’s Community Redevelopment Agency contributed to the production of the musical “Nine,” which ended a five-week run in June, and it’s offering a matching grant for signage on the building, which Stage Door Theatre wasn’t able to invest in previously.

Additionally, Bunn says there has been talk of the agency purchasing the building that houses Stage Door Theatre, which would cement its place as a performing arts and events space. Already, the theater is rented by community groups for private events when there isn’t a Stage Door performance. As someone who has always been in the arts, Bunn says a regional theater in a community is more meaningful now than ever.

“It’s a pretty dark time in our country, and what people need is escapism—to come to a theater like Stage Door, and be completely entertained,” she says.

• “Minnie’s Boys” (through Aug. 6), musical about the Marx Brothers.

• “Victor Victoria” (May 4-June 7, 2018), the stage version of the film comedy about a female nightclub star performing as man.