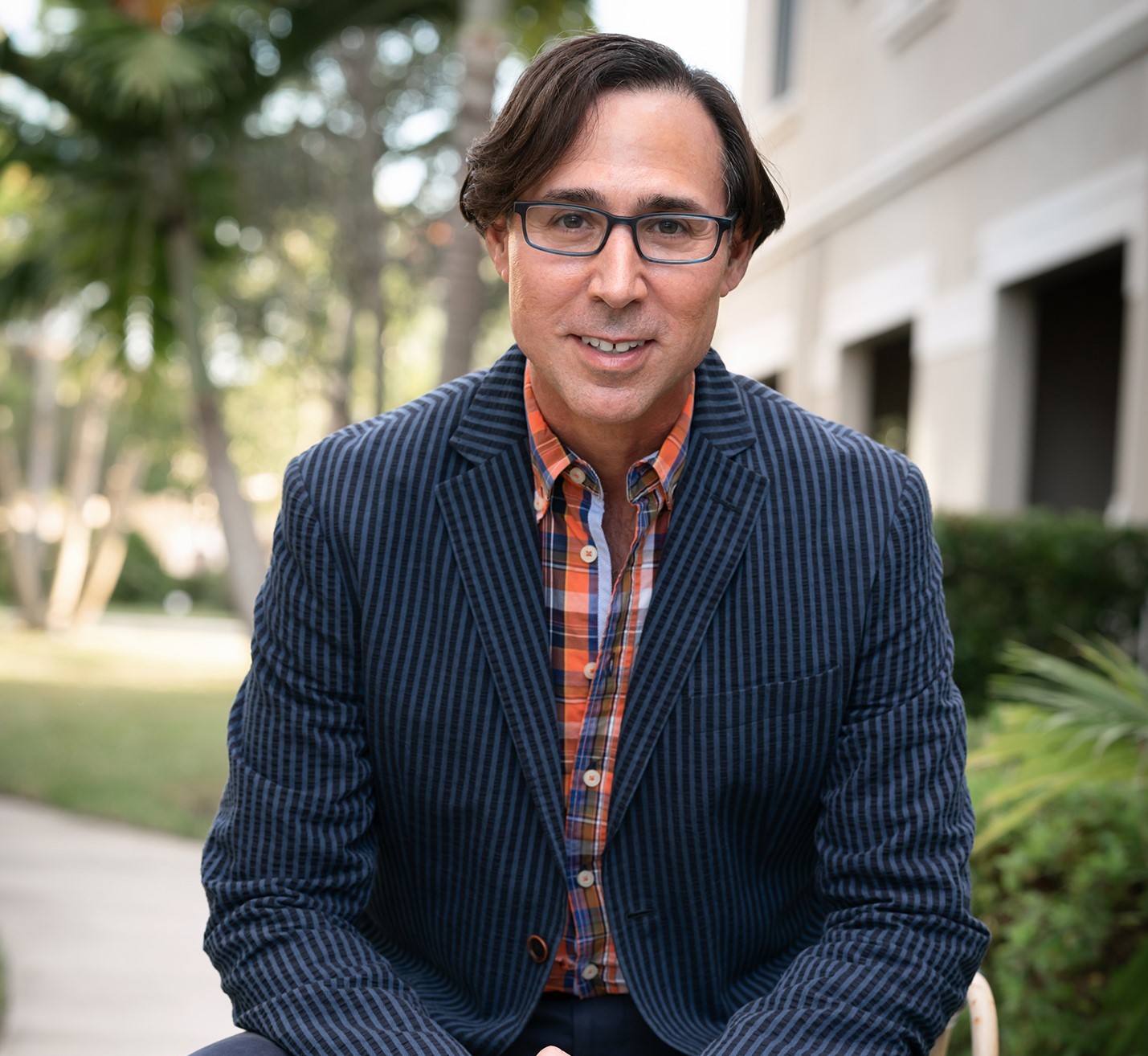 It’s less than a month to showtime, and Michael Goodman is experiencing a dose of diva-like anxiety. Do his pumped-up cheekbones need another shot of filler? Will Botox relax his furrowed forehead? Is he skinny enough to strut through a rack of skin-revealing outfits?

Oh, how Michael Dean as Cher wishes he could turn back time.

What Goodman might be losing in elasticity, he’s more than making up for with endless passion for impersonating his longtime idol and legendary songstress-and-glam icon. And for the love of Bob Mackie, does he ever pull it off. Behold the striking, angular and undulating facial features; dark, mesmerizing eyes; avalanche of curly locks; and the extravagance of those signature figure-hugging costumes.

It’s a side hustle that he’s been enjoying for eight years while hustling to bring his own business center stage—GPR/Goodman Public Relations. This spring, the Greater Fort Lauderdale Chamber of Commerce honored the firm with the 2022 Small Business Innovation Award.

But for all his success across board rooms and in the entertainment spotlight, Goodman, 58, is most proud of the chasms he’s helped navigate for the LGBTQ+ community. Once the “token gay” on various business boards, Goodman believes he’s not only gained respect and admiration, but opened minds.

“I’ve done my best to insert myself in powers of position where maybe traditionally a gay person wouldn’t have that opportunity,” he says. “You can do advocacy in different ways, but for myself it’s being a gay business owner who is well-respected and regarded.”

Goodman believes his Michael Dean as Cher show—Dean is his middle name—gives him even more credibility in the LGBTQ+ pioneering category.

“There’s a lot of people in the gay community that look up to me because, here I am a drag queen, and I’m also very successful,” he says. “I crossed over … I’m able to live in two worlds.” 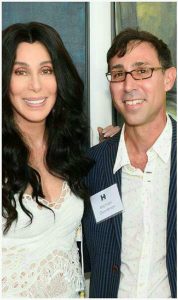 Goodman was reluctant to bring those two worlds together when he launched his public relations firm while simultaneously taking his fascination for Cher to a cosmetic and costume-change level. He fondly recalls producing variety shows as an 8-year-old with his sister and cousins during Christmas gatherings at his family’s home in Plantation. Sonny and Cher were the headliners—Goodman as no-work, no-frills Cher, and Sis as Sonny.

“Funny that I actually became Cher at 50,” he says with a laugh.

Early on he kept his drag show a secret, concerned about reaction from prospective clients and the business community as a whole. In effect, a person who came out of the closet at about the age of 20 was now back in, albeit with a thigh-high-booted leg sticking out.

The situation troubled him.

“Of course, it’s like living a lie,” Goodman says. “Nobody knows who you really are. All my clients know now, but it was a process. Like coming out.

The second emergence was made easier by positive responses such as the time someone called one of Goodman’s clients to ask if they knew “your PR guy is a drag queen?”

Goodman pauses and smiles at the memory. “The client said, ‘Yes, he’s great. I’ve gone to his shows.’ ”

Still, his initial coming out experience remains a painful memory. Goodman describes himself as “one of the geeky kids” in high school “not sure of who I was, sexuality-wise.”

The bullying was relentless, and he wasn’t counting on support from his parents with whom he had a rocky relationship.

One day, his mother was bad-mouthing a cousin who was gay. “She was being very anti-gay, making anti-gay comments,” Goodman says.

Goodman’s defense of his cousin prompted his mother to ask if he was gay. His response confirmed her suspicion and ignited a backlash that continued when his father arrived home from work and Goodman was told to leave the house.

His mother’s words sting to this day.

“She told me, ‘You’re going to get AIDS, and you’ll never be successful,” Goodman says.

Goodman’s mother died only a few years later, at 43, in an auto accident.

“When she died, we were not on the best of terms,” he says. “I think she saw [his homosexuality] as her flaw. It’s common. I don’t hold it against her.

“Parents have a vision for their kids and sometimes it doesn’t match. What happens is, they can’t accept it.”

Through the years, Goodman’s father, who died of cancer at 78, became more accepting. He had a long career in men’s retail clothing stores and was impressed by his son’s business accomplishments. His father was even aware of his drag act.

“He told me in the hospital that he was proud of me,” Goodman says.

For all the tumult of his childhood home and what he calls a “strange dynamic” with his parents, Goodman did not have to go far to seek support, guidance and love. As a teen, he became a nanny for a family across the street. Physician Howard Ruskin and his wife, Paula, had three children and, as Goodman says, “I got to have this doctor’s kid’s life.”

The job included the usual suburban family weekday and weekend activities—games, practices, shopping—plus trips to the circus, strawberry picking and cool vacations. Goodman grew close to Paula, who died of cancer in 2015.

He remains close to the now-adult siblings, including the son who recently attended one of his Cher performances. Goodman figures that Paula and Howard knew he was gay, but “it never came up. They trusted me with their kids.”

While he was attending Florida Atlantic University, Paula’s sister helped land him a $5-an-hour job with a public relations firm in Fort Lauderdale where he stayed through graduation and then climbed the ladder as accounts coordinator and accounts executive.

He later worked for Macy’s as a special events manager in South Florida and moved on to charitable fundraising at a nonprofit before opening Goodman Public Relations in Fort Lauderdale in 2014. Goodman has six employees and what he sees as an innate ability to attract and retain clients.

“I understand perception,” he says. “I’m really keen on reading a room, diving into what a person’s mindset is and how to push buttons to attract attention to what I need to do.

“I think being gay gives me a sensitivity that makes my career better. I have a really good relationship with my clients. It’s an honesty and transparency that I now try to live.”

He’s booked for many charitable events as Michael Dean as Cher. Hence, the physical preparation ahead of a late May appearance for the Art and Culture Center/Hollywood’s Cuisine for Art fundraiser at Seminole Hard Rock Hotel & Casino.

You can occasionally catch his act at Lips Drag Queen Show Palace, Restaurant & Bar in Fort Lauderdale (Goodman is an investor in LipsUSA). He’s also performed in Palm Springs, California, where he owns a second home. 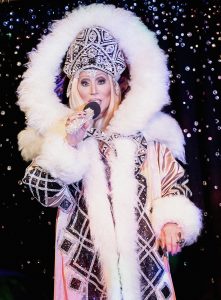 Despite strides made through the years for increased acceptance and advancements for the gay community, Goodman is aware and alarmed about a sudden shift toward reversing the course.

Still, the Florida legislature recently passed the “Parental Rights in Education” bill, which supporters say is meant to allow parents to play the major role in discussing LGBTQ+ topics with children. Opponents call it the “Don’t Say Gay” bill, claiming the law is designed to suppress and demonize the gay community by restricting discussion in schools.

Despite South Florida’s overall reputation as a gay-friendly region, Goodman isn’t surprised that the subject of sexual orientation, particularly relating to transgender issues, is being cast in a negative light across the state.

“Florida is not as progressive as people think,” he says. “For a lot of [minorities], there’s a lot of blatant, quiet discrimination.”

Two years ago, Goodman was one of seven Broward County residents who shared their experiences of coming out for the documentary Open Dialogues: Stories From the LGBTQ Community, produced by the Art and Culture Center/Hollywood.

The group includes a transgender woman who spoke about three suicide attempts in her arduous journey to happiness. In the film, Goodman said “my life was torture” before coming out and “very liberating” in the aftermath. But he also said he hasn’t forgotten the tremendous burden of a closeted existence.

“You find that when you’re hiding and you’re lying and you’re pretending to be someone else, you know, that doesn’t go away. It’s hard.”

Goodman is motivated to keep raising his voice for the voiceless.

“There’s still more work to be done,” he says, “because there are people still gullible enough to listen to a handful of people who perpetuate hate.”

Goodman gets a break from troublesome times as Michael Dean as Cher.

“There’s a handful of Chers across the country, and we all know each other, pretty much,” he says.

Like most, Goodman lip syncs the hits. It’s not about the pipes, he says. It’s about the primping and prancing. Goodman has a “team of people” involved in the three-hour preparation to apply the makeup, fashion the wigs, and slip in and out of the outfits for an appearance. He wears bodysuits, limiting hair shaving to his hands and neck area.

Ahead of a show, he diets, hires accompanying dancers, works on choreography, and helps to engineer lighting. He’s attended and studied enough Cher performances to perfect her every leggy stride and twitch of tumbling tresses.

As a veteran George Michael drag performer and mentor once told Goodman: “You don’t have to do anything. You look like her … You already captured the audience when the curtain opens.”

Although Goodman refers to himself as a drag queen, he’s quick to point out that he doesn’t fit the proper definition.

The first time was with a Fox TV crew filming an interview in Cher’s Los Angeles hotel room before an American Music Awards appearance in the late 1990s. Goodman was there as a favor from a friend at the network, masquerading as a production assistant. Goodman exchanged no words with Cher, but he did get to mic her up and spent the rest of the weekend hanging around her trailer at the awards show.

The second encounter came six years ago at a fundraising event in Miami. This time he figured he’d get a chance to chat and take a photo. So, he arrived with a prop—a magazine cover of Michael Dean as Cher.

Cher, the original, was impressed.

“Do they love you?” Cher asked.

“No, they love you,” Goodman replied.