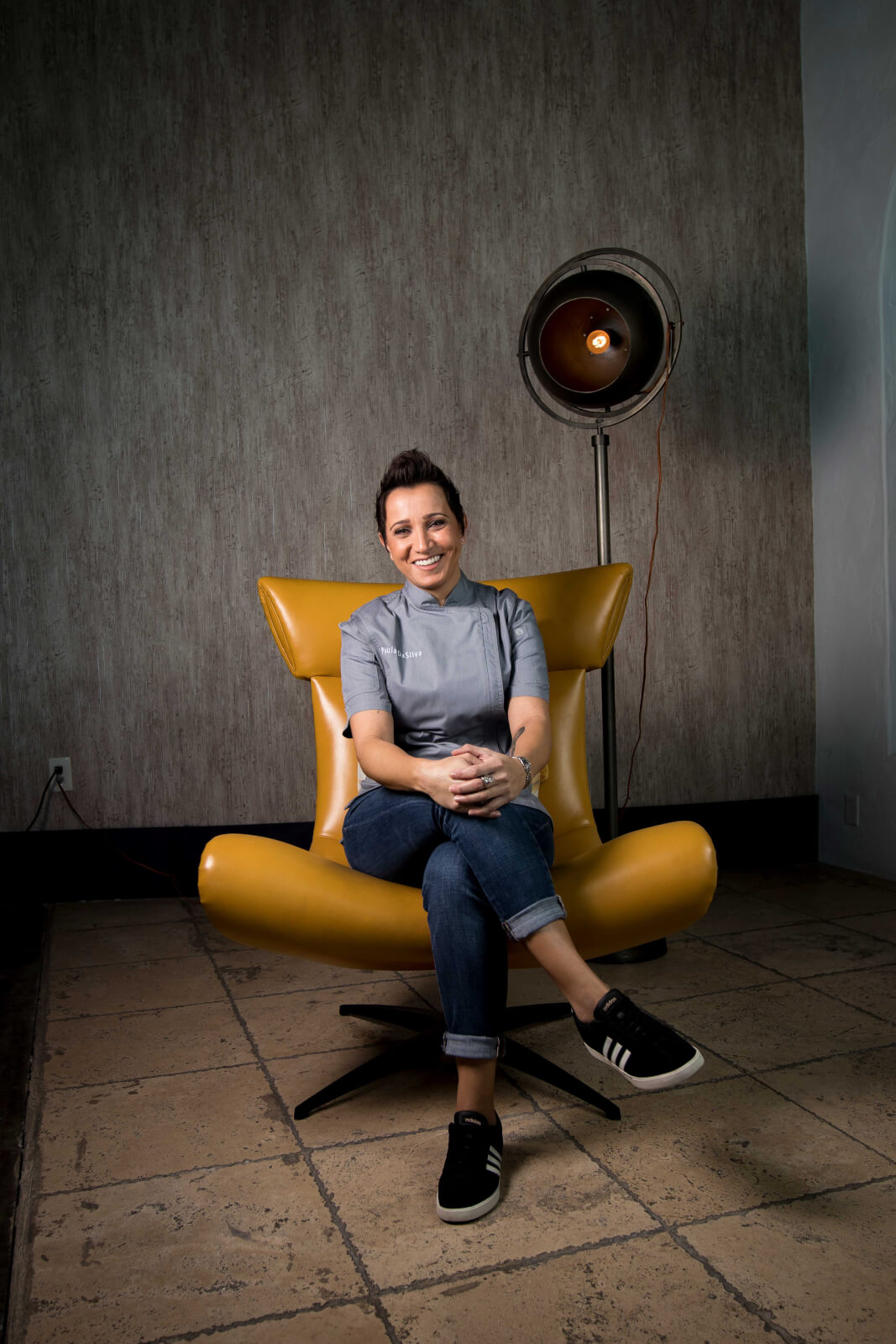 On the days when she dons her traditional white chef’s coat, it can be said that Paula DaSilva wears her heart under her sleeves instead of on them. That’s because the Coconut Creek resident and new chef de cuisine at Burlock Coast on Fort Lauderdale Beach has three (visible) tattoos on her arms that give glimpses into her life and culinary career.

One is a Grey Kunz spoon, one of her favorite kitchen tools, which she uses for plating, saucing and more. This desire to display finesse with technique began with her family’s culinary influence, partly represented by another tattoo—her grandmother’s name spelled out in katana, or Japanese swords.

The third tattoo is an arrow, which DaSilva got when she left her position two years ago as executive chef at 3030 Ocean in Fort Lauderdale. Feeling that she was no longer growing, she took time off.

“To shoot an arrow, you have to pull it back. When you release it, it shoots itself forward,” DaSilva says. “If life ever holds you back, eventually it’s going to propel you forward.”

For a year, DaSilva let life propel her by traveling and doing consulting work. She met her partner, Carissa, bonded with Carissa’s two children and left the restaurant world for the first time since she was a teenager.

Along the way, DaSilva discovered something about herself.

“I missed the kitchen,” she says. “I missed being around cooks. I missed the hustle and bustle of dinner service, my favorite time of the day.”

Her return to the kitchen is the latest chapter in a story that started in Brazil. It’s there that DaSilva lived with her grandmother for a year while her parents were setting up a new life in the United States. She and her siblings joined their parents when she was 10 and helped to run the family restaurant, Oasis, in Medford, Massachusetts, serving foods typical of the Brazilian state of Minas Gerais.

The family moved to South Florida when DaSilva was 14 and opened two restaurants: Panorama in Pompano Beach and Brazil Tropical in Delray Beach. DaSilva picked up more responsibilities, going from helping with food prep to running the Brazil Tropical kitchen at 17—with her father’s supervision.

It was a culinary education that she admits is rare for children to receive these days. It came as no surprise to her family that DaSilva decided to expand her culinary skills at Art Institute of Fort Lauderdale after high school. While there, she decided to stay busy by waiting tables at the Marriott Harbor Beach Resort, where managers urged her to develop her talents.

“They were like, ‘Listen, you’re going to culinary school. What the hell are you doing waiting tables? You need to get out of there and come to the kitchen,’ ” she says.

DaSilva worked at both hotel restaurants, which closed to make way for 3030 Ocean in 1999. There, she worked under chef Dean James Max, eventually becoming sous chef.

Her reputation in the kitchen at 3030 Ocean prompted staff to encourage her to try out for “Hell’s Kitchen,” a reality show hosted by the famously hot-headed Gordon Ramsay, who yelled at aspiring chefs competing for a dream job.

“I have a little bit of a temper, and every once in a while [my staff] would get yelled at,” says DaSilva, 38. “So they thought that would be great” to see her getting yelled at.

She didn’t pass an audition for the fourth season but tried again the next year after an acquaintance at the hotel got her a private interview with showrunners. When she was chosen for the fifth season (which premiered in 2009), she found that the competition’s physical requirements were as important as her culinary skills. Throughout the six weeks, she slept about four hours a night, waited hours for scene setups, and endured “punishments” for losing challenges.

“The only time we could ever talk was when we were microphoned,” says DaSilva, a resident of Coconut Creek for 13 years. “We even had to go to the bathroom with the microphone on, which was the worst thing. We learned how to turn it off.”

Despite the challenges, DaSilva thrived. She finished as the runner-up, feeling content and relishing in the relief of it being over.

“As much as I worked hard my whole life, I never worked for 20 hours a day trying to cook and do challenges,” she says. “I never put myself through that mental and physical stress at the same time. What I did learn from Gordon is that you can be pushed really hard.”

After a few more years at 3030 Ocean, DaSilva was ready to venture out on her own in 2010. She opened 1500 Degrees, a farm-to-table restaurant, at Nobu Eden Roc in Miami, gaining national fame as the executive chef and snagging a James Beard Award nomination. The restaurant made Esquire’s 2011 “Best New Restaurants in America” list.

She returned to 3030 Ocean in 2013 as executive chef. After two years, she took her break and didn’t come back until she became restless.

Upon her return, DaSilva handled food and beverage operations at The Ritz-Carlton Bal Harbour, Miami, and opened its Artisan Beach House Restaurant and Lounge in January. There, she had the freedom to use seasonal and local ingredients to cover a broad range of cooking styles.

The same flexibility is what attracted her to Burlock Coast, closer to home at The Ritz-Carlton, Fort Lauderdale, where she has been since August. She has introduced a few dishes indicative of her love of “good comfort food”: pork belly tacos (popular at 1500 Degrees) and moqueca (Brazilian fish stew) with roasted swordfish and fried yucca.

“This is the first time that I have a new group of sous chefs that I didn’t bring with me,” DaSilva says. “They’re very talented and I want to inspire them to be creative, and I want to be inspired by their style—that’s how I want this menu to be driven.”

As she ponders her future and enjoys “the best view” of all the restaurants she’s worked at, she remembers the arrow on her right arm.

“I needed to get out of cooking for a little bit,” DaSilva says. “But I always knew that, in the end, it’s going to be in a kitchen for me.

Salt and pepper, to taste

Sauté onions and leeks with butter in small stockpot until soft. Add chopped garlic and lightly sauté. Add molasses and butternut squash and cook for 2 minutes. Add chicken stock and bring to boil. Lower heat and simmer until butternut squash is cooked. Add heavy cream and bring soup back to boil. Season with clove, nutmeg, salt and pepper. Blend soup in blender, strain and serve. Serves 8.

In medium pot, add lentils, bacon, water, thyme, bay leaf and garlic. Bring to boil. Reduce heat and simmer for 30 minutes. Keep lentils in liquid until serving. Warm 2 tablespoons of butter in medium skillet; add leeks. Cook until soft but without color. Add carrot, onion and celery; cook for 2 minutes. Deglaze with white wine and completely reduce. Add lentils with their cooking liquid onto skillet; season with salt and pepper.

Salt and pepper, to taste

Preheat oven to 400 degrees. Add olive oil to skillet and heat in oven. Place fish in pan. Put pan in oven for 10 minutes or until thoroughly cooked. Remove from skillet and serve atop Beluga lentils. Serves 6.

In skillet, brown chicken parts well. Add onions and cook until tender and slightly caramelized. Add chicken stock and thyme, and cook until desired flavor. Do not skim fat. Strain, finish with butter and serve warm.