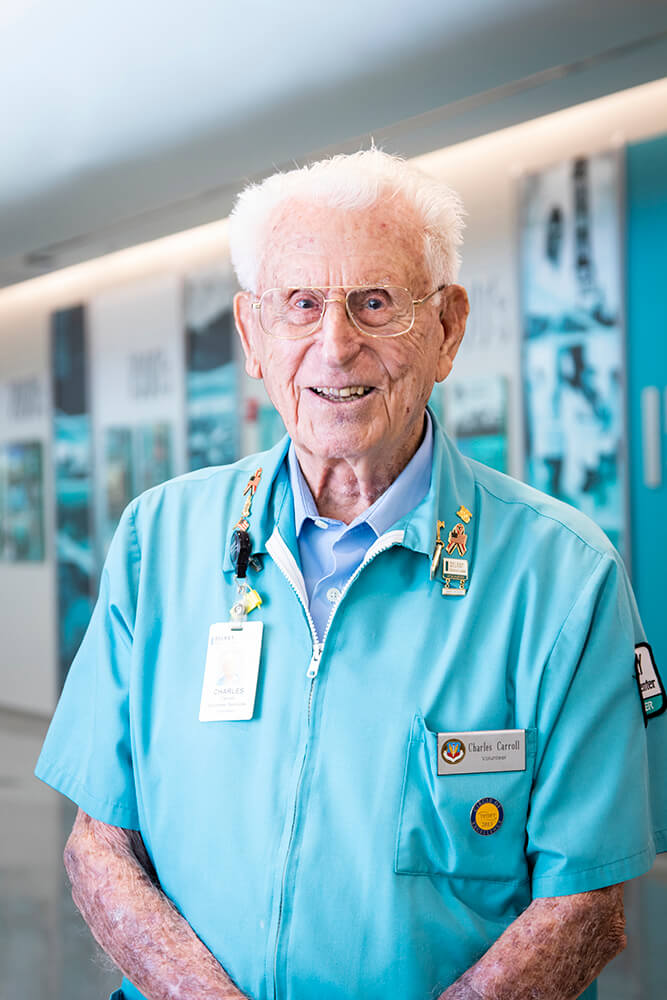 A Century of Smiles

In an entire century of life, Charles Carroll has not once considered retirement.

He’ll turn 105 on June 25. And he’ll keep volunteering at the hospital that saved his life 11 years ago as long as he’s alive, he says. He was working at a golf course in Delray Beach when he had a heart attack in 2007. An ambulance brought him to Delray Medical Center, where doctors fixed him.

He started by wheeling patients to and from their rooms. Nowadays, he greets patients and their visitors when he volunteers on Tuesdays and Thursdays.

“When they come through that door, they’re after something—to see somebody or to get help,” Carroll says. “That’s what we’re here for. We try to keep them happy and listen to their stories.

Carroll never ceases to amaze the people he meets, says the hospital’s director of volunteers, Becky McCoy. Several years ago, Carroll was pushing a patient in a wheelchair. The man turned to him and asked, ‘How old are you, anyway?’ Carroll told him he was 98. “Ninety-eight?” the man exclaimed. “I should be pushing you!”

It’s no wonder he’s become a celebrity of sorts at Delray Medical. “Charles is such a part of our team that everyone greets him,” McCoy says. “They know him in the hallway. If Charles misses a day, they’re so concerned about him. It’s like, ‘Becky, where’s Charles? Is Charles OK?’ ”

For someone who was born when Woodrow Wilson was in the Oval Office, Carroll leads a remarkably independent life. He lives in a Delray condo; an aid provides help seven days a week, but she leaves after 6 p.m. Carroll tries to read one book a week (he loves James Patterson novels), and he’s an avid watcher of sports on TV, especially professional golf (back in the day, Carroll was a 9-handicap). He balks at traditional medications, opting instead for natural remedies for his minor ailments (like some peripheral artery issues).

It’s important, Carroll says, to be around other people, a big reason volunteering is the highlight of his week.

Gene Barback, who volunteers with Carroll at the hospital, has eaten lunch with his friend for six years, he says. “Charles has a great sense of humor, and he’s really a leader for us,” Barback says. “He doesn’t have a mean bone in his body—just a real gentleman. He has a brilliant mind.”

Carroll reckons he gets his work ethic from his father. Not only did he set an example of being a hard worker, but he was also well-liked in the small town where he grew up. Carroll was born in Springfield, Massachusetts. He studied landscape architecture and recreation in school and graduated from the University of Massachusetts in 1936. When he graduated, there were no jobs because of the Great Depression; people couldn’t afford luxuries like plants for landscaping. They were struggling even to buy a loaf of bread, he says.

So he enlisted in the U.S. Armed Forces. He was deferred because his father was dying of cancer, so he worked for a while in Yonkers, New York, coaching baseball and football at a boys’ home. Sports always have been a big part of his life.

Once his father died, he started his first assignment with the Army in Oswego, New York. “They have a contest to see how high the snow gets there—10 or 12 feet in the air,” he jokes. He also followed Gen. George S. Patton on a mission in North Africa, picking up prisoners of war and bringing them back to the States.

He met his wife, Helen, not long after. He served in Casablanca and did a tour in Italy. He and Helen had two children, Judith and Barry. He retired from the Army as a major at 62, and he and his family moved to Virginia. When Helen’s health began to fail (she died in 2014; they were married 68 years), the couple moved to Florida, where Judith was living and the weather was more hospitable.

“And there are a lot of golf courses here,” he says, providing a glimpse at the sense of humor that keeps those around him smiling.