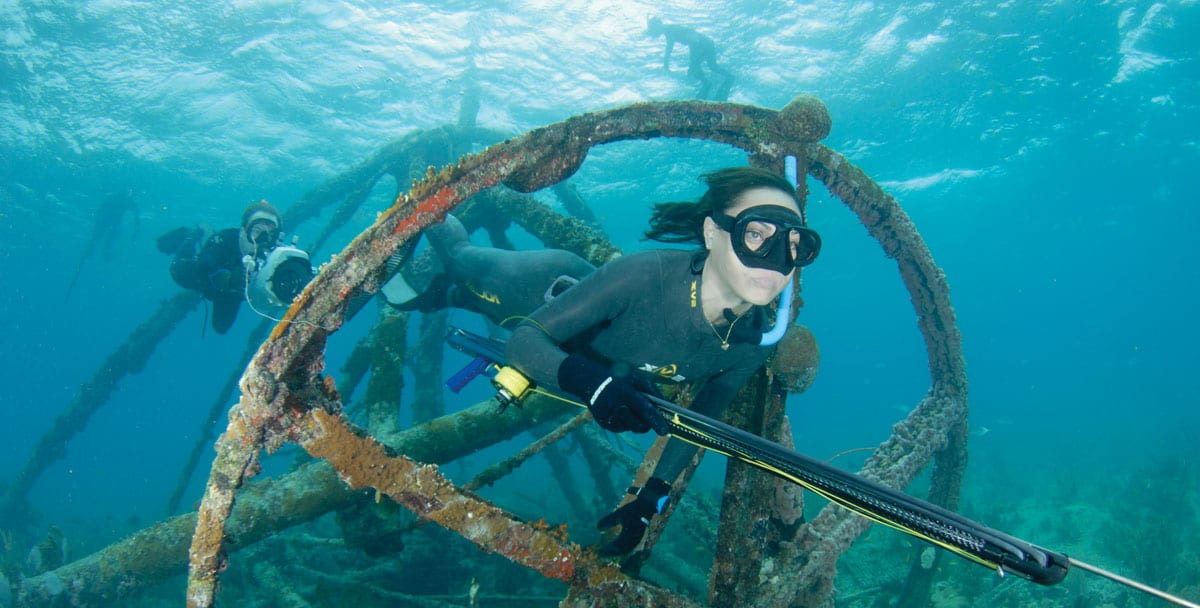 There are two things to know up front about Sheri Daye, whose full-time role as an IBM engineer would be impressive enough on its own were it not for her weekend exploits in the ocean. For starters, the former host of “Speargun Hunter,” a show on Outdoor Channel that followed her free-dive spearfishing exploits from 2006 to 2013, doesn’t take no for answer.

That’s why she picked up a speargun in the first place. When her boyfriend at the time refused to let her take a turn with his gun during a dive, “I got mad and bought my own,” the longtime Boca Raton resident says. “I’ve been spearfishing ever since.”

Daye isn’t easily dissuaded, either. Five years ago, off the Miami coast, the winner of the 2006 Women’s Free-Dive Spearfishing National Championship was treading water after impaling a fish. Out of nowhere, a hammerhead shark made an aggressive charge. Daye managed to avoid an initial attack by placing her hands on either side of its head and swimming under the shark. But the hammerhead repeatedly circled back, forcing Daye to poke it “like a million times” with her unloaded speargun before it finally swam away.

Daye made her way back to the boat and told her friend about the episode—to which he replied, mixing his metaphors along the way, “You know what they say: If you wanna get back on the horse, you should jump right back in the water.”

Diving in headfirst never has been an issue for Daye, whose other life passion—the state’s largest watersports expo, The Blue Wild (pictured above)—will be on full display April 22-23 at Broward County Convention Center in Fort Lauderdale.

The event started back in 2006 as a fundraiser with spearfishing seminars for Twin Palms Center for the Disabled in Boca, the nonprofit organization that provides a supportive environment for Daye’s brother, Terry, who is developmentally challenged. (At the time, Daye was president of the Twin Palms board.) A decade later, The Blue Wild has taken on a life of its own, with 150-plus exhibitors and sponsors; more than a dozen speakers; marine-, cooking- and fitness-related workshops; and more.

“It’s a big party for ocean lovers,” says Daye of the now for-profit event, which continues to donate a portion of its proceeds to charities, including Twin Palms. “It started out with a lot of freediving and spearfishing, because that’s my background, but now I’ve grown it and now I have fishing, marine art, underwater photography, kayaking—so now it’s more interesting to the general population.”

Daye, who grew up in Miami before moving to Boca in 1981, fell in love with the ocean after becoming scuba-certified in high school. Her interest in deep diving with oxygen, which involves depths of more than 100 feet, eventually led her to explore the controversial world of free-diving, where participants hold their breath rather than use scuba equipment. After many years of training and practice, Daye can free-dive to 100 feet below the surface for as long as four minutes.

She’s adamant about educating others regarding the dangers of free-diving, which has claimed the lives of friends of hers who held their breath too long, blacked out and never regained consciousness. Daye advises the public through her expo to take classes that teach the proper way to hold your breath. “Don’t overdo it,” she says. “There’s no reason to push yourself and risk your life.”

Similarly, Daye understands that spearfishing “isn’t everyone’s cup of tea.” That she took to the sport immediately—making several world-record catches over the past decade, including a 179-pound yellowfin tuna—speaks to her goal-driven personality. “You’re either the hunter type or you’re not,” she says. “When I first got into it, [my mother] wasn’t too happy. But she’s gotten used to it. Now, whenever she’s low on fish, she’ll put in an order.”

Daye hopes to expand the expo once she retires; she even talks about starting a West Coast version—The Blue Wild West.

“There’s still a lot of opportunity for it to grow,” she says. “I am passionate about the ocean. It’s not just the hunt, but the journey. It’s just a beautiful experience to be in and around the water, and I like to share that feeling with other people though the expo. It’s nourishing to your soul to be around nature and the ocean—and it’s a good distraction from the stress of everyday life.”