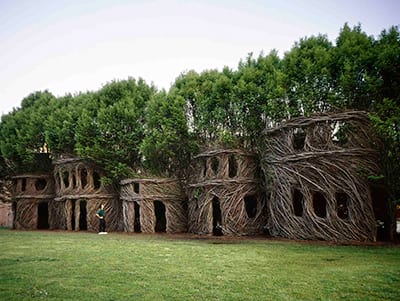 The artwork of Patrick Dougherty is coming to Pinecrest Gardens in November 2017 for a 21-day exhibit featuring a collection of site-specific sculptural works funded by the Knight Foundation.

The collection, entitled “Stickwork,” will require the participation of around 100 volunteers, as each piece is built up branch by branch and twig by twig.

Dougherty’s first works were large sculptures of branches and twigs scaled to about his height. Since then, his artwork has grown in size and scope; he has produced nine mammoth works for over 30 years all over the world, including at Deokpyeong Ecoland in Seoul, South Korea; Jardin des Arts in Châteaubourg, France; TICKON Sculpture Park in Langeland, Denmark; and the Honolulu Museum of Art.

Philip Haas’ “The Four Seasons” sculpture display achieved great success during its stay at Pinecrest Gardens from November 2014 to April 2015, welcoming over 70,000 visitors during its five-month residence. It is anticipated that “Stickwork” will draw in around 330,000 viewers during its time there.