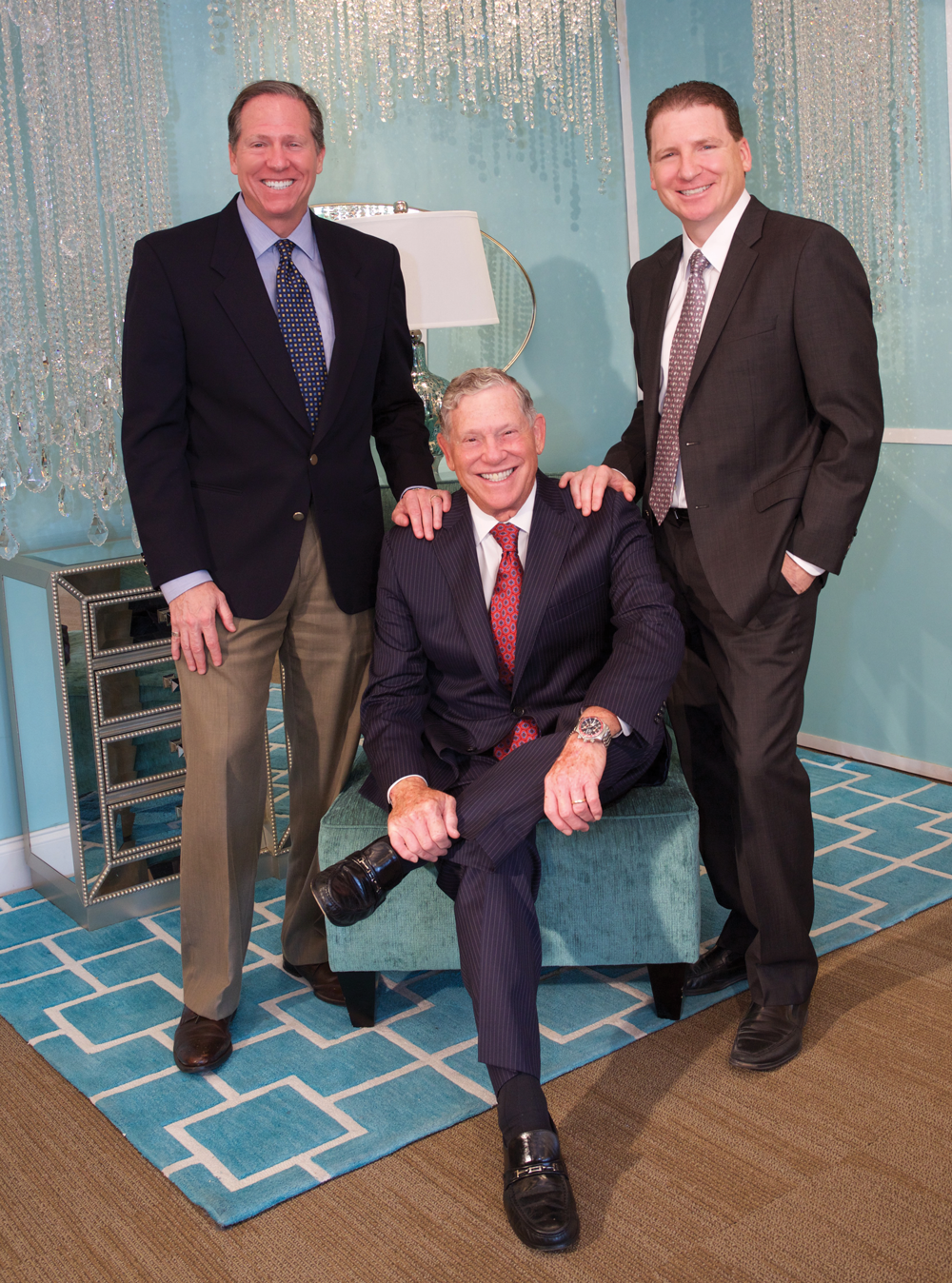 By Arnie Rosenberg and Martin Lenkowsky

There’s no executive suite at Capitol Lighting. Walk through an unassuming door at the back of the Boca Raton showroom, and you’ll find a modest office shared by Eric Lebersfeld, president and chief marketing officer; his brother Ken, CEO; and their father, Herman, co-chairman of the board, who, at 78, still comes to work three days a week.

The third- and fourth-generation Lebersfelds are keeping this 92-year-old family business thriving. Its 10th store opened in Fort Lauderdale in May and is the company’s first location in Broward County. A Doral location, opening later this year, will be its first foray into Miami-Dade.

The brothers, who had to make tough decisions to keep the company afloat through the Great Recession, don’t take for granted the legacy they’ve inherited from their great-grandparents, Max and Ethel Lebersfeld, who started the company in 1924.

Ken, 46, and Eric, 50, never met their great-grandparents, but they know their story well: They came to New Jersey from Austria in the early 1900s and saw the opportunities presented when electric lighting began replacing gaslights. It was in the bedroom of Arthur—Max and Ethel’s son and Ken and Eric’s grandfather—that the patriarchs opened their first showroom. The first retail store, in Newark, followed in 1924. Arthur eventually took the reins of the company, and in 1973, when he was ready to retire, he moved to Florida and brought Capitol Lighting with him.

Ken and Eric weren’t exactly dropped into comfortable executive jobs in the family business. Both began at the ground floor, literally, and an early age.

“When my father took Eric and me to work, he gave us the dirtiest jobs,” Ken remembers. “One summer, I opened 100 cartons of shades in sweltering heat in the East Hanover, New Jersey, warehouse. We started at the bottom. The benefit is that we know what it takes to do every job at the company.”

What they didn’t know was how to make the difficult choices facing them in 2010.

“We had a very flat organization, run by committee, with six Lebersfelds in the company,” Eric says. “My father and uncle (Max Lebersfeld) were still doing the lion’s share of decision-making. But we needed to make a lot of very challenging decisions.”

By the end of 2011, they had downsized the operation from 215 employees to 140 and restructured management with a leadership committee—with four Lebersfelds and six non-Lebersfelds.

The decisions were painful but necessary. They were especially hard on Herman. “My father came home that night and told my mother, ‘I just got fired,’” Eric says.

Nearly 700 retail lighting showrooms closed between 2009 and 2013, but Capitol Lighting survived. Today, the retail operation has evolved into smaller stores serviced by larger stores in a distribution center model. The company’s internet operation, 1800lighting.com, which began in 1994, also plays an increasingly important role in the future of the company.

But the work ethic and the personal commitment today’s leaders inherited from their father continue to be a key to Capitol Lighting’s success.

“Our dad always taught us to look at things from the other guy’s point of view,” Ken says. “Don’t offer a deal that you wouldn’t take yourself. Don’t take anything for granted. Be grateful.”

“He’s not one to sit you down and give you advice,” Eric says. “He would always lead by example. He was always out on the sales floor, always had his hand in the customer experience. And he would never say, ‘I told you so’ or ‘I would have done it differently.’ He would ask, ‘What did you learn from that?’”

Eric and Ken recognize the legacy they’ve been given by three generations of Lebersfelds before them. “We feel a great responsibility to continue that as leaders of this company,” Eric says.

Ken’s children, 23 and 26, have mapped out career paths that don’t include Capitol Lighting. And it’s too early to say if Eric’s kids, 14 and 16, will be Capitol Lighting’s fifth generation. “The path is open, just not determined,” says their dad.

“We have a family culture here. We all care about each other,” he adds. “Running the team like Ken and I are, family attitudes are just ingrained, they’re part of the culture. That’s going to be our winning formula for success.”

Roscioli, a native of Philadelphia, works with daughter Heather and son Robert Jr. Heather is the general manager; she’s involved with the administrative end of the business. “She does the payroll for 125 people,” he says. “Rob is more on the artistic side. He helps more with the painting, but also helps in the administrative department.”

Roscioli’s children became actively involved in the family business at an early age. In fact, Heather began helping out part time when she was just a sixth-grader. Now, both children are stockholders in the company. “They earned it,” Roscioli says. “We couldn’t have done this without the family.”

As soon as Roscioli finished high school, he knew he wanted to work around boats. He headed to Florida and got his first job cleaning and then finishing boats. “I worked my way up to brush-painting,” he says. Then, a new material for spray-painting came along. “No one else knew how to apply this material. That’s how I built my business,” he says. “After many years, I had the opportunity to rent an actual shipyard. I’m a risk taker—no risk, no reward.”

Roscioli has been mentored by a few heavy-duty names along the way, including Ray Kroc, founder of McDonald’s, and Charles Walgreen. He now uses what he learned. “I love mentoring my workers,” he says. “I try giving them the opportunity to be somebody.”

He says he mentors his children the same way he does his other employees. “They have to earn everyone’s respect,” he says. “They are not treated any different from any of the other guys in my yard.”

Roscioli does credit his children’s hard work and creativity with the company’s ability to be innovative. “Working together has allowed us to create great synergies and even greater products, such as our newest R58 Sports Cruiser, which we are really excited to debut in October,” he says.

However, he admits that working with family can be difficult. “You really can’t be that tough,” he says. “We are a family business, and everyone we hire, we want them to feel they are a part of our family.”

Founding Clive Daniel Home in 2011 came naturally for Clive Lubner and his son, Daniel. “We have sawdust in our blood,” Daniel says, pointing out how their family has been involved in carpentry for generations, owning furniture stores both in the U.S. and in the family’s native South Africa. “My dad owned a successful chain of furniture stores named Robb & Stucky. He had one in Boca and in 12 other locations.”

Daniel first joined his father’s company in the late ’90s, but things were a bit different back then. “There were a lot of layers between us,” he admits. “But now, we work hand in hand. Sometimes we disagree, but usually I wind up seeing he’s right.”

“We have a great partnership,” adds Clive, who specializes in merchandising and product development. “Daniel’s excellent with social media, advertising and marketing. He’s also doing well on the financial side of the business. He’s got his left brain and right brain working.”

“There’s nothing like working with him,” Daniel says of his father. “He’s got a great vision in terms of where design is going. We feel our merchandise is on the cutting edge of what our clients are looking for.” He adds that his dad has done a wonderful job teaching him the business. “He’s been a great mentor, a great sounding board. With his experience, he’s seen every type of situation.”

As for separating family from business, it’s not easy for the Lubners. “One of our core conversations revolves around work because that’s where our passion lies,” Daniel says. “We talk about the things we enjoy.”

“There’s no such thing as separation,” Clive adds. “When you love what you do, it carries through all hours of the working day.”

Terra Group is a Miami-based development firm founded in 2001 by Pedro Martin and his son, David. Before joining his dad in the family business, David earned his MBA as well as a law degree.

He had also built—and later sold—a coffee shop in his college town. “He always wanted to do real estate,” Pedro says, “and he saw this as an opportunity.”

“Our family grew up in Miami; we saw the city’s evolution,” David says. “I thought it was the time to work with my father who had built a great reputation.”

Pedro, a native of Cuba, left the communist island in 1961 to move to Michigan, where he was raised.

Both father and son followed similar career paths. Prior to working in real estate development, Pedro had been a partner in a large law firm.

In addition, he has both an MBA and an engineering degree. “It kind of all worked together,” Pedro says. “You always think of doing something, but never get around to starting it.”

Both father and son say the working dynamics between them has always been good. “When we started together, he had gotten out of school and learned the business well not only from me but from the other mentors,” Pedro says. “I think he got a little bit from everyone.”

“In the first few years, I listened and learned a lot,” David says. “We learned to communicate in business, not as father and son. [At times], the lines were blurred. We adversely learned the discipline of communication and respect. We would have our discussions, but at the end of the day, we knew we’d have each other’s back. We treated them as debates, not as fights.”

“We learned as we grew,” adds Pedro.

In terms of setting boundaries between family and business, sometimes it’s not easy. However, they at least try to somewhat curtail business talk when with family. “I try to avoid it; maybe make it 5 percent out of respect,” says David, noting his dad has nine grandchildren.

“I only hope I can be as good a father and husband as he’s been. He’s been a role model. Not just in business, but as a father.”