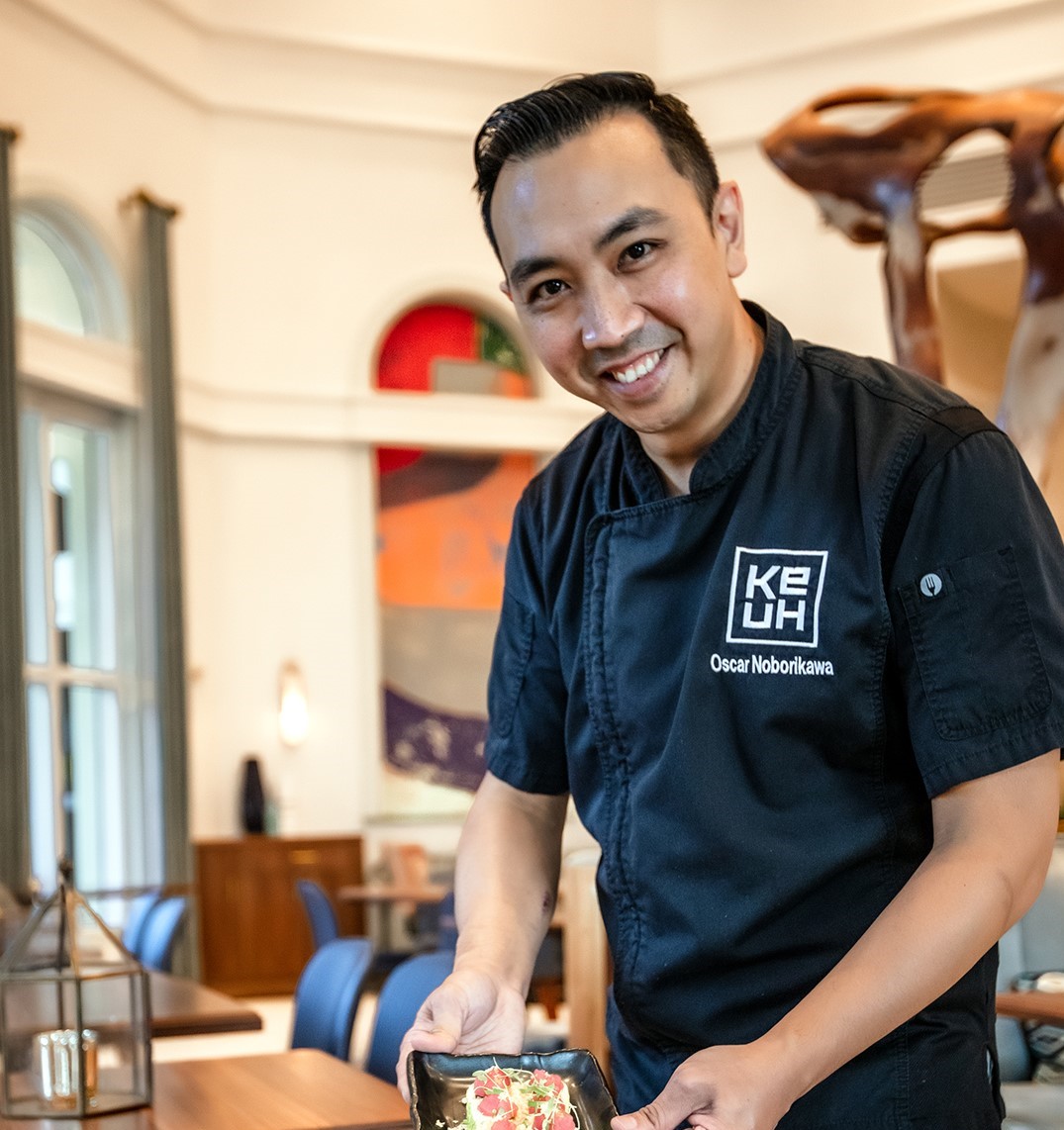 Five Things to Know About: Ke-uH

1. Key ingredients: When Acqualina Resort & Residences (acqualinaresort.com) decided to bolster its restaurant roster with cuisine that’s coveted by its clients, it wasn’t just about finding the right complement to Costa Grill (Mediterranean) and Il Mulino New York (Italian). It also was about finding the perfect partners, a kitchen team that appreciated the details that elevate a luxury property. Enter Carlos Delfino (chef/founder) and Oscar Noborikawa (master sushi chef), the creative duo behind the Japanese fusion offerings at Ke-uH, which debuted at Acqualina (17875 Collins Ave., Sunny Isles Beach) in January.

2. Past perfect: Noborikawa’s attention to the nuance and artistry that distinguish the inventive cold and hot plates, sushi rolls, and nigiri/sashimi selections at Ke-uH can be traced to his 14-year run at Nobu Miami. “Anybody can make sushi rolls,” says Noborikawa, born in Peru but of Japanese descent, who moved to Miami more than two decades ago. “It’s important for me to teach the chefs I hire now how to respect and understand the products. The discipline it takes to create these dishes. How to interact with co-workers. These are all things I learned at Nobu.

3. Spice is right: The tapas-style menu at Ke-uH is a reflection of that experience, with an emphasis on superior quality, especially when it comes to the fresh seafood—like imported Japanese hamachi yellowtail, bluefin tuna from the Mediterranean Sea, and Scottish salmon. The hamachi is featured in a cold izakaya selection that also brings the heat. “Hamachi is an oily fish, and you have to fillet it right away and keep it at just the right temperature. We want it to reach the customer in [peak] form. For the sauce, we’re using yuzu soy with jalapeno. It’s pricy, but it’s a traditional Japanese citrus flavor. It’s not something you can just substitute with lime and lemon juice. These little details are very important.

4. Roll with it: The specialty rolls, 16 of them at press time, are not to be missed. The Bea roll draws on Noborikawa’s South American background, with fried plantain joining crispy shrimp, avocado, cream cheese and eel sauce; there’s also a touch of spice thanks to the use of red chili soy paper. The skill and precision that separates the kitchen team is on full display with the riceless Ke-uH roll—a mix of kani (crab) salad, wasabi aioli, ponzu and cream cheese that uses thinly sliced tuna or salmon as the exterior instead of rice. “We tried it first with sesame paper, but it didn’t look good,” Noborikawa says. “We decided to use the protein, but it needs to be cut perfectly. There’s a lot of work behind that roll.”

5. In addition: Other popular menu selections include the spicy honey shrimp—a tempura treat with an original sauce that includes jalapeno aioli and honey, along with almonds and walnuts. The salmon truffle pear, one of the restaurant’s biggest sellers, deviates from tradition by incorporating an Asian pear (sashimi dishes in Japan typically shy away from fruit) with straight yuzu juice, white truffle oil, and micro cilantro. For those interested in a larger entrée, instead of shared-plate meal, Ke-uH serves a 16-ounce ribeye, baby back ribs in Korean barbecue sauce, Kurobuta pork belly, and herb-crusted salmon.